Elizabeth Loftus: How reliable is your memory? 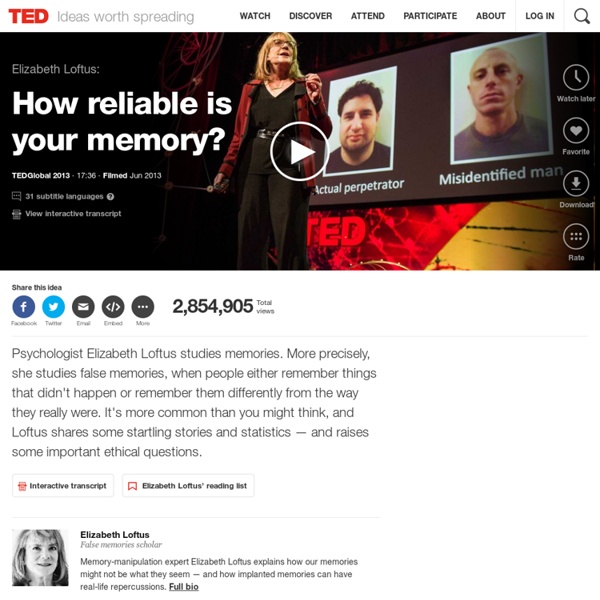 What It's Like To Live With Borderline Personality Disorder I was diagnosed with borderline personality disorder at the age of 14. Relationships feel impossible, my brain never stops running and my stress is magnified. I find it very difficult to distinguish who I actually am and who my mental illness wants me to be. For the first time in my life, I’m sharing my story of borderline personality disorder with the public. I want to relate to those who suffer with me, educate those who misjudge me and help those who want to love me. What is Borderline Personality Disorder? While the name is a bit misleading (and most experts generally agree), BPD is “a pervasive pattern of instability of interpersonal relationships, self-image and affects and marked impulsivity beginning in early adulthood and presenting in a variety of contexts as indicated by five or more of the following:” 1. 2. 3. 4. 5. 6. 7. 8. 9. Long story short, it’s very hard for those with BPD to have successful and healthy relationships and stable confidence levels. Relationships Survival Plan

60 Most Amazing Optical Illusion and Paradox Pictures You Must See An optical illusion (also known as visual illusion) is characterized by visually perceived images that differ from objective reality. The information gathered by the eye is processed in the brain to give a perception that does not tally with a physical measurement of the stimulus source. Today we’ve crawled deep into the Internet and gathered 60 incredibly amazing illusion pictures that can stimulate your brain! In this comprehensive collection, you can find many visual perceptions, optical illusions, paradoxes, and perception puzzles. You better be prepared that these images will trick your eyes to make you question whether seeing really is believing! Without further ado, let’s check out the photos and take this opportunity to exercise our mind! Tell us which optical illusion impresses you the most? Face Off The Glowing Core Look into the centre point and stare for a while. Look at the dots in the middle of image for a long time. Wheel of Confusion Which way is the wheel turning? Zebra

Interview: Scott Stossel, Author Of 'My Age Of Anxiety' : NPR Atlantic magazine editor Scott Stossel has countless phobias and anxieties — some you've heard of, others you probably haven't. "There's a vast encyclopedia of fears and phobias," he tells Fresh Air's Terry Gross, "and pretty much any object, experience, situation you can think of, there is someone who has a phobia of it." Stossel's own fears include turophobia, a fear of cheese; asthenophobia, a fear of fainting; and claustrophobia. Stossel says he wrote the book to help him understand and find relief from — or redemption in — anxious suffering. Interview Highlights On suffering from emetophobia, or a fear of vomiting The fear of vomiting, which for me is one of the most original and most acute of my fears, is actually fairly common. Both in terms of the duration of the time that I've suffered from it and its intermittent acuteness, [it's] the emetophobia [that causes the most suffering]. ... itoggle caption Michael Lionstar/Courtesy of Knopf Michael Lionstar/Courtesy of Knopf ...

Mindfully Managing Emotions | Susie Wolbe Our emotions are always with us. Reacting to our thoughts, our encounters and everything around us, often our emotions seem to have a life of their own. When confronted with something we find unpleasant or unkind, we may politely smile, rant and rave, scream and cry or simply walk away. As Zig Ziglar once said, "It's not what happens to you that matters. It's how you respond to what happens to you that makes a difference." In order for you to respond, rather than give a knee-jerk reaction, try some of these strategies: Look for three good things each day. Now, it's your turn. It's just waiting for you.

Twenty Cognitive Biases That Could Be Helping You Make Bad Decisions The human mind is a beautiful thing. Our ability to perceive, manage and express our individual experiences has been a huge reason for our success as a species. However, let’s not get too narcissistic. Cognitive scientists and psychologists call these blips "cognitive biases." This neat infographic from Business Insider, created by graphic designer Samantha Lee and reporter Shana Lebowitz, shows 20 of these cognitive biases that make us realize how irrational and malleable our little meat-bag brains can be. Image credit: Samantha Lee and Shana Lebowitz/Business Insider

What teens really want to know about sex On the first day of my Sexuality and Society class, I don’t pass around anatomy drawings. I don’t hand out pamphlets about safer sex, although those are stacked on a table near the door. Instead, the first thing I do is establish ground rules. People should speak for themselves, laughter is OK, we won’t ask “personal history” questions, and we’ll work to create a community of peers who care about and respect one another. I’m all about context. In the back corner of my classroom is an old shoebox with a hole cut into the top of it. Here are some actual questions from students and my answers to them. Why is sex so good? There are two ways to answer this question. A part of the body that brings sexual pleasure when stimulated is called an erogenous zone. The second reason sex feels good is that humans have developed the emotional capacity to feel love, intimacy, and passion. While pleasure can exist without these emotions, it is much more significant when they are present.

How To Keep Everyone At Arm’s Length And Never Enjoy An Authentic Human Connection: An Essential Guide It can be hard living as a wholly insecure, broken person drowning under the pressures of an endless parade of perceived failures . . . and that’s why I’m here to help! If you're trying to avoid a balanced life filled with love and real connections with others, I'm here to let you know—you can realize this fantasy! You have agency! In the past few years, I’ve found other ways to live (just to keep things fresh—variety being the spice of life and all), but this blissfully tortured existence used to be mine and it seems like a waste to let two and a half decades of exacting expertise go down the tubes. 1. 2. 3. 4. 5. 6. 7. 8. 9. 10. - Eat everything in sight. - Run—but propel yourself only out of self-hatred. - Pair a six-pack with a painkiller! - Fumble around with a coworker—your impending awkward interactions in the wake of the hook-up will only give you more fodder and failures to fixate on. 11. 12. 13. 14. 15.