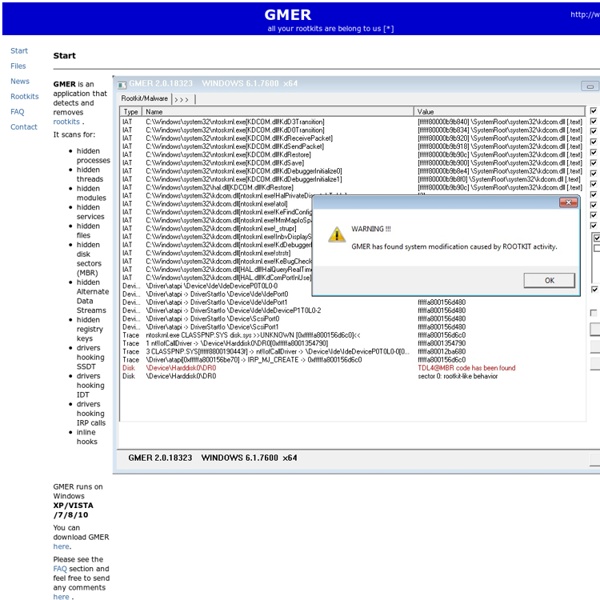 Worse than Zombies: The Mobile Botnets are Coming Nmap - Free Security Scanner For Network Exploration & Security Audits. Top 15 Security/Hacking Tools & Utilities 1. Nmap I think everyone has heard of this one, recently evolved into the 4.x series. Nmap (“Network Mapper”) is a free open source utility for network exploration or security auditing. It was designed to rapidly scan large networks, although it works fine against single hosts. Can be used by beginners (-sT) or by pros alike (–packet_trace). Get Nmap Here 2. Recently went closed source, but is still essentially free. Nessus is the world’s most popular vulnerability scanner used in over 75,000 organizations world-wide. Get Nessus Here 3. Yes, JTR 1.7 was recently released! John the Ripper is a fast password cracker, currently available for many flavors of Unix (11 are officially supported, not counting different architectures), DOS, Win32, BeOS, and OpenVMS. You can get JTR Here 4. Nikto is a good CGI scanner, there are some other tools that go well with Nikto (focus on http fingerprinting or Google hacking/info gathering etc, another article for just those). Get Nikto Here 5. 6. p0f 7. 8. 9.

The Cuckoo's Egg (book) Summary[edit] Clifford Stoll (the author) managed some computers at Lawrence Berkeley National Laboratory in California. One day, in August 1986, his supervisor (Dave Cleveland) asked him to resolve a USD$0.75 accounting error in the computer usage accounts. Over the next ten months, Stoll spent a great deal of time and effort tracing the hacker's origin. Over the course of this investigation, Stoll contacted various agents at the FBI, CIA, NSA, and Air Force OSI. Studying his log book, Stoll saw that the hacker was familiar with VMS, as well as AT&T Unix. Stoll later had to fly to Germany to testify at the trial of Hess and a confederate. References in popular culture[edit] See also[edit] References[edit] External links[edit]

How To Become A Hacker Copyright © 2001 Eric S. Raymond As editor of the Jargon File and author of a few other well-known documents of similar nature, I often get email requests from enthusiastic network newbies asking (in effect) "how can I learn to be a wizardly hacker?". Back in 1996 I noticed that there didn't seem to be any other FAQs or web documents that addressed this vital question, so I started this one. If you are reading a snapshot of this document offline, the current version lives at Note: there is a list of Frequently Asked Questions at the end of this document. Numerous translations of this document are available: ArabicBelorussianBulgarianChinese, Czech. The five-dots-in-nine-squares diagram that decorates this document is called a glider. If you find this document valuable, please support me on Patreon. The hacker mind-set is not confined to this software-hacker culture. The basic difference is this: hackers build things, crackers break them. 1.

Set Up a Home Server Setting up a home server running an open-source operating system is a popular and useful activity. Useful in what ways, you may ask. You could use it to run a website (I use a home server to power my world travel website, luxagraf.net), collect and send e-mail messages, store your OpenID credentials or serve your music around the home. As you can guess, we have a great many tutorials on Webmonkey for getting the most out of that machine in your closet. But here are some guidelines for the hardware side of it. Introduction Before You Start – Alternatives Setting up a home server can be a lot of fun and a great learning experience. What you’ll need To build your own server, you need just a few components, some or all of which you may well have already: A computer A broadband network connection A network router, with Ethernet (CAT5) cable A monitor and keyboard (just for the first few steps) A CD/DVD drive/burner will be handy if you plan to use the server for media. The computer Memory

Why Python? My first look at Python was an accident, and I didn't much like what I saw at the time. It was early 1997, and Mark Lutz's book Programming Python from O'Reilly & Associates had recently come out. O'Reilly books occasionally land on my doorstep, selected from among the new releases by some mysterious benefactor inside the organization using a random process I've given up trying to understand. One of them was Programming Python. I had already heard just enough about Python to know that it is what is nowadays called a “scripting language”, an interpretive language with its own built-in memory management and good facilities for calling and cooperating with other programs. Perl, of course, is the 800-pound gorilla of modern scripting languages. At that time, I had used Perl for a number of small projects. I immediately tripped over the first odd feature of Python that everyone notices: the fact that whitespace (indentation) is actually significant in the language syntax. Listing 1 Listing 2

The Python Tutorial — Python v2.7.1 documentation Python is an easy to learn, powerful programming language. It has efficient high-level data structures and a simple but effective approach to object-oriented programming. Python’s elegant syntax and dynamic typing, together with its interpreted nature, make it an ideal language for scripting and rapid application development in many areas on most platforms. The Python interpreter and the extensive standard library are freely available in source or binary form for all major platforms from the Python Web site, and may be freely distributed. The same site also contains distributions of and pointers to many free third party Python modules, programs and tools, and additional documentation. The Python interpreter is easily extended with new functions and data types implemented in C or C++ (or other languages callable from C). This tutorial introduces the reader informally to the basic concepts and features of the Python language and system.