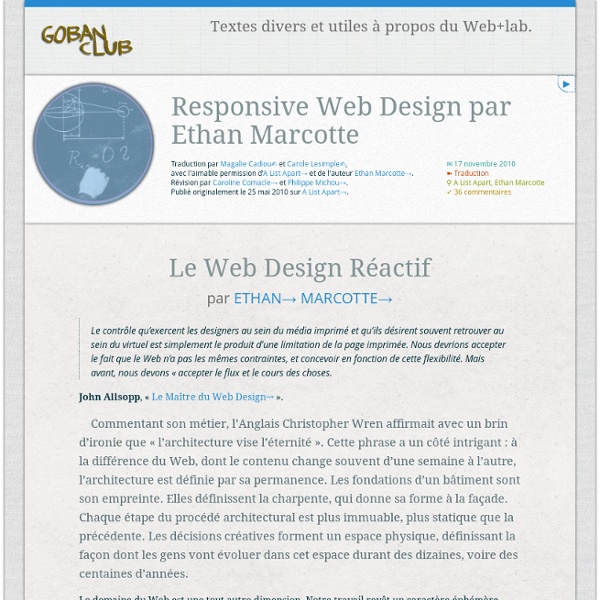 Fluid Grids Early last year, I worked on the redesign of a rather content-heavy website. Design requirements were fairly light: the client asked us to keep the organization’s existing logo and to improve the dense typography and increase legibility. So, early on in the design process, we spent a sizable amount of time planning a well-defined grid for a library of content modules. Article Continues Below Over the past few years, this sort of thinking has become more common. Thanks to the advocacy of Mark Boulton, Khoi Vinh, and others, we’ve seen a resurgence of interest in the typographic grid, and how to use it on the web. Responsive Web Design The English architect Christopher Wren once quipped that his chosen field “aims for Eternity,” and there’s something appealing about that formula: Unlike the web, which often feels like aiming for next week, architecture is a discipline very much defined by its permanence. Article Continues Below A building’s foundation defines its footprint, which defines its frame, which shapes the facade. Each phase of the architectural process is more immutable, more unchanging than the last. Creative decisions quite literally shape a physical space, defining the way in which people move through its confines for decades or even centuries.

Responsive Web Design: 50 Examples and Best Practices Responsive web design term is related to the concept of developing a website design in a manner that helps the lay out to get changed according to the user’s computer screen resolution. More precisely, the concept allows for an advanced 4 column layout 1292 pixels wide, on a 1025 pixel width screen, that auto-simplifies into 2 columns. Also, it suitably fixes on the smartphone and computer tablet screen. This particular designing technique we call “responsive design”. Now you can test your website using the Responsive Design Tool. Fluid Images — Unstoppable Robot Ninja (Hello! If you think this article’s interesting, you might check out my ALA article on responsive web design.) I’ve always hated publishing. I don’t mean the industry, but the act. Hitting “print,” sending an email, pressing that “Publish” button on the CMS: at some point, you relinquish your ability to smooth down some of the sharper edges, fill in the holes of your argument, and just generally fix whatever’s broken.

Responsive Web Design: What It Is and How To Use It - Smashing Coding Advertisement Almost every new client these days wants a mobile version of their website. It’s practically essential after all: one design for the BlackBerry, another for the iPhone, the iPad, netbook, Kindle — and all screen resolutions must be compatible, too. In the next five years, we’ll likely need to design for a number of additional inventions. When will the madness stop? It won’t, of course. Ingrid – a fluid CSS layout system Hello, my name is Ingrid Ingrid is a lightweight and fluid CSS layout system, whose main goal is to reduce the use of classes on individual units. Making it feel a bit less obtrusive and bit more fun to reflow for responsive layouts. Ingrid is also meant to be an extendable system, easy to customize to your own needs.

Responsive Design is Not About Screen Sizes Any More In March 2012, Guy Podjarny ran a test comparing the performance of hundreds of shiny new responsive websites across four different screen resolutions. The results were very dissapointing. (1) Two years into the rise of Responsive Web Design, after every imaginable sort of designer and developer had jumped into the train, it took a test to almost rock the theory to its foundations. Guy proved that almost every known responsive site was overweight.

Testing Mobile Web Sites Using Firefox Before you ever begin testing your mobile site to determine how it looks on handsets, you should make sure the functionality of the site is working as you expect. This is not always straightforward, as you want to approximate the mobile environment as closely as possible. Fortunately, Mozilla Firefox supports some great extensions that can make testing your mobile sites a piece of cake. 25 Beautiful Responsive Web Design Examples for Inspiration Six Revisions Menu Main Categories CSS HTML JavaScript Web Design WordPress Web Development Design Inspiration UX Design UI Design Freebies Tutorials Tools

Mobile web content adaptation techniques Introduction This article will help you pick from amongst the many techniques for building a mobile website. It doesn't describe how to do it, rather it instead tries to help you to pick the right approach.