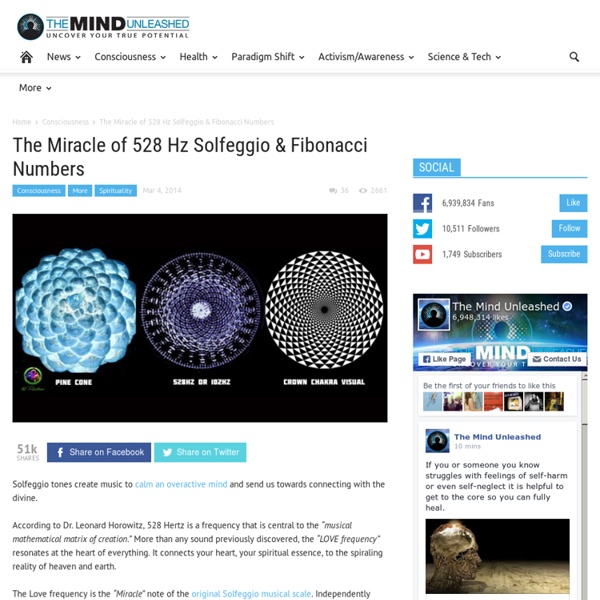 Solfeggio tones create music to calm an overactive mind and send us towards connecting with the divine. According to Dr. Leonard Horowitz, 528 Hertz is a frequency that is central to the “musical mathematical matrix of creation.” The Love frequency is the “Miracle” note of the original Solfeggio musical scale. Math scientist Victor Showell describes 528 as fundamental to the ancient Pi, Phi, and the Golden Mean evident throughout natural design. 528 resolves to a 6, the icon for physical manifestation. 528 is known as the ‘Miracle’ tone which brings remarkable and extraordinary changes. 1. an extraordinary occurrence that surpasses all known human powers or natural forces and is ascribed to a divine or supernatural cause, esp. to God. 2. a superb or surpassing example of something; wonder, marvel [1125-75]; ME <L Miraculum=Mira(Ri) to wonder at. fr(French): sighting, aiming to hold against the light. The 528Hz tone alone is associated with ‘DNA Repair‘ Their results were certified by Dr. Related:  Healing

The Effects Of Negative Emotions On Our Health Joe Martino, Collective Evolution, Guest | Humans experience an array of emotions, anything from happiness, to sadness to extreme joy and depression. Each one of these emotions creates a different feeling within the body. After all, our body releases different chemicals when we experience various things that make us happy and each chemical works to create a different environment within the body. For example if your brain releases serotonin, dopamine or oxytocin, you will feel good and happy. Convexly, if your body releases cortisol while you are stressed, you will have an entirely different feeling associated more with the body kicking into survival mode. What about when we are thinking negative thoughts all the time? Positive vs. Is there duality in our world? Cut The Perceptions As Much As Possible After thinking about it for a moment you might realize that there are in fact no positive or negative experiences other than what we define as such. Mind Body Connection You Have The Power

5 Ways to Increase Your Spiritual Awareness Many of us seem to think that being spiritual means we have to be religious. Just because you aren’t directly affiliated with a specific religion doesn’t mean you shouldn’t strive to be more spiritual. The whole concept of spiritual awareness isn’t all about connecting with a higher divine power, but also connecting with nature and yourself. Once you have established this connection, you will see life from a whole different perspective. Here are five techniques that can help you increase your spiritual awareness: Technique #1: Learn to Communicate With Your Soul Your soul is an energy entity that holds part of your awareness and memories. To communicate to your soul, you need to first believe that you have one. Technique #2: Get Plenty of Sleep Create a schedule that makes it possible for you to get at least 6 to 8 hours of sleep every night. Technique #3: Spend Time With Nature The secrets of life are embedded in nature. Technique #4: Stay Positive and Laugh Often About the Author Pao L.

The Science Of Entanglement & The Illusion Of Separation – SAND 2014 With great gratitude I found myself with like-minded scientists and thought leaders at this year’s Science and Nonduality Conference (SAND) where a common ground was sought between neuroscientists, physicists and the consciousness community. This year’s theme was “Entanglement” and recognition that “when science drills down into the core of even the most solid-looking object, separateness dissolves, and all that remains are relationships extending throughout and possibly beyond, space and time.” What is so interesting about SAND is the confluence of the nondualists who simply attribute EVERYTHING to consciousness without a need for science, and those among us whose minds still seek “answers” and for whom a scientific “explanation” makes things land more deeply. What is also so extraordinary about this conference is the ability to exchange ideas with so many different scientific and nondual thinkers (the latter being a necessary contradiction) in a nourishing environment. Dr. While Dr.

body connection The Mind Body Connection is made through the Heart. The thoughts we think in our Mind, and the emotions we feel in the Heart, give form and substance to the physical reality we experience as life. Thoughts can and do remain as unmanifested forms in the Mind unless and until we give them substance with the power of feeling and emotion. The Human Body is an instrument used by the Mind to perceive its creations. Life is a series of images and feelings parading through the Mind in an ordered and coherent fashion. "Things" that we experience as physical reality are thoughtforms given substance by feeling in the Mind. Feelings in the Heart arise from only two emotions: Love, and fear. Fear is Love turned inside out and upside down by the Ego Mind to create Illusion of Separation and make physical life exprience possible. The Ego Mind, fear, and Illusion of Separation are all necessary steps in the creation of physical reality. How does the Mind Body Connection work? But don't panic! Dr.

How to Deprogram Yourself “We are caged by our cultural programming. Culture is a mass hallucination, and when you step outside the mass hallucination you see it for what it’s worth.” -Terence Mckenna Society has undergone a mass brainwashing and it is time for us to deprogram ourselves in order to be completely immersed in the evolution of consciousness. 1. If a UFO were to land in your backyard tonight, I promise the ET will not have either a bible or money. What religion does not teach us is that we are powerful, spiritual beings without them. In the next few months or years, we can look forward to religion’s next form of mind control as they admit to the presence of extraterrestrial beings. The real truth is that the bible is just a story to keep you living in subservience, control and conformity, the same template as every government. The Solution Ask lots of questions and go within for answers. 2. When you find religion, you find money as these two tenets in life are married to one another. 3. 5. 6. 7.

The Sacred Geometry Of Music The Sacred Geometry Of Music by Andrew Lorimer Music uses the laws of vibration to manifest aurally what exists at the center of everything. Into our reality springs a non-visual harmonic law that is universal. The notes and intervals of music speak directly to the chakra centers and causes them to vibrate in harmony to the vibration of a string or vocal chords, speakers moving through the air, or the sound of someone’s lips making a farting noise through a metal tube. Music uses the laws of physics and mathematics to bring out an emotional response in the listener. The music of the Western world uses a mathematical system based on Twelve. Clock Harmonisphere The mathematics of the harmonisphere are amazing. When we measure the same chords on the harmonisphere, the seven chords have the same mirrored combinations as the piano:

What Happens After Death? New Theory Suggests Consciousness Moves To Another Universe | A book titled “Biocentrism: How Life and Consciousness Are the Keys to Understanding the Nature of the Universe“ has stirred up the internet, because it contained a notion that life does not end when the body dies, and it can last forever. The author of this publication, scientist Dr. Robert Lanza who was voted the 3rd most important scientist alive by the NY Times, has no doubts that this is possible. Beyond Time and Space Lanza is an expert in regenerative medicine and scientific director of Advanced Cell Technology Company. But not so long ago, the scientist became involved with physics, quantum mechanics and astrophysics. Lanza points to the structure of the universe itself, and that the laws, forces, and constants of the universe appear to be fine-tuned for life, implying intelligence existed prior to matter. The theory implies that death of consciousness simply does not exist. Lanza also believes that multiple universes can exist simultaneously. Multiple Worlds Soul Sources:

How To Build A 400 sqft Solar Powered Off Grid Cabin For $2k How to build a nice small cabin powered by solar panels. Lamar Alexander built this cute little 400 square foot cabin for approximately $2000, and powers it with a 570 watt solar and wind power system. The whole system is very inexpensive, and the best part is he is mortgage free. “This cabin is 14×14 with a full loft and approximately 400 square feet of living space. Power system is 580 watts Solar electric and 400 Watts wind power which powers a 12 volt fridge, lights, water pump, TV’s, laptop and many gadgets. Sources: Off Grid World

The Platonic Solids and Sacred Geometry Sacred geometry is a term which describes ... The geometrical laws which create everything in existence. This term has been used by mathematicians, geometricians, spiritual seekers, anthropologists, and archaeologists to encompass the religious, philosophical, and spiritual beliefs that have sprung up around geometry in all the major cultures during the course of human history. Every thought or emotion we produce has a specific geometrical pattern. We are aware that while the planet is under going a shift to a higher frequency that, all who reside within her energy field will also experience this realignment. Many are experiencing naturally as the planet undergoes her transformation which is what is termed the 'Creation of the Lightbody'. Many of us are enthusiastic and joyous at these changes., I would like to cover practical things that we can consciously do to build and increase the Light quotient in our own bodies. The process of transition into Light is a gradual one. 1. 2. 3. 4. 5.