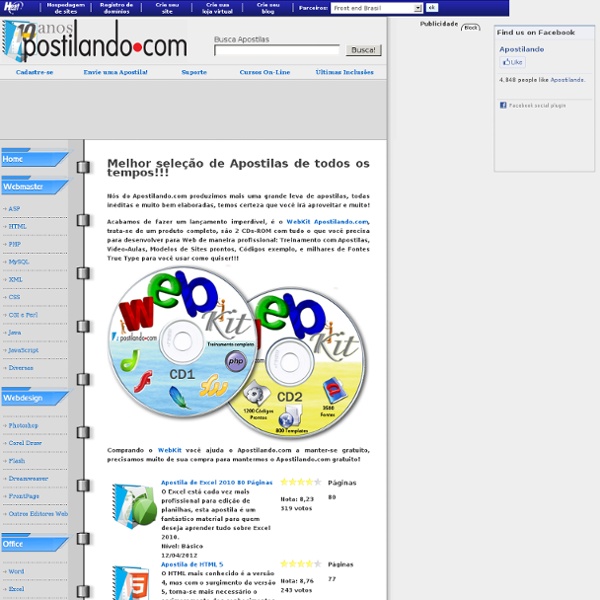 Map View Anyone seeking permission to use or reproduce the front page of a newspaper featured in our Today’s Front Pages online gallery must contact the newspaper’s publisher directly. U.S. copyright laws apply. The Newseum DOES NOT provide access to front pages from previous dates. The archives include dates of historical significance only. The Newseum is not responsible for the content on the front pages. To protect the Newseum’s agreement with the newspapers featured in the gallery, a watermark is occasionally instituted during news events of historic significance.

Projeto de Programas de Computador - Inglês When does the course begin? This class is self paced. You can begin whenever you like and then follow your own pace. It’s a good idea to set goals for yourself to make sure you stick with the course. Flash Tutorials The Illusion of Depth in Flash Learn how to use multiple layers of scrolling backgrounds to create an illusion of depth and perspective. By LearnFlash | Added on November 8, 2007 Ranking the World's Best Digital Libraries General Digital Libraries The digital libraries on this list hold the most comprehensive collection of library materials available for free online. Some of them are so old that they actually predate the web. Universal Digital Library - The million book collection.

Python vs. Java: Udacity Instructor Weighs In On Programming Languages Python, a programming language named not after a snake species but a 1970s British television comedy sketch, is gaining popularity in colleges across the US. In a recent article, ComputerWorld reported that “Python has surpassed Java as the top language used to introduce U.S. students to programming.” The article goes on to suggest that majority of top computer science departments in the US now use Python to teach coding. 7 Basic Windows PC Maintenance Tips Most small business owners don’t know much about basic computer maintenance and as a result, their PCs slow down or crash. The real issue is neglect: failing to update security patches and antivirus software, overloading the system with trial software or running five toolbars at once in Internet Explorer. Of course, many small business owners don’t know much about cars either, but they know to give it gas, change the oil every so often and to keep an eye out for flat tires.

How To Build A Startup: The Lean Launchpad When does the course begin? This class is self paced. You can begin whenever you like and then follow your own pace. It’s a good idea to set goals for yourself to make sure you stick with the course. How long will the course be available? Computer Basics: Computer Safety and Maintenance - Lesson 14 How do I keep my computer healthy? Watch the video (4:15). Computers are expensive, and with all big purchases you probably want to protect your investment. Basic Computer Maintenance - Fort Hays State University Basic Routine Maintenance for Your Computer If your computer seems to be running slower than usual, crashes unexpectedly, or is otherwise unstable, you may be in need of some basic computer maintenance. This document discusses the following basic maintenance topics: