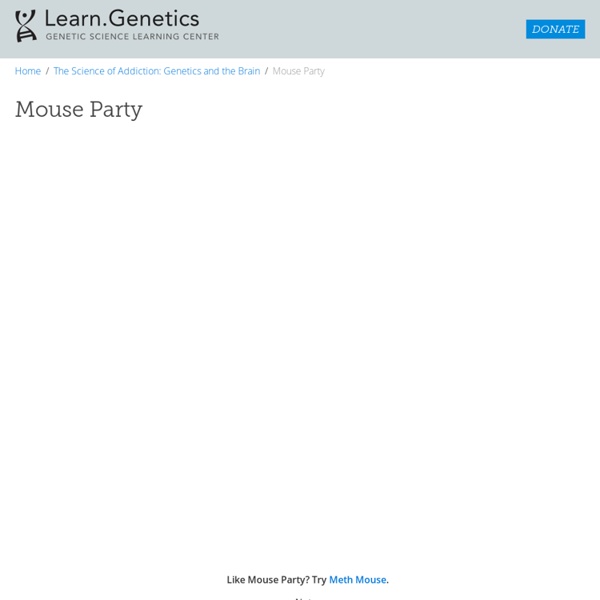 Why dread a bump on the head? The neuroscience of traumatic brain injury | Project NEURON | University of Illinois This lesson serves as the introduction to the “Why dread a bump on the head?” unit. Students are introduced to traumatic brain injury (TBI) through pictures and discussions that help students break down prior assumptions and begin to think about TBI from a scientific perspective. Students learn about and discuss the three classifications of TBI, mild, moderate, and severe. These categories are presented through the reading and discussion of news articles. Students then examine a hypothetical situation where they are the doctors on a brain injury case. In the first scene of The Golden Hour, as the player, students go out with an emergency services medical team to respond to a bike accident in which the biker hit his head.

Manipulatives neurons Lessons | BrainU The neuroscience lesson resources found here - teacher guides, student guides, handouts, overheads, software, and other supporting materials for classroom activities - are available for your download and use. Each lesson has been aligned with Minnesota Science Standards and we are in the process of aligning the lessons with the Next Generation Science Standards. All materials on this site are available at no cost for educational and non-commercial use. Lessons fall into these groups: Experiments that can be done in the classroom Experiments more easily done in a lab Dissection Model Building Experiential Stations - mini-lessons Lessons relating to the following topics are grouped on these pages: Addiction Memory Synapses Lesson documents in MS Word format are now available with lesson attachments. We welcome your suggestions on additional lesson materials that we or you can develop.

Nanoparticles and Brain Tumors Guide Activity Home Teacher's Guide Glossary Credit & Thanks Recommended Grade Levels: 10-12+ Tips for using the site with students Before using this activity in class (or at home with your kids) go through the activity once to make sure it works correctly on your computer(s). Printable activities for use in class For an assessment tool, teachers may want to have students put their names on the Worksheets and turn them in. A paper version of the chemical equation balancing activity (both standard and advanced) can be found here. A quick 10 question quiz can be found here. A brief work sheet for students can be found here. After students use the site, additional in class discussion questions (which can also act as assessment tools) can be asked: What other current uses can you think of for nanoparticles? High School Physical Science HS-PS1-6 Refine the design of a chemical system by specifying a change in conditions that would produce increased amounts of products at equilibrium. High School ELA

Deep Brain Stimulation - Teacher's Guide Activity Home Teacher's Guide Glossary Credit & Thanks Recommended Grade Levels: 7 - 12 and up WARNING: Some of the photographs and procedures in this surgery activity are rather graphic. Tips for using the site with students Before using this activity in class (or at home with your kids) go through the activity once to make sure it works correctly on your computer(s). Answers to Questions in the Activity Q1. Q2. Q3. Q4. Q5. Q6. The worksheet for this activity is optional. You can download the worksheet here. High School Life Science HS-LS1-2. High school Engineering, Technology, and Applications of Science HS-ETS1-4. CCSS High School ELA RST.9-10.2 Determine the central ideas or conclusions of a text; trace the text’s explanation or depiction of a complex process, phenomenon, or concept; provide an accurate summary of the text. Science & Technology Grades 6-8: Give examples of how technological advances, influenced by scientific knowledge, affect the quality of life. National Science Standards

The Science of Fear What are you afraid of? Snakes? Turbulence? Spiders? All of us get scared, and all of us have different thresholds for what makes us afraid. Whatever it is that scares you, what we can agree on is that fear causes our bodies to react. Well, if you are experiencing these symptoms, you have your amygdala to thank. Consider the amygdala as your own onboard 911 operator. We can learn quite a lot from animals about how we respond when we are frightened. Parts of Our Body's Fear System Amygdala: scans for threats and signals body to respond Brain Stem: triggers the freeze response Hippocampus: turns on the fight-or-flight response Hypothalamus: signals the adrenal glands to pump hormones Pre-Frontal Cortex: interprets the event and compares it to past experiences Thalamus: receives input from the senses and "decides" to send information to either the sensory cortex (conscious fear) or the amygdala (defense mechanism) Your Amygdala at Work: A STEM Activity Fear and Learning Don't Mix Oil and water.

The Man Who Mistook His Wife for a Hat | Oliver Sacks, M.D. | Author, Neurologist | On The Move, Hallucinations, Musicophilia, Awakenings, The Man Who Mistook His Wife for a Hat Here Dr. Sacks recounts the case histories of patients lost in the bizarre, apparently inescapable world of neurological disorders: people afflicted with fantastic perceptual and intellectual aberrations; patients who have lost their memories and with them the greater part of their pasts; who are no longer able to recognize people and common objects; who are stricken with violent tics and grimaces or who shout involuntary obscenities; whose limbs have become alien; who have been dismissed as retarded yet are gifted with uncanny artistic or mathematical talents. If inconceivably strange, these brilliant tales remain, in Dr. Sacks’s splendid and sympathetic telling, deeply human. They are studies of life struggling against incredible adversity, and they enable us to enter the world of the neurologically impaired, to imagine with our hearts what it must be to live and feel as they do. Praise for The Man Who Mistook His Wife for a Hat: “Dr. “Dr.

MIT discovers the location of memories: Individual neurons Update 12/2/15: We’ve now followed up on this story: The more we learn about memory, the weirder it gets. The original continues below. MIT researchers have shown, for the first time ever, that memories are stored in specific brain cells. By triggering a small cluster of neurons, the researchers were able to force the subject to recall a specific memory. By removing these neurons, the subject would lose that memory. As you can imagine, the trick here is activating individual neurons, which are incredibly small and not really the kind of thing you can attach electrodes to. Now, just to temper your excitement, we should note that MIT’s subjects in this case are mice — but it’s very, very likely that the human brain functions in the same way. In the experiment, MIT gave mice an electric shock to create a fear memory in the hippocampus region of the brain (pictured above) — and then later, using laser light, activated the neurons where the memory was stored.

The more we learn about memory, the weirder it gets For much of the history of brain science, the word “engram” has been a bit of a catch-all term, referring to the hypothetical physical incarnation of memory. If this turned out to be a storm of electrical activity, then that’s what the engram would be; if it turned out that networks of physical neurons were the home of specific memories, then an engram was that, instead. Lately, though, the word has gotten a lot more specific. Even in the past year, scientists have made incredible strides. Here is a rat set up so that certain neurons will fire in response to a UV light. Though double-stranded breaks in DNA are generally thought of as being bad for the cell, topoisomerases serve an important role in the cell, breaking, unwinding, and reconnecting the double helix if it’s about to become over-wound and tie itself up into knots. Speaking of long-term memories, a separate study found that the retrieval of long-term memories could one-day be assisted with technology.

Updated Brain Map Identifies Nearly 100 New Regions The first hints of the brain’s hidden geography emerged more than 150 years ago. In the 1860s, the physician Pierre Paul Broca was intrigued by two of his patients who were unable to speak. After they died, Broca examined their brains. On the outer layer, called the cortex, he found that both had suffered damage to the same patch of tissue. That region came to be known as Broca’s area. In recent decades, scientists have found that it becomes active when people speak and when they try to understand the speech of other people. Photo In the late 1800s, a group of German researchers identified other regions of the cortex, each having distinct types of cells packed together in unique ways. Neuroscientists have relied on his hand-drawn map ever since, adding a modest number of new regions with their own research. Three years ago, Dr. In previous attempts to map the cortex, scientists typically had looked only at one kind of evidence at a time — say, the arrangements of cells. Dr. Dr.

Mike the Headless Chicken Beheading[edit] On September 10, 1945, farmer Lloyd Olsen of Fruita, Colorado, United States, was planning to eat supper with his mother-in-law and was sent out to the yard by his wife to bring back a chicken. Olsen chose a five-and-a-half-month-old cockerel named Mike. The axe removed the bulk of the head, but missed the jugular vein, leaving one ear and most of the brain stem intact.[3][4] Due to Olsen's failed attempt to behead Mike, Mike was still able to balance on a perch and walk clumsily. When Mike did not die, Olsen instead decided to care for the bird. Fame[edit] Mike was put on display to the public for an admission cost of twenty-five cents. Death[edit] In March 1947, at a motel in Phoenix on a stopover while traveling back from tour, Mike started choking in the middle of the night. Post mortem[edit] It was determined that the axe had missed the jugular vein[6] and a clot had prevented Mike from bleeding to death. Legacy[edit] References[edit] Bibliography[edit]