How to Master on the Art of Getting Noticed: Austin Kleon’s Advice to Aspiring Artists 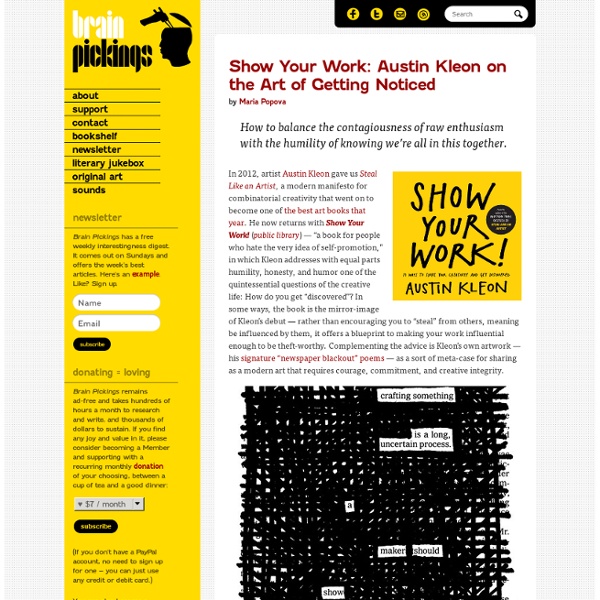 by Maria Popova How to balance the contagiousness of raw enthusiasm with the humility of knowing we’re all in this together. In 2012, artist Austin Kleon gave us Steal Like an Artist, a modern manifesto for combinatorial creativity that went on to become one of the best art books that year. He now returns with Show Your Work! (public library) — “a book for people who hate the very idea of self-promotion,” in which Kleon addresses with equal parts humility, honesty, and humor one of the quintessential questions of the creative life: How do you get “discovered”? In some ways, the book is the mirror-image of Kleon’s debut — rather than encouraging you to “steal” from others, meaning be influenced by them, it offers a blueprint to making your work influential enough to be theft-worthy. Kleon begins by framing the importance of sharing as social currency: Almost all of the people I look up to and try to steal from today, regardless of their profession, have built sharing into their routine.

World Bank Announces Open Access Policy for Research and Knowledge, Launches Open Knowledge Repository WASHINGTON, April 10, 2012 - The World Bank today announced that it will implement a new Open Access policy for its research outputs and knowledge products, effective July 1, 2012. The new policy builds on recent efforts to increase access to information at the World Bank and to make its research as widely available as possible. As the first phase of this policy, the Bank launched today a new Open Knowledge Repository and adopted a set of Creative Commons copyright licenses. The new Open Access policy, which will be rolled out in phases in the coming year, formalizes the Bank’s practice of making research and knowledge freely available online. Now anybody is free to use, re-use and redistribute most of the Bank's knowledge products and research outputs for commercial or non-commercial purposes. “Knowledge is power,” World Bank Group President Robert B.

You Are Not So Smart: A Field Guide to the Brain’s Guile by Maria Popova The science of why 600 Facebook “friends” are an illusion, or why brand loyalty is a product of the ego. We spend most of our lives going around believing we are rational, logical beings who make carefully weighted decisions based on objective facts in stable circumstances. Of course, as both a growing body of research and our own retrospective experience demonstrate, this couldn’t be further from the truth. For the past three years, David McRaney’s cheekily titled yet infinitely intelligent You Are Not So Smart has been one of my favorite smart blogs, tirelessly debunking the many ways in which our minds play tricks on us and the false interpretations we have of those trickeries.

Microsoft Word is cumbersome, inefficient, and obsolete. It’s time for it to die. Image from Wikipedia. Nearly two decades and several text-handling paradigms ago, I was an editorial assistant at a weekly newspaper, where a few freelancers still submitted their work on typewritten pages. Stories would come in over the fax machine. If the printout was clear enough, and if our giant flatbed scanner was in the mood, someone would scan the pages in, a text-recognition program would decipher the letters, and we would comb the resulting electronic file for nonsense and typos.

Open access dominates discussions at London Book Fair 27 May 2014 Alastair Horne reports back on discussions in the scholarly information stream of this year’s London Book Fair Inevitably, the subject of open access (OA) dominated discussion of academic publishing at this year’s London Book Fair. Networked Knowledge and Combinatorial Creativity by Maria Popova Why creativity is like LEGO, or what Richard Dawkins has to do with Susan Sontag and Gandhi. In May, I had the pleasure of speaking at the wonderful Creative Mornings free lecture series masterminded by my studiomate Tina of Swiss Miss fame. I spoke about Networked Knowledge and Combinatorial Creativity, something at the heart of Brain Pickings and of increasing importance as we face our present information reality. The talk is now available online — full (approximate) transcript below, enhanced with images and links to all materials referenced in the talk. These are pages from the most famous florilegium, completed by Thomas of Ireland in the 14th century.

How I Went From Writing 2,000 Words a Day to 10,000 Words a Day When I started writing The Spirit War (Eli novel #4), I had a bit of a problem. I had a brand new baby and my life (like every new mother's life) was constantly on the verge of shambles. I paid for a sitter four times a week so I could get some writing time, and I guarded these hours like a mama bear guards her cubs - with ferocity and hiker-mauling violence. To keep my schedule and make my deadlines, I needed to write 4000 words during each of these carefully arranged sessions. I thought this would be simple. After all, before I quit my job to write full time I'd been writing 2k a day in the three hours before work. Amazon is testing “Kindle Unlimited,” an ebook subscription service for $9.99/month Amazon is testing an ebook and audiobook subscription service called “Kindle Unlimited” that offers “unlimited access to over 600,000 titles and thousands of audiobooks on any device for just $9.99 a month.” Most of the test pages were pulled down Wednesday after some users on the Kindle Boards noticed them, but they are still available through Google Cache and some are still live on Amazon’s site. Amazon’s service, which has been rumored for a couple of months, would compete with existing ebook subscription services Scribd and Oyster.

How Our Minds Mislead Us: The Marvels and Flaws of Our Intuition by Maria Popova “The confidence people have in their beliefs is not a measure of the quality of evidence but of the coherence of the story that the mind has managed to construct.” Every year, intellectual impresario and Edge editor John Brockman summons some of our era’s greatest thinkers and unleashes them on one provocative question, whether it’s the single most elegant theory of how the world works or the best way to enhance our cognitive toolkit.