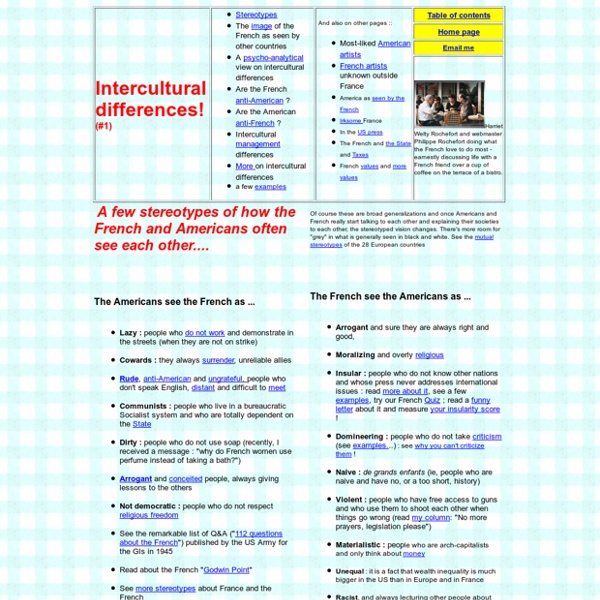 Website lists Americans’ top 10 prejudices about the French – The Connexion AMERICANS see the French as hairy communists who don’t wash but who are also chic and sophisticated, says a French news site. The website of leading private TV channel TF1 listed what it thinks are the top 10 prejudices Americans have about the French, based on their portrayal in the US media. TF1 said Americans seem to think: 1. 2. 3. 4. 5. 6. 7. 8. 9. 10. Photo:Chris Waits EmailStumbleUpon The business strategy behind Disney’s magical experiences Last week, 250 GTA business professionals participated in “Disney’s Approach to Business Excellence,” an all day workshop offered through the Disney Institute and organized by McMaster University’s DeGroote School of Business in partnership with the Certified General Accountants of Ontario (CGA). Workshop attendees watched case studies, answered questions, and participated in several group exercises led by Bryan Tabler and Amy Rossi, two facilitators from the Disney Institute and veteran employees of Disney. The goal of the day was to learn the strategies Disney believes are key to the successful maintenance of The Walt Disney Company. Leadership Excellence According to the Disney Institute, the foundation for successful leaders is communication. “The word ‘no’ shuts down hopes,” said Bryan Tabler, Disney Institute facililtator. Sylvia Scott is the donor relations representative for the Salvation Army. “I came here thinking it would be primarily about customer service,” said Ms. Ms.

French stereotypes: arrogant and good in bed? Bien sûr! Let's not throw out the cliches with the bathwater. Apart from the fact that they conceal a fair bit of truth, these stereotypical preconceptions that seem to stick so strongly to our French identity might also help us close ranks. So, we're supposedly arrogant and chauvinistic – compliments that generally go hand in hand with a suspicion of cowardice. The rude health of this particular stereotype is not unrelated to the current financial and monetary crisis, in which France has been unable to disguise the difficulty it is having in maintaining its role – or what it believes to be its role – on the European stage. Confronted with the fact of German leadership, we supposedly hit back with thunderous rants and rash behaviour. Strike lovers Proud of our keen sense of inequality, it's almost disappointing for us not to hear our neighbours cite the traditional French propensity to strike – a tradition, nonetheless, that's largely disproved by statistics on the weakness of our trades unions.

Introduction to Principles of Management Figure 1.1 The restaurant industry poses many challenges to the successful management of individuals and groups. Chapter Learning Objectives Reading this chapter will help you do the following: Learn who managers are and about the nature of their work. Understand the importance of leadership, entrepreneurship, and strategy within organizations. Thomas Edison once quipped, “There is a way to do it better—find it.” Management is the art and science of managing others.

55 National Stereotypes that will Ruin or Make your Day | National Stereotypes Inspired by an idea of Mon earlier on this post, I searched the net far and wide to find the most common stereotypes about Nationalities. Generalizations about cultures or nationalities can be a source of pride, anger or simply bad jokes. Some people say that in all stereotype there is some basis in reality, as they don’t develop in vacuum. To give a more serious definition: “National Stereotype is a system of culture-specific beliefs connected with the nationality of a person. True cold-blooded scientists warn, that “National character stereotypes are not even exaggerations of real differences: They are fictions.” But why judge, before we know what we are talking about? Please take everything below with a grain of salt; as I only summed up what others wrote on the internet. There are plenty of scientific studies about this subject on the net as well. After reading all those stereotypes, I’m a bit shocked that a lot of them – if not most – are pretty negative or even insulting.

Elton Mayo and Hawthorne Effect - Studies in Motivation The Hawthorne Studies (also knowns as the Hawthorne Experiments) were conducted from 1927 to 1932 at the Western Electric Hawthorne Works in Cicero, Illinois (a suburb of Chicago). This is where Harvard Business School professor Elton Mayo and Fritz Roethlisberger examined the impact of work conditions in employee productivity. Elton Mayo started these experiments by examining the physical and environmental influences of the workplace (e.g. brightness of lights, humidity) and later, moved into the psychological aspects (e.g. breaks, group pressure, working hours, managerial leadership) and their impact on employee motivation as it applies to productivity. In essence, the Hawthorne Effect, as it applies to the workplace, can be summarized as "Employees are more productive because the employees know they are being studied." Additionally, the act of measurement, itself, impacts the results of the measurement. The Hawthorne Experiments and Employee Motivation Relay Assembly References:

What's True About French Stereotypes? Author: Maggie Lonsdale BA (hons) - Updated: 20 April 2011| Comment Are stereotypes about the French really true? Well, think of a typical French person and what do you see? Well, they're all true! Different Stereotypes However, there are many more ingredients in French soup! Or could it be the elderly lady, walking slowly around the supermarket looking for a bargain. Perhaps it is the silver-haired biker with the regulation sideburns and cowboy boots. Or maybe it is the middle aged woman who serves you at the boulangerie. Outdated Stereotypical French Traits Then again, maybe even you won't realise they are French at all. Nowadays, a French youth is virtually indistinguishable from his or her UK counterpart. Go into any Apple store and see the identikit hipsters with their facial hair and oversized horn rimmed glasses. Embracing Society Refreshingly, there is a somewhat different attitude towards those following a more 'alternative' lifestyle. The French do like to enjoy life though.

10 Common Time Management Mistakes - from Mind Tools.com Avoiding Common Pitfalls Learn how to overcome several common time management mistakes. How well do you manage your time? If you're like many people, your answer may not be completely positive! Perhaps you feel overloaded, and you often have to work late to hit your deadlines. Or maybe your days seem to go from one crisis to another, and this is stressful and demoralizing. Many of us know that we could be managing our time more effectively; but it can be difficult to identify the mistakes that we're making, and to know how we could improve. In this article, we're looking at ten of the most common time management mistakes, as well as identifying strategies and tips that you can use to overcome them. Mistake #1. Do you ever have that nagging feeling that you've forgotten to do an important piece of work? The trick with using To-Do Lists effectively lies in prioritizing the tasks on your list. Mistake #2. Do you know where you'd like to be in six months? Mistake #3. Mistake #4. Mistake #5.

French Stereotypes Nothing Nouveau They don't bathe. Their women are loose. In war they're quick to surrender and have to be rescued by Americans. These and other choice stereotypes about the French have been flying about since their government defied the American line on Iraq. Written nearly 60 years ago, "112 Gripes about the French" was a U.S. Revived under the charitably translated title, "Nos Amis, Les Francais," ("Our Friends, the French"), the booklet has become a hit in France. As a history lesson, the book shows that once the euphoria of liberation from Hitler's army wore off, it wasn't all chocolates, chewing gum and kisses that were being exchanged between the French and the GIs. In question-and-answer format, it lists 112 impressions among the GIs about the French that its author debunks, explains or, in rare cases, confirms. If the French seem unwashed (criticism No. 45), it's because the Germans hogged the soap, the book explains. Gripe 56: French women are "immoral." Much of the book praises the French.

How to Make Good Decisions ... Faster Take a look at this paragraph: Cna yuo raed tihs? I cdn'uolt blveiee taht I cluod aulaclty uesdnatnrd waht I was rdanieg. The phaonemnel pweor of the hmuan mnid, aoccdrnig to a rsereeachr at Cmabrigde Uinervtisy, it dseno't mtaetr in waht oerdr the ltteres in a wrod are, the olny iproamtnt tihng is taht the frsit and lsat ltteers be in the rghit pclae. Isn't it astounding how easily you can decipher words with information that is ambiguous, garbled or less than complete? The 80/20 Rule is pervasive in our world: 80% of traffic jams occur on 20% of roads.80% of beer is consumed by 20% of drinkers.80% of classroom participation comes from 20% of students.80% of profits come from 20% of customers. Applying the 80/20 Rule to your thinking can help you make smarter, faster, more intuitive decisions. In most situations, you can gather 80 percent of the relevant information in the first 20 percent of the time available. So quit analyzing everything and, instead, follow your intuition.