Etymology: Languages that have contributed to English vocabulary over time. 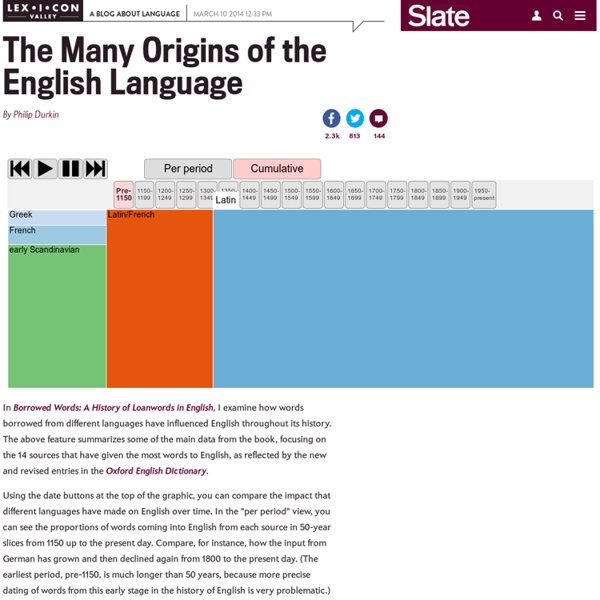 In Borrowed Words: A History of Loanwords in English, I examine how words borrowed from different languages have influenced English throughout its history. The above feature summarizes some of the main data from the book, focusing on the 14 sources that have given the most words to English, as reflected by the new and revised entries in the Oxford English Dictionary. Using the date buttons at the top of the graphic, you can compare the impact that different languages have made on English over time. In the "per period" view, you can see the proportions of words coming into English from each source in 50-year slices from 1150 up to the present day. If you switch to the "cumulative" view, then you can see how the total number of loanwords from each language has built up over time. The data lying behind this graphic reflects some of the biggest changes in the history of English. The elephant in the room, however, is how Latin and French dominate the picture in just about every period. Related:  DICOS, EXERCICES, LANGUE. • AMD : English Language

Language Timeline The English language is a vast flea market of words, handed down, borrowed or created over more than 2000 years. And it is still expanding, changing and trading. Our language is not purely English at all - it is a ragbag of diverse words that have come to our island from all around the world. View the chart below to get an overview of some of the many chapters in the history of the English language. Celts 500BC-43BC Romans 43BC-c.450AD Anglo Saxons 449AD St Augustine 597 AD Vikings 789AD Normans 1066 100 Years War 1337-1450s Renaissance 1476-1650 1700s Industrial Revolution 1760-1800s 1900s - Present Day References: The Cambridge Encyclopedia of the English Language by David Crystal Words in Time by Geoffrey Hughes

Do you speak Uglish? How English has evolved in Uganda Please don’t dirten my shirt with your muddy hands. Stop cowardising and go and see that girl. Don’t just beep her again, bench her. Typos? Some will be immediately obvious to English speakers: dirten, meaning to make dirty; cowardising, to behave like a coward. Others offer small insights into youth culture: beep – meaning to ring someone but to hang up quickly before the person answers. Now, Bernard Sabiti, a Ugandan cultural commentator has recorded these colloquialisms in a new book which attempts to unlock what he calls “one of the funniest and strangest English varieties in the world”. Working as a consultant for international NGOs, Sabiti kept being asked “what kind of English do Ugandans speak?” The result? Sabiti says the rise of Uglish directly correlates with a fall in the standards in education. Though not exclusive to the younger generation, the majority of words chronicled in his book are influenced by youth culture. But this is not a linguistic phenomena unique to Uganda.

200 Latin Roots to Improve Your Vocabulary Posted on 09. Apr, 2014 by Brittany Britanniae in Latin Language Whenever learning a new language, students are often overwhelmed by the fact that they must study the grammar and vocabulary. Vocabulary can be tough for anyone, but especially for those learning a new language for the first time or one like Latin which not spoken. However, the vocabulary in Latin should be easier since Latin is integrated into many modern languages: French, Italian, Spanish, English, etc. Here is a wonderful list of the most basic roots any Latin learner should know! Tags: Latin grammar, Latin language, Latin vocabulary Share this Post! About Brittany Britanniae Hello There!

conjugate Latin verbs The Latin language was the language of the Roman Empire. Verbix shows the verb inflections of the Classic Latin (CL). From CL, Vulgar Latin (VL) developed. The VL is the base for the today's Romance languages. Entering verbs Unlike some grammar books do, Verbix does not implement j in the Latin ortography. The following map shows the extension of the Latin and Greek in the Roman Empire AD 117. The Vulgate The Vulgate is the Bible translation from ca. 400AD written in Latin... Literature sources English language 'originated in Turkey' Modern Indo-European languages - which include English - originated in Turkey about 9,000 years ago, researchers say. Their findings differ from conventional theory that these languages originated 5,000 years ago in south-west Russia. The New Zealand researchers used methods developed to study virus epidemics to create family trees of ancient and modern Indo-European tongues to pinpoint where and when the language family first arose. Their study is reported in Science. A language family is a group of languages that arose from a common ancestor, known as the proto-language. Linguists identify these families by trawling through modern languages for words of similar sound that often describe the same thing, like water and wasser (German). According to the Ethnologue database, more than 100 language families exist. The Indo-European family is one of the largest families - more than 400 languages spoken in at least 60 countries - and its origins are unclear.

Latin umerals Latin Numerals Posted on 25. Feb, 2012 by leire in Latin Language The cardinal numerals The cardinal numerals express the number or quantity. Most of the cardinal did not decline, the only ones that were declined are: The numeral centum (“hundred”) can not be declined, but the other hundreds are declined like the plural of an adjective of the first class. The numeral mille (‘thousand’)can not be declined, but the other thousands are expressed by the plural milia, milium, which is declined as an neuter of the third declension. The ordinal numerals The ordinal numerals add to the idea of number ​​the idea of ​​order. simplex, simplicis: simple.duplex, duplicis: double.triplex, triplicis: triple.quadruplex, quadruplicis: quadruple.quintuplex, quintuplicis: quintuple.decemplex, decemplicis: tenfold.centumplex, centumplicis: hundredfold. The distributive numerals Indicate groups of individuals, so singular form does not exist. Tags: Latin, Latin grammar, Latin language, numerals Share this Post!

How the internet is killing off silent letters Professor David Crystal says people drop letters when typing them into search engines He says the internet will influence changes in spelling in the future Academic labels the 'h' in rhubarb as 'illogical' By Daily Mail Reporter Published: 08:29 GMT, 2 June 2013 | Updated: 06:40 GMT, 3 June 2013 David Crystal, professor of linguistics of Bangor University, explained how people are dropping letters when typing words into search engines Common misspellings of English words could be acceptable within a few years because they are used online, a linguist has said. ‘Rhubarb’ could change to ‘rubarb’, ‘receipt’ to ‘receit’ and ‘necessary’ to ‘neccesary’. Simpler online forms of ‘irritating’ complex words are starting to affect mainstream usage, linguistics professor David Crystal told the Hay Literary Festival. He started monitoring the word ‘rhubarb’ ten years ago by typing the correct spelling into a search engine, then the error ‘rubarb’. ‘Rhubarb is still the dominant one by a factor of 50.

The Bridge: Customizable Greek and Latin Vocabulary Lists Origin of the English Language The origins of the English language have been explored by many scholars, and the evolution from English’s roots to today’s modern tongue has been heavily documented. Contradictory Beginnings The English language originated from the Germanic peoples of Western Europe. A proto-language is a common ancestor of younger languages, and for the Germanic tribes this early form of English was the Indo-European proto-language. Recent research suggests, however, that the Indo-European languages actually stemmed from the Anatolian region of Turkey 9,000 years ago. The Rise of Old English After the Anglo-Saxon migration, the indigenous Latin and British tongues began to be displaced by the Germanic tongues, which also began to absorb elements of the former languages. Latin would be reintroduced to England by Roman church missionaries, and play a heavy role in the development of Old English. The Spread of Middle English The Evolution into Modern English