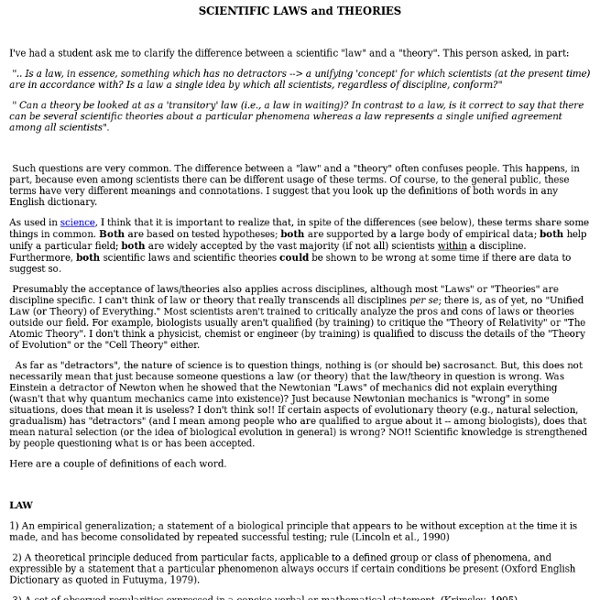 SCIENTIFIC LAWS and THEORIES I've had a student ask me to clarify the difference between a scientific "law" and a "theory". This person asked, in part: ".. Is a law, in essence, something which has no detractors --> a unifying 'concept' for which scientists (at the present time) are in accordance with? Is a law a single idea by which all scientists, regardless of discipline, conform?" " Can a theory be looked at as a 'transitory' law (i.e., a law in waiting)? Such questions are very common. As used in science, I think that it is important to realize that, in spite of the differences (see below), these terms share some things in common. Presumably the acceptance of laws/theories also applies across disciplines, although most "Laws" or "Theories" are discipline specific. As far as "detractors", the nature of science is to question things, nothing is (or should be) sacrosanct. Here are a couple of definitions of each word. 4) 1. Literature Cited Futuyma, D. Krimsley, V. Lincoln, R. Moore, J. Related:  Misconceptions about laws and theories • Nature of Science

Myths of the nature of science People have ideas about science based on personal experiences, previous education, popular media and peer culture. Many of these ideas are commonly held misconceptions or myths about the nature of science. Here are some of the more common myths that are problematic in science education. Myth: The scientific methodMyth: Experiments are the main route to scientific knowledgeMyth: Science and its methods can answer all questionsMyth: Science proves ideasMyth: Science ideas are absolute and unchangingMyth: Science is a solitary pursuitMyth: Science is procedural more than creativeMyth: Scientists are particularly objectiveMyth: Scientific conclusions are reviewed by others for accuracyMyth: Acceptance of new scientific knowledge is straightforwardMyth: Science models ‘are real’Myth: A hypothesis is an educated guessMyth: Hypotheses become theories that, in turn, become laws Myth: The scientific method In reality there is no single method of science. Myth: Science proves ideas

Science Teaching Reconsidered: A Handbook image of a sun that moves about the earth. In school, students are told by teachers (years after they have already formed their own mental model of how things work) that the earth rotates. Students are then faced with the difficult task of deleting a mental image that makes sense to them, based on their own observations, and replacing it with a model that is not as intuitively acceptable. The example of the earth rotating rather than the sun orbiting the earth is one of many that teachers refer to collectively as misconceptions. Preconceived notions are popular conceptions rooted in everyday experiences. Although vernacular and factual misconceptions can often be easily corrected, even by the students themselves, it is not effective for a teacher simply to insist that the learner dismiss preconceived notions and ingrained nonscientific beliefs.

Laws and Theories Among the Common People | Staring at the Ceiling, Among Other Things I guess it’s fair to say that the scientific community has not done so well in constructing its jargon vocabulary. That being said, it’s actually kind of sad how little people know outside of the scientific community, but are so prepared to argue for or against topics that they don’t know much about. I came across an article today that talks about the discovery of a new dinosaur, from which birds may have evolved. You can read about it here: I always like to scroll through the comments just to read what others have to say about the topics I’m reading; but reading these comments was worse than nails on a chalkboard. “Technically reality itself is a theory. Just stop for a second and read those comments. FALSE. A scientific law is a description of an observed phenomenon. This law describes how point masses will interact with each other by the force of gravity. Stay educated my friends. Like this:

What is the difference between a theory and a law? I recently read a journal article* that spurred my curiosity. The author stated, "Individuals often hold a simplistic, hierarchical view of the relationship between theories and laws whereby theories become laws depending on the availibility of supporting evidence." He added, "theories and laws are different kinds of knowledge and one can not develop or be transformed into the other" and, "theories are as legitimate a product of science as laws." Throughout my years of undergraduate and graduate education, I have been taught this "hierarchical view" of theories and laws. *Lederman, N.G. 1998. (I was unable to locate The Electronic Journal of Science, so I linked to another presentation of the same material.) This is a common question, and a common misconception. The current consensus among philosophers of science seems to be this: Laws are generalizations about what has happened, from which we can generalize about what we expect to happen.

10 Characteristics of Scientists | Human Nature Concepts Do you diligently watch Big Bang Theory reruns? Sneak into Star Trek conventions in strange cities? While TV’s Big Bang nerds are cast as socially inept, it’s likely the coolest kids would be envious of their social network. Like most things in life, it’s not what you know but how you use it. Time to rethink scientist’s bad rep. Chemist from NYC Tech Day (google???) Believing human behavior mimics the laws of science, what makes a good scientist? Here’s a compilation of the best scientists 10 characteristics. 1. Do we love George because he’s a monkey – or because of his mischievous and enviable curiosity? 2. 3. Observing life through a kaleidoscope 4. 5. 6. 7. Ever notice how all the really cool science stuff is for kids? 8. 9. 10. Perhaps what I love most about this list is how ubiquitous these characteristics are for any person interested in a full life.

Theory Oddly enough, one of the most important aspects of science is also one of those most frequently misunderstood. That, of course, is the concept of a "theory." The problem is that this is one of those words which has two meanings. There's the common meaning, which is much like what a scientist would call a "hypothesis." Then there's the scientific meaning, which is much, much more. Knowing We learn our universe by experience; pretty much all of our useful knowledge is experiential. As our library of fact information increases, our brains do something which is apparently deeply innate to us: they form patterns. Thus, if I asked you what you knew about ice, you'd have no hesitation telling me that ice is cold. In fact, under the right conditions, water will freeze at room temperature, so while your knowledge about ice is very useful to you, it isn't actually completely correct. This bit of knowledge--that ice is cold--is what we call a posit. Here's an example. The Posits of Science

Chapter 1: The Nature of Science Chapter 1: THE NATURE OF SCIENCE Over the course of human history, people have developed many interconnected and validated ideas about the physical, biological, psychological, and social worlds. Those ideas have enabled successive generations to achieve an increasingly comprehensive and reliable understanding of the human species and its environment. It is the union of science, mathematics, and technology that forms the scientific endeavor and that makes it so successful. This chapter lays out recommendations for what knowledge of the way science works is requisite for scientific literacy. Scientists share certain basic beliefs and attitudes about what they do and how they view their work. The World Is Understandable Science presumes that the things and events in the universe occur in consistent patterns that are comprehensible through careful, systematic study. Scientific Ideas Are Subject To Change Science is a process for producing knowledge. Scientific Knowledge Is Durable

Related:
Related:  Misconceptions about laws and theories   -  Nature of Science