Sarah-Jayne Blakemore: The mysterious workings of the adolescent brain 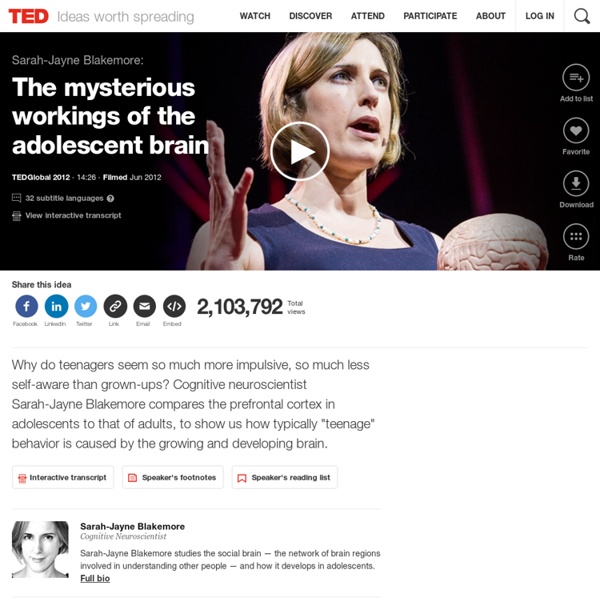 Online Communication and Adolescent Social Ties: Who benefits more from Internet use?* - Lee - 2009 - Journal of Computer-Mediated Communication Abstract Literature suggests 4 hypotheses to explain social outcomes of online communication among adolescents: displacement, increase, rich-get-richer, and social-compensation hypotheses. The present study examines which hypothesis is supported, considering differences in social ties (time vs. quality of social relationships; parent-child relationships; friendships; school connectedness). This study's sample was 1,312 adolescents ages 12 to 18. Introduction Among American households with 8- to 18-year-olds, 85 percent have personal computers. The observation that a computer is placed in an individual's room rather than a family room and that a child uses a computer alone without any other family members' presence amplifies concerns about social isolation and harmful influences on children's social development (Roberts, Foehr, Rideout, & Brodie, 1999). Displacement Hypothesis Increase Hypothesis Rich-Get-Richer Hypothesis Social Compensation Hypothesis Summary

Reviving Ophelia: Saving the Selves of Adolescent Girls: Mary Pipher, Ruth Ross: 9781594481888: Amazon.com: Books Neuroscience Cannae Do It Cap’n, It Doesn’t Have the Power The brain has hit the big time. Barack Obama has just announced $100 million of funding for the BRAIN Intitiative—an ambitious attempt to apparently map the activity of every neuron in the brain. On the other side of the Atlantic, the Human Brain Project will try to simulate those neurons with a billion euros of funding from the European Commission. And news about neuroscience, from dream-decoding to mind-melding to memory-building, regularly dominates the headlines. But while the field’s star seems to be rising, a new study casts a disquieting shadow upon the reliability of its results. Statistical power refers to the odds that a study will find an effect—say, whether antipsychotic drugs affect schizophrenia symptoms, or whether impulsivity is linked to addiction—assuming those effects exist. But if studies are generally underpowered, there are more worrying connotations beyond missed opportunities. Across the sciences These problems are far from unique to neuroscience.

How Exercise Could Lead to a Better Brain The most persuasive evidence comes from several new studies of lab animals living in busy, exciting cages. It has long been known that so-called “enriched” environments — homes filled with toys and engaging, novel tasks — lead to improvements in the brainpower of lab animals. In most instances, such environmental enrichment also includes a running wheel, because mice and rats generally enjoy running. Until recently, there was little research done to tease out the particular effects of running versus those of playing with new toys or engaging the mind in other ways that don’t increase the heart rate. So, last year a team of researchers led by Justin S. Rhodes, a psychology professor at the Beckman Institute for Advanced Science and Technology at the University of Illinois, gathered four groups of mice and set them into four distinct living arrangements. Afterward, Rhodes’s team put the mice through the same cognitive tests and examined brain tissues.

Sarah-Jayne Blakemore: The mysterious workings of the adolescent brain | TED Talk Subtitles and Transcript Fifteen years ago, it was widely assumedthat the vast majority of brain developmenttakes place in the first few years of life.Back then, 15 years ago, we didn't have the abilityto look inside the living human brainand track development across the lifespan.In the past decade or so, mainly due to advancesin brain imaging technologysuch as magnetic resonance imaging, or MRI,neuroscientists have started to look inside the livinghuman brain of all ages, and to track changesin brain structure and brain function,so we use structural MRI if you'd like to take a snapshot,a photograph, at really high resolution of the insideof the living human brain, and we can ask questions like,how much gray matter does the brain contain,and how does that change with age?And we also use functional MRI, called fMRI,to take a video, a movie, of brain activitywhen participants are taking part in some kind of tasklike thinking or feeling or perceiving something. So for example, take risk-taking.

Día de los Muertos Is Not Halloween | Daniel Cubias Back in the 1960s, the great essayist Joseph Mitchell wrote about his awe at seeing murals depicting "animated skeletons mimicking living human beings engaged in many kinds of human activities, mimicking them and mocking them.... I was astonished by these pictures." He was describing, of course, the imagery of Día de los Muertos. In Mitchell's era, the Latin American holiday was exotic and largely unknown to U.S. readers, and he was performing his writerly duty of passing along intriguing cultural information to his audience. Today, we all are familiar with Día de los Muertos -- the white face paint on celebrants, the ubiquitous illustrations of grinning skulls, the small panoramas of skeleton musicians and dancers. However, there is still great confusion in America about what this holiday actually signifies. Día de los Muertos is a time for people to pray for and remember friends and family members who have died. Halloween, in contrast, long ago lost its religious and spiritual roots.

Why Young Adults are Leaving the Church | RELEVANT Magazine What does it say about our generation that 40 to 50 percent of young Christians fail to stick with their faith or connect with a church after high school? Most likely, you’ve experienced or been witness to this exodus of twentysomethings from the faith community. At this point, it’s not even surprising to watch young adults become disillusioned with church as they go to college, build a career, start a family or begin their “real life”. But can it be stopped? We recently spoke to Kara Powell, executive director of Fuller Youth Institute and co-author of Sticky Faith, to answer just that. Do you think young people are just leaving the church, or leaving faith? Probably my best answer to that is to describe what Tim Clydesdale—who is a sociologist in New Jersey—refers to as “the identity lock-box.” Do you think there are any misunderstandings or misconceptions that contribute to young adults leaving the church? Are these mindsets limited only to young adults, or does it affect all ages?

"Moving to the beat" improves timing perception | Fiona Manning to half of the blocks (movement condition) and to remain stillduring the other blocks (no-movement condition). Four of the8 trials within each block included an on-time (i.e., at anoffset of 0 ms) probe tone, with the others at one of four offsets: either 30 % or 15 % of the IOI (both early and late).Participants experienced each of the four IOI (400 ms,600 ms) × movement condition (movement, no movement)combinations twice after completing 5 warm-up trials. (i.e., consistent with the repeated se-quence) and indicated their confidence on a scale from 1( not atall confident ) through 5 ( veryconfident ).To helpretainattention, participants received feedback on the correctness of these judgments. Participants Forty-eight undergraduates from the McMaster University Psychology participant pool participated in ex-change for course credit. n = 2), failed to tapduringmorethan25%ofthemovementtrials( =2),orfailedto tap on at least 50 % of the beats within the timekeepingsegment ( = 4). p correct t d < .0001.

Allan Jones: A map of the brain | TED Talk Subtitles and Transcript Humans have long held a fascinationfor the human brain.We chart it, we've described it,we've drawn it,we've mapped it.Now just like the physical maps of our worldthat have been highly influenced by technology --think Google Maps,think GPS --the same thing is happening for brain mappingthrough transformation. So let's take a look at the brain.Most people, when they first look at a fresh human brain,they say, "It doesn't look what you're typically looking atwhen someone shows you a brain."Typically, what you're looking at is a fixed brain. It's gray.And this outer layer, this is the vasculature,which is incredible, around a human brain.This is the blood vessels.20 percent of the oxygencoming from your lungs,20 percent of the blood pumped from your heart,is servicing this one organ.That's basically, if you hold two fists together,it's just slightly larger than the two fists. (Laughter) So what can scientists learn about this data? Now what do those differences look like? Thanks. (Applause)

Sociocultural influences on adolescent boys’ body image and body change strategies Abstract Society provides messages about how people should ideally look and previous research has indicated these messages, both the actual messages provided and the perception of the message, influence body image. Research into male body image has shown males are concerned with having a lean and muscular body and as such, may want to decrease fat and increase their muscles. This paper explored the influence of a range of messages from parents, peers, and the media on a number of different measures of 362 adolescent boys’ body image and body change strategies. Specifically, messages about shape, food, exercise, losing weight and increasing muscles were explored in relation to satisfaction with weight and muscles, and the use of strategies to decrease weight and increase muscles. Keywords Adolescent boys; Sociocultural influences; Body image; Body change strategies Choose an option to locate/access this article:

What ‘Mean Girls’ Taught Us | RELEVANT Magazine Ten years ago, no one had any idea what an iPhone was. Bryan Cranston was still playing a sitcom father on Malcolm in the Middle, and the publishing industry was untouched by deadly teenage dystopias. Few people then could have predicted that a run-of-the mill teen film, focused on three “mean girls,” would explode with cultural impact the way it did. While “fetch” might not have happened, the cult following of Mean Girls definitely did. What is it that makes this film resonate with people enough to have them still quoting lines, a decade later? Everyone Is Terrified of Hearing, “You Can’t Sit With Us.” There were very specific rules to being able to sit with the “Plastics” at lunch. Even long after high school, wanting a place at the table can be a hugely motivating factor in what we choose to wear, do, say or act. We may scoff at the superficiality of what made the Plastics “cool” but that doesn’t mean we haven’t succumbed to other arbitrary rules to fit in. Fitting in is hard.