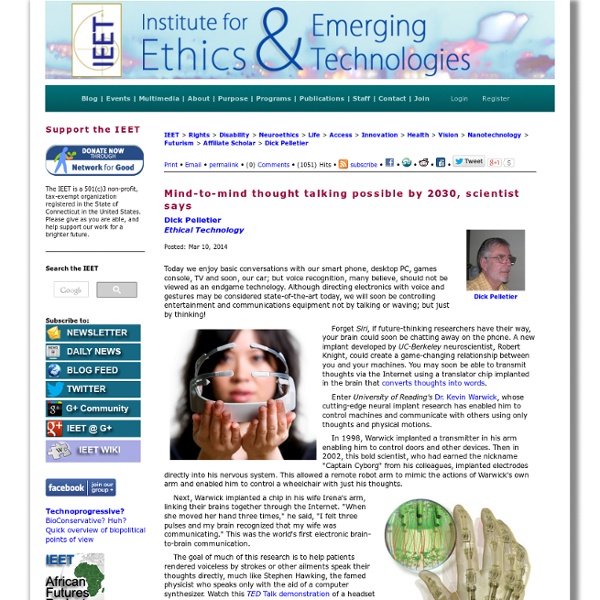 Today we enjoy basic conversations with our smart phone, desktop PC, games console, TV and soon, our car; but voice recognition, many believe, should not be viewed as an endgame technology. Although directing electronics with voice and gestures may be considered state-of-the-art today, we will soon be controlling entertainment and communications equipment not by talking or waving; but just by thinking! Forget Siri, if future-thinking researchers have their way, your brain could soon be chatting away on the phone. A new implant developed by UC-Berkeley neuroscientist, Robert Knight, could create a game-changing relationship between you and your machines. Enter University of Reading's Dr. In 1998, Warwick implanted a transmitter in his arm enabling him to control doors and other devices. Next, Warwick implanted a chip in his wife Irena's arm, linking their brains together through the Internet. Most brain implants consist of a tiny chip with electrodes, combining math and neuroscience. Related:  Brain • Incredible

A New Treatment for Alzheimer's? A drug commonly used to treat arthritis caused a dramatic and rapid improvement in patients with Alzheimer’s disease, according to physicians in California. However, scientists and others not involved in the work worry that the report, which was based on trials in a few patients and hasn’t been independently confirmed, may offer little more than false hope for Alzheimer’s sufferers and their families. Alzheimer’s patients injected with the anti-inflammatory drug etanercept–marketed as Enbrel–showed dramatic improvements in their functioning within minutes, according to Edward Tobinick, director of the Institute for Neurological Research, a private medical facility in Los Angeles where the patients were treated, and an assistant clinical professor of medicine at the University of California, Los Angeles. “The patients improve literally before your eyes,” says Tobinick, who began using etanercept in Alzheimer’s patients three years ago.

Thymus Gland - Anatomy Pictures and Information [Continued from above] . . . It has two distinct but identical lobes that are each surrounded by a tough, fibrous capsule. Within each lobe is a superficial region of tissue called the cortex and a histologically distinct deep region called the medulla. The function of the thymus is to receive immature T cells that are produced in the red bone marrow and train them into functional, mature T cells that attack only foreign cells. Upon reaching the medulla, the surviving T cells continue to mature and are presented with the body’s own antigens. Several hormones produced by the thymus promote the maturation of the T cells prior to their release into the bloodstream. Unlike most organs that grow until the age of maturity, the thymus enlarges throughout childhood but slowly shrinks from the onset of puberty and throughout adulthood. Prepared by Tim Taylor, Anatomy and Physiology Instructor

Brain Images Reveal the Secret to Higher IQ New research suggests that the layer of insulation coating neural wiring in the brain plays a critical role in determining intelligence. In addition, the quality of this insulation appears to be largely genetically determined, providing further support for the idea that IQ is partly inherited. The findings, which result from a detailed study of twins’ brains, hint at how ever-improving brain-imaging technology could shed light on some of our most basic characteristics. “The study answers some very fundamental questions about how the brain expresses intelligence,” says Philip Shaw, a child psychiatrist at the National Institute of Mental Health, in Bethesda, MD, who was not involved in the research. The neural wires that transmit electrical messages from cell to cell in the brain are coated with a fatty layer called myelin. Thompson and his colleagues took DTI scans of 92 pairs of fraternal and identical twins.

First Alzheimer’s Treatment to Fully Restore Memory Functionality As anyone who has seen what Alzheimer’s can do to a person will tell you, it’s not pretty, it’s not fun and it’s one of the most difficult diseases to deal with for both parties. It’s difficult to watch those you love grow older, but when they begin forgetting everything and everyone around them it can be just as damaging to those around them. What makes this disease such a problem is that there have been no significant advances in curing it or reversing its effects since the initial discovery in 1906. The scientists and researchers from the Queensland Brain Institute at the University of Queensland have been working diligently to discover something that would help, and it appears they may have now found a viable treatment. To the best of our current knowledge about Alzheimer’s is that it’s brought on by the buildup of two different types of neural plaques – neurofibrillary clusters and amyloid plaques, both stemming from different proteins.

Miniature Worlds Digitally Assembled from Hundreds of Photographs by Catherine Nelson Sydney-based artist Catherine Nelson refers to herself as a painter with a camera, in that she doesn’t see the world as a photographer does but instead uses photos as a medium with which she creates these fantastic miniature worlds. Each work is comprised of hundreds of photographs which she digitally stitches together, drawing from an extensive background in visual special effects having worked on such films as Moulin Rouge, Harry Potter and 300. Of her work Nelson says: When I embraced the medium of photography, I felt that taking a picture that represented only what was within the frame of the lens wasn’t expressing my personal and inner experience of the world around me. Although the pieces are quite gorgeous to look at right here on Colossal, it’s hard to convey the resolution and scale of each piece which measures about 40×40″ (100x100cm), a level of detail that requires Nelson to spend nearly a month on each piece.

Mind-altering microbes: Probiotic bacteria may lessen anxiety and depression -- ScienceDaily Probiotic bacteria have the potential to alter brain neurochemistry and treat anxiety and depression-related disorders according to research published in the Proceedings of the National Academy of Sciences. The research, carried out by Dr Javier Bravo, and Professor John Cryan at the Alimentary Pharmabiotic Centre in University College Cork, along with collaborators from the Brain-Body Institute at McMaster University in Canada, demonstrated that mice fed with Lactobacillus rhamnosus JB-1 showed significantly fewer stress, anxiety and depression-related behaviours than those fed with just broth. Moreover, ingestion of the bacteria resulted in significantly lower levels of the stress-induced hormone, corticosterone. "This study identifies potential brain targets and a pathway through which certain gut organisms can alter mouse brain chemistry and behaviour.

Facial expression analysis Facial expressions refer to movements of the mimetic musculature of the face. The vast majority of these muscles are innervated by the VIIth cranial nerve, emanating from the brainstem between the pons and medulla (Figure 1). 1 The nerve includes a motor root that supplies somatic muscle fibers to the muscles of the face, scalp, and outer ear, enabling the muscle movements that comprise facial expressions. The sensory part of the nerve enables and augments some aspects of taste and sound (Standring, 2005). (The upper eyelid is innervated by a different nerve – the oculomotor nerve; this muscle is used in expressions of surprise, fear and anger.) The facial nerve receives impulses from multiple brain areas. Once innervated, the face is intricate and differentiated, making it one of the most complex signal systems available to humans. Facial behaviors are used for various functions, including Speech illustration. Emotion Signaling Facial Measurement Suggested Reading Ekman, P. (2003).

Literal Smart Dust Opens Brain-Computer Pathway to “Spy on Your Brain” Source: Activist Post Some might have heard about Smart Dust; nanoparticles that can be employed as sensor networks for a rangeof security and environmental applications. Now, however, literal Smart Dust for the brain is being proposed as the next step toward establishing a brain-computer interface. The system is officially called “neural dust” and works to “monitor the brain from the inside.” Inventors are attempting to overcome the hurdle of how to best implant sensors that can remain over the course of one’s life. This paper explores the fundamental system design trade-offs and ultimate size, power, and bandwidth scaling limits of neural recording systems. A network of tiny implantable sensors could function like an MRI inside the brain, recording data on nearby neurons and transmitting it back out. Concurrently, there is massive long-term investment in nanotech applications via the National Nanotechnology Initiative 2011 Strategic Plan.

Mystery of Prince Rupert's Drop at 130,000 fps About this video How was this done by so small a force? Smarter Every Day heads to a glassblowing workshop in Alabama to reveal the unique mechanical properties of the Prince Rupert's drop – a tadpole-shaped glass structure created by dropping molten glass in cold water. As Destin demonstrates, the very high residual stress within the bulbous end of the drop allows it to withstand a blow from a hammer. Filming in high-speed with a Phantom v1610 the team capture the explosion at100,000 frames per second to reveal, for the first time, exactly how the Prince Rupert drop explodes. But why does this happen? As Destin explains: "If one link in this tension chain is ever cut, it breaks on down the line feeding off of its own stored up energy just like a chemical explosion." Mechanical strain energy is released in a phenomenon known as a "mechanical failure front".