How to make stress your friend [ TED Talk : Kelly McGonigal ] 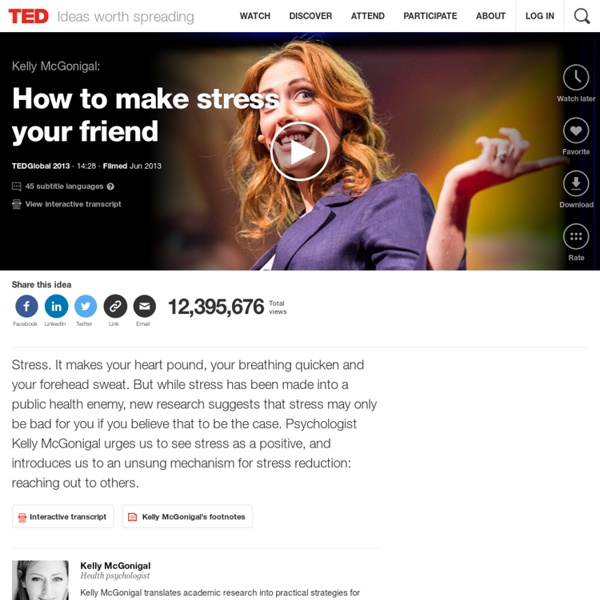 One Research-Backed Way to Effectively Manage Your Stressful and Busy Schedule About twenty years ago, a group of college students at Stanford University headed home for winter break. While they were gone, they were given the task of keeping a daily journal. In this journal, some of the students were asked to write about their most important personal values and then describe how the events of each day connected with those values. Another group of students was simply asked to describe the positive events that happened throughout their day. When the students returned to school after the break, the researchers discovered that those students who wrote about their personal values were healthier, experienced fewer illnesses, and had better energy and attitude than the students who merely wrote about the positive events in their lives. “It turns out that writing about your values is one of the most effective psychological interventions ever studied. But why? The Power of Personal Values Living Out Your Personal Values Each year, I conduct an Integrity Report. P.S.

8 Signs You’re Way Too Stressed Stress. It’s an evolutionary tactic that is great in small doses but is literally killing us now that we’re surrounded by it in our daily existence. Here are eight signs you’re succumbing to its vices. 1. Getting sick once a year is normal. 2. Too much stress leads to too much cortisol which leads to a smaller hippocampus which means you can’t remember your coworkers’ names anymore. Studies also show that this child-like activity melts stress and increases focus. 3. Stress headaches are not the worst headaches of your life. 4. Physically damaging as well, stress causes knots in the back and a stiff neck because of how we tense these muscles when feeling anxious. 5. After a long day of work, it should be no problem falling asleep soon after your head hits the pillow. When all else fails, try Sleep Switch to turn off your mind at night. 6. More common in women than in men, extreme stress can lead to the body’s immune system attacking hair follicles, resulting in hair loss. 7. 8. Read more:

Tend and befriend Tend-and-befriend is a behavior exhibited by some animals, including humans, in response to threat. It refers to protection of offspring (tending) and seeking out the social group for mutual defense (befriending). Tend-and-befriend is theorized as having evolved as the typical female response to stress, just as the primary male response was fight-or-flight. The tend-and-befriend theoretical model was originally developed by Dr. Shelley E. Versus fight-or-flight[edit] The fight-or-flight response has been the dominant model of human (and nonhuman animal) responses to stress. Females and fight-or-flight[edit] Due to higher parental investment in most female mammals, females from these species face the challenge of responding to stressors while protecting offspring.[1] Attacking or fleeing from a predator or threat may interfere with females' ability to protect their offspring. Biological bases[edit] According to the Polyvagal Theory developed by Dr. Tending under stress[edit] See also[edit]

Manage Stress by Listening to Your Body A new study in the journal Biological Psychology suggests that people with better body awareness tend to feel less stressed. That’s no surprise, perhaps, if you’ve already been practicing mindfulness, but may seem odd otherwise. Stress leads to a physiological response, such as increased heart rate or sweating. Participants who reported themselves less overwhelmed by a challenge also noticed their physical state sooner that others—with brain scans suggesting they were able to reign in anxiety before it escalated. This relatively simple idea illustrates a somewhat complex concept around stress management and mindfulness. Start with the Body Mindfulness is meant to be practical, and once again, this study shows why. Left unattended, stress often amplifies itself all day long. Being aware of our bodies helps break the stress cycle. With the body scan, we develop the capacity to notice our physical experience. Adapted from Psychology Today Thanks for subscribing!

The Theory of Cumulative Stress: How to Recover When Stress Builds Up It was my first year of graduate school and my professor was standing at the front of the room. He was telling our class about a mistake he made years before. About a decade earlier, my professor had been one of the senior executives at Sears, Roebuck & Company, the large department store chain. They were in the middle of a massive national campaign and preparing for a major brand launch. My professor was leading the operation. For almost two months prior to the launch day, he was flying all over the country to strike up buzz with major partners and media companies. The week before the big launch day, his body gave out on him. Your Bucket of Health and Energy Imagine that your health and energy are a bucket of water. In your day-to-day life, there are things that fill your bucket up. There are also forces that drain the water from your bucket. The forces that drain your bucket aren’t all negative, of course. These outputs are cumulative. The Theory of Cumulative Stress Why?

9 Ways to Feel Less Stress When Life Gets Crazy Busy Email Don’t stress. Do your very best. Appreciate each step. Forget the rest. Stress is one of the primary causes of major health problems in our lives: it can cause heart disease, anxiety, sleep deprivation, auto-immune disorders, weight problems, unhappiness, and even deep depression. But we’re busy – we all have places to be, things to do and people to see. When life gets crazy busy, you might not have time for week-long meditation and yoga retreats, weekend vacations, or even weekly life coaching sessions. I’m going to be brief about this, because time is of the essence. Reminder: Have you checked out our book? 1. Instead of being in a stressful task-switching state of mind, take your next task, let everything else go, and just be in the moment with this one task. Let yourself be immersed in this task by letting go of the feeling that you need to quickly rush through it – that you need to move on to the next task waiting for you. Bottom line: Slow down. 2. 3. 4. 5. 6. Is it true? 7.

Catastrophe Checklist: The Simple Art of Navigating Stress In the event of decompression, an oxygen mask will automatically appear in front of you. Place it firmly over your nose and mouth, secure the elastic band behind your head, and breathe normally. If you are traveling with a child or someone who requires assistance, secure your mask on first, and then assist the other person. What would you do in an emergency plane landing? I am sure you have heard the word “checklist.” Your first thought may be a grocery list or a to-do list. I first came to the simple power of checklists on a flight to Chicago. When I asked him the question, what would you do in an emergency plane landing, his answer was surprising. A checklist? A pilot does not rely on training or instinct to save passengers in a crash landing. When you are navigating a plane thousands of feet above the ground it is not a matter of what you know, but rather what systems you have in place. That is why checklists are so valuable, for pilots and you. Why Systems Matter Sure. Anger. Go Deeper

Stressed Out? Too Much "I-Talk" Could Be Part of the Problem Source: Valeri Potapova/Shutterstock In 2015, University of Arizona (UA) researchers published a study, "Narcissism and the Use of Personal Pronouns Revisited (link is external)." Their paper concluded that the frequent use of so-called "I-talk" — which refers to using first-person, singular pronouns, such as "I," "me," and "my," when writing or speaking — is not necessarily an indicator of narcissism. A new I-talk study by UA researchers, "Depression, Negative Emotionality, and Self-Referential Language: A Multi-Lab, Multi-Measure, and Multi-Language-Task Research Synthesis (link is external)," was published on March 5 in the Journal of Personality and Social Psychology. The term “negative emotionality” refers to someone having a tendency to become easily distressed or upset. For their I-talk study, Tackman and her UA colleagues partnered with psychologist Matthias Mehl (link is external), director of the University of Arizona Naturalistic Observation of Social Interaction Laboratory.