What You Think You Know About the Web Is Wrong 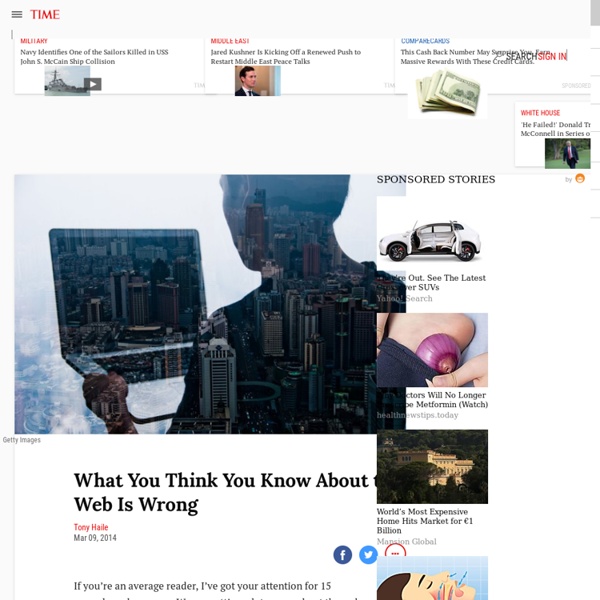 If you’re an average reader, I’ve got your attention for 15 seconds, so here goes: We are getting a lot wrong about the web these days. We confuse what people have clicked on for what they’ve read. We mistake sharing for reading. We race towards new trends like native advertising without fixing what was wrong with the old ones and make the same mistakes all over again. Not an average reader? Maybe you’ll give me more than 15 seconds then. Here’s where we started to go wrong: In 1994, a former direct mail marketer called Ken McCarthy came up with the clickthrough as the measure of ad performance on the web. However, the click had some unfortunate side effects. In 20 years, everything else about the web has been transformed, but the click remains unchanged, we live on the click web. It’s no longer just your clicks they want, it’s your time and attention. The data gets even more interesting when you dig in a little. The most valuable audience is the one that comes back.

Younger adults prefer to get their news in text, not video, according to new data from Pew Research Digital publishers may be pouring time and energy into cranking up their video operations, but for a lot of their potential viewers, text is still the way to go. New data from Pew Research finds that, when it comes to the news, younger adults still prefer words over moving images. While 46 percent of Americans overall say they prefer to watch the news over reading it, that number is far lower for Americans between the ages of 18 and 29 — only 38 percent of that group named video as their preferred news consumption format. In contrast, 42 percent said that they actually prefer text (which they prefer to read online, of course).

more than meets the eye Imagine that you need a refresher on how to tie a tie. So, you decide to type [how to tie a tie] into the Google search box. Which of these results would you choose? Where did your eyes go first when you saw the results page? Did they go directly to the title of the first result? Did you first check the terms in boldface to see if the results really talk about tying a tie? Algorithmic Citizenship Algorithmic Citizenship is a new form of citizenship, one where your citizenship, and therefore both your allegiances and your rights, are constantly being questioned, calculated, and rewritten. Most people are assigned a citizenship at birth, in one of two ways. You may receive your citizenship from the place you're born, which is called jus soli, or the right of soil.

Daily chart: Celebrities’ endorsement earnings on social media HAVING just received a fancy new watch from TAG Heuer, Cristiano Ronaldo, a footballer, posts a photo of himself, wrist aloft, to his Instagram account. He dutifully thanks them for their “kind gift” and signs off the post with the company’s advertising slogan #dontcrackunderpressure. This is the latest frontier of a rapidly growing industry. Since January, more than 200,000 posts per month on Instagram, a picture-sharing app owned by Facebook, have been tagged with “#ad”, “#sp” or “#sponsored”, according to Captiv8, an analytics platform that connects brands to social media “influencers”. Hiring such influencers allows companies to reach a vast network of potential customers: Mr Ronaldo has a combined following of 240m people across Facebook, Instagram and Twitter.

10 Useful Findings About How People View Websites Eyetracking and research have studied how people look at websites. Here are 10 useful findings you can use. 1. Top left corner gets the attention first When users land on your site, their eye path starts from the upper left corner, and moves on from there. According to this eyetracking study these areas get the most attention: Are Wearables the Next News Platform? 'OK Glass, what is the news today?' This sentence might not be mainstream today, but it might be in the future. We asked Robert Hernandez, Associate Professor of Professional Practice at USC Annenberg School for Communication and Journalism and expert in wearables, to tell us more about how news organisations are working with watches and glasses. To know more, join us at the GEN Summit 2015, where he will host a Bootcamp 'Wearables News Beyond the Gadgets'. Which wearables editors-in-chief should keep an eye on?

BuzzFeed CEO Jonah Peretti talks Facebook Live and Ivanka Trump Whether it’s through building a food-porn empire or extending its breaking-news content internationally, BuzzFeed has ambitious global expansion plans. This week, CEO Jonah Peretti was promoting the company in Japan, which he claims is BuzzFeed’s fastest-growing international market. Since launching in January with an 11-person editorial team, BuzzFeed Japan has expanded to over 40 staff. It claims to get over 10 million unique visitors a month. BuzzFeed has 10 international editions. “Even before BuzzFeed tried to be a global company, the internet made us a global company,” he said during a press conference in Tokyo.

Eye tracking study reveals 12 website tactics Eye tracking studies have revealed valuable information about how people read and interact with websites. One study, Eyetrack III, published a summary of their eye tracking results for news sites. While this is just one eye tracking study focused on a particular type of site, I think there are instructive nuggets here for any informational website. In no particular order, here are 12 results I found particularly interesting. 1.Headlines draw eyes before pictures.