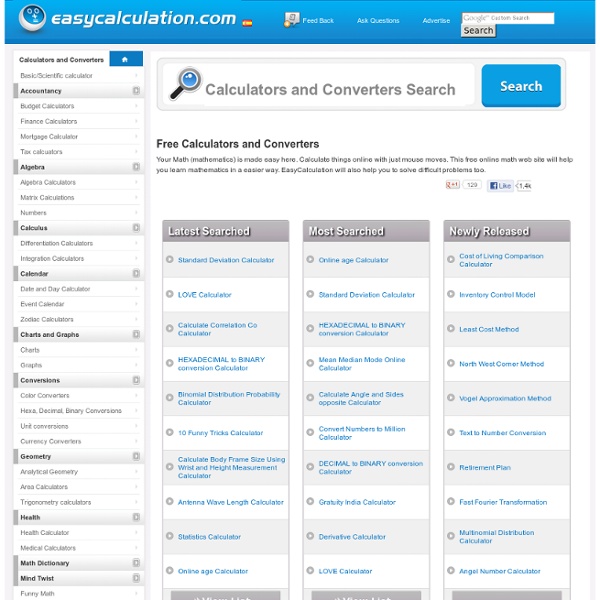 GraphSketch Abbreviations and acronyms dictionary: Find definitions for over 4,219,000 abbreviations, acronyms, and initialisms Flash Earth - Zoom into satellite and aerial imagery of the Earth in Flash 20 Best Websites To Download Free EBooks We understand that reading is the simplest way for human to derive and constructing meaning in order to gain a particular knowledge from a source. This tendency has been digitized when books evolve into digital media equivalent – E-Books. It would be nice if we’re able to download free e-book and take it with us. That’s why we’ve again crawled deep into the Internet to compile this list of 20 places to download free e-books for your use. Great Websites to Download Ebooks FreeBookSpot FreeBookSpot is an online source of free ebooks download with 4485 FREE E-BOOKS in 96 categories which up to 71,97 GB. You can search and download free books in categories like scientific, engineering, programming, fiction and many other books. 4eBooks 4eBooks has a huge collection of computer programming ebooks. Free-eBooks Free-eBooks is an online source for free ebook downloads, ebook resources and ebook authors. You need to become a Free-EBooks.Net member to access their library. ManyBooks GetFreeEBooks Scribd

the free encyclopedia 8 Historic Symbols That Mean The Opposite of What You Think Misunderstood By: Libertarians, Glenn Beck. Glenn Beck has recently found a soul mate in Thomas Paine, the Founding Father known for his Revolutionary War tract Common Sense. So much so that he's gone so far as to rewrite Common Sense for the modern era, essentially stuffing words hand over fist into the mouth of a centuries-dead political philosopher for the soul-shriveling disgust Beck knows Paine would feel about Barack Obama. Libertarians and tea partiers are so enamored by their new ideological BFF that they've taken to dressing up like him on YouTube and spouting off about the evils of taxation, weak foreign policy and too many brown people. But Beck and his minions could probably benefit from actually reading some Thomas Paine. "Pay as a remission of taxes to every poor family, out of the surplus taxes, and in room of poor-rates, four pounds a year for every child under fourteen years of age." An entitlement paying old people to support them for not working?