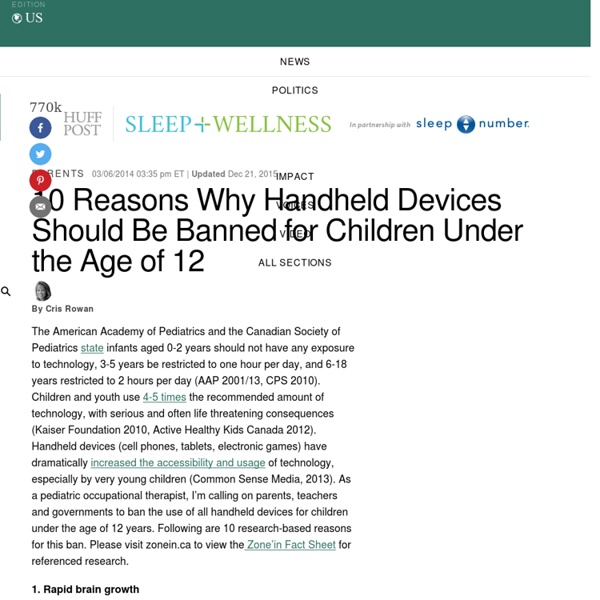 The American Academy of Pediatrics and the Canadian Society of Pediatrics state infants aged 0-2 years should not have any exposure to technology, 3-5 years be restricted to one hour per day, and 6-18 years restricted to 2 hours per day (AAP 2001/13, CPS 2010). Children and youth use 4-5 times the recommended amount of technology, with serious and often life threatening consequences (Kaiser Foundation 2010, Active Healthy Kids Canada 2012). Handheld devices (cell phones, tablets, electronic games) have dramatically increased the accessibility and usage of technology, especially by very young children (Common Sense Media, 2013). As a pediatric occupational therapist, I’m calling on parents, teachers and governments to ban the use of all handheld devices for children under the age of 12 years. Following are 10 research-based reasons for this ban. Please visit zonein.ca to view the Zone’in Fact Sheet for referenced research. 1. 2. 3. 4. 5. 6. 7. 8. 9. 10.

Screen Time Isn't Always Bad for Kids Most parents know the importance of reading to their children. Building a collection of baby books is one activity many parents enjoy doing when they first learn they are expecting. My 1-year-old son already has a large collection of books. From classics like Corduroy to bilingual books like La Oruga Muy Hambrienta / The Very Hungry Caterpillar. The significance of reading to kids, especially infants, was underscored recently when the American Academy of Pediatrics (AAP) released a new policy statement recommending pediatric providers promote reading to children from infancy until at least kindergarten. The policy advises that parents should be encouraged to read aloud to their young children as it can enhance parent-child relationships and help kids learn language and early literacy skills.

8 Things Everybody Ought to Know About Concentrating “Music helps me concentrate,” Mike said to me glancing briefly over his shoulder. Mike was in his room writing a paper for his U.S. History class. 10 Points Where the Research Behind Banning Handheld Devices for Children Is Flawed  You may have come across Cris Rowan's popular HuffPost piece explaining 10 reasons handheld devices should be banned for children under 12. You may also have read the rebuttal from a librarian mom who explains why she will continue to give her children handheld devices. While the pro-device author explains the benefits of handhelds, what she doesn't uncover is that the research cited by the original author doesn't support her claims. In fact, the research cited in the Rowan piece is so unsupportive of her claims, it seems possible that the real motive behind the article was to test the reader's gullibility. If readers had dug a little deeper, they'd find the truth. The research focuses mainly on passive television consumption and video games that are either simple or for mature audiences.

AAPNEWS : AAP News Copyright © 2015 by the American Academy of Pediatrics Authors When families seek our professional advice on managing technology in their children’s lives, we turn to research-based AAP guidelines that promote positive media use and discourage potentially harmful use. Pentagon researching ‘narrative networks’ as way to hijack the brain with false stories J. D. HeyesNaturalNews If someone – or some government entity – were able to figure out the science behind what makes people violent, what do you suppose they would do with that knowledge?

Making digital butterflies from old phones Is This Good? is a collective of digital creative artists, who devote their time to building weird and wonderful electronic contraptions. They have an abundance of technical and coding skills between them and work with circuit boards, Raspberry Pi computers, capacitors and soldering kits. But they also like to use the digital litter that people leave behind, like smart phones, Bluetooth sets and SIM cards. They first made birds from mobile phone scrap on a whim, which were later exhibited at the Victoria & Albert Museum. They were subsequently commissioned by O2 Recycle to make interactive butterflies, to raise awareness about mobile phone waste.

How Your Brain Works" Every animal you can think of -- mammals, birds, reptiles, fish, amphibians -- has a brain. But the human brain is unique. Although it's not the largest, it gives us the power to speak, imagine and problem solve. It is truly an amazing organ. The brain performs an incredible number of tasks including the following: It controls body temperature, blood pressure, heart rate and breathing.It accepts a flood of information about the world around you from your various senses (seeing, hearing, smelling, tasting and touching).It handles your physical movement when walking, talking, standing or sitting.It lets you think, dream, reason and experience emotions.

How Long to Nap for the Best Brain Benefits Home » Health » How Long to Nap for the Best Brain Benefits Taking a nap, we’ve seen time and again, is like rebooting your brain. But napping may be as much of an art as it is a science. Scientists offer recommendations for planning your perfect nap, including how long to nap and when. The sleep experts in the article say a 10-to-20-minute power nap gives you the best “bang for your buck,” but depending on what you want the nap to do for you, other durations might be ideal: For a quick boost of alertness, experts say a 10-to-20-minute power nap is adequate for getting back to work in a pinch. For cognitive memory processing, however, a 60-minute nap may do more good, Dr.

Will a robot take your job? - BBC News Type your job title into the search box below to find out the likelihood that it could be automated within the next two decades. About 35% of current jobs in the UK are at high risk of computerisation over the following 20 years, according to a study by researchers at Oxford University and Deloitte. Tap here for the interactive. Sources 'The Future of Employment: How susceptible are jobs to automation'. Data supplied by Michael Osborne and Carl Frey, from Oxford University's Martin School.

Kids And Screen Time: What Does The Research Say? : NPR Ed Kids are spending more time than ever in front of screens, and it may be inhibiting their ability to recognize emotions, according to new research out of the University of California, Los Angeles. The study, published in the journal Computers in Human Behavior, found that sixth-graders who went five days without exposure to technology were significantly better at reading human emotions than kids who had regular access to phones, televisions and computers. The UCLA researchers studied two groups of sixth-graders from a Southern California public school. One group was sent to the Pali Institute, an outdoor education camp in Running Springs, Calif., where the kids had no access to electronic devices. For the other group, it was life as usual. At the beginning and end of the five-day study period, both groups of kids were shown images of nearly 50 faces and asked to identify the feelings being modeled.

Me, My Selfie and I See also: 7 Tips For Great Selfies It's official: 2013 is the year that the selfie came into its own. The self-taken mobile photo now boasts its own art exhibition as well as a new linguistic status—Oxford Dictionaries just added the word in August, making it a legitimate part of the English language. (Update: Oxford has made named it the word of the year for 2013.) Selfies are already big enough to spark a backlash, about which more in a moment. Study Finds Gamers Have Greater Cognitive Function And More Grey Matter Gamers everywhere rejoice! It turns out that gaming prowess is an indication of a better connected brain. This latest conclusion was drawn from research which looked at the cognitive function of Action Video Gamers (AVGs) of different levels of proficiency.