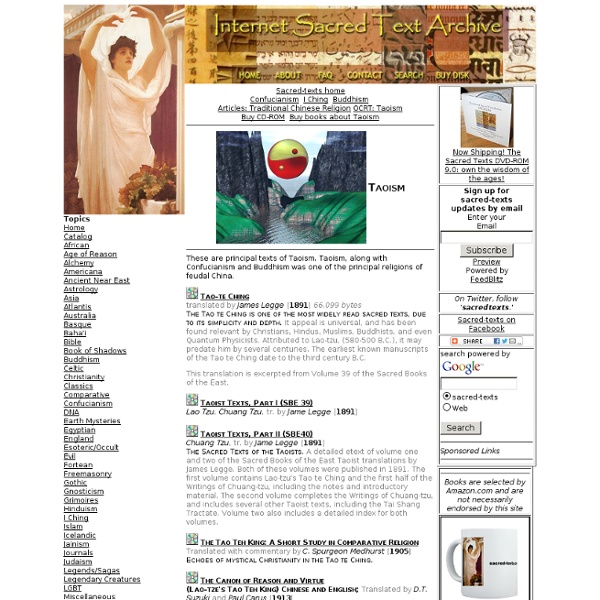 The Path of Water - 21st century Taoism Welcome to the Akashic Library ARC - Faiths and ecology - What does Daoism teach us about ecology? Four main principles of Daoism guide the relationship between humanity and nature: 1. Follow the Earth The Dao De Jing says: 'Humanity follows the Earth, the Earth follows Heaven, Heaven follows the Dao, and the Dao follows what is natural.' Daoists therefore obey the Earth. 2. In Daoism, everything is composed of two opposite forces known as Yin and Yang. 3. If the pursuit of development runs counter to the harmony and balance of nature, even if it is of great immediate interest and profit, people should restrain themselves from it. 4. Daoism has a unique sense of value in that it judges affluence by the number of different species.

The Useless Tree Blavatsky Study Center:  Website on H.P. Blavatsky & Theosophy including Blavatsky Archives. TAOISM Major world religions Menu Sponsored link. The Taoist Yin Yang symbol: Overview: Taoism is an Eastern religion/philosophy with perhaps 225 million followers. The exact number of followers is impossible to estimate because many of its followers also identify with other religions -- often Buddhism and Confucianism -- and because it is impossible to obtain reliable polling information from individuals in China. Taoists were heavily persecuted in China for years after the Communist victory in 1949, and during the cultural revolution from 1966 to 1976. Topics discussed in this section: Site navigation: Copyright © 1995 to 2011 by Ontario Consultants on Religious Tolerance Original publishing date: 1995-JUN-3 (That is not an error; we really have been online since the infancy of the Internet.) Sponsored link

Dao De Jing Daripada Wikibooks. 31 Weapons are the bearers of bad news; all people should detest them. The wise man values the left side, and in time of war he values the right. Weapons are meant for destruction, and thus are avoided by the wise. Only as a last resort will a wise person use a deadly weapon. 32 The Tao is nameless and unchanging. If a ruler abides by its principles, then her people will willingly follow. Naming is a necessity for order, but naming can not order all things. All things end in the Tao just as the small streams and the largest rivers flow through valleys to the sea. 33 Those who know others are intelligent; those who know themselves are truly wise. Those who know they have enough are truly wealthy. Those who persist will reach their goal. Those who keep their course have a strong will. 34 The great Tao flows unobstructed in every direction. 35 She who follows the way of the Tao will draw the world to her steps. The soft and pliable overcomes the hard and inflexible.

The Rotation of the Elements (c) 1995, John Opsopaus When thou hast made the quadrangle round, Then is all the secret found. -- George Ripley (d. 1490) The rotation of the elements is a key alchemical procedure, the principal means by which the purified essence of a substance is extracted and raised to its most sublime state. Indeed, the rotation symbolizes an important transformative process, which manifests throughout the spiritual and material worlds, but to understand it we must review the symbolic structure of the four elements. The elements have been rich symbols for at least 2500 years, for they resonate with our deepest experience of the world. Now hear the fourfold roots of everything: Enlivening Hera, Hades, shining Zeus And Nestis, moistening mortal springs with tears. Hera rules the fruitful earth, Hades the central fire, Zeus the luminescent air, and Nestis the mollifying water The rotation of the elements depends on two interrelated structures, one linear and the other cyclic. Square of Opposition Phanes

Taoism - Credo Reference - Credo Reference Summary Article: Taoism from The Hutchinson Unabridged Encyclopedia with Atlas and Weather Guide Chinese philosophical system, traditionally founded by the Chinese philosopher Lao Zi in the 6th century BC. He is also attributed authorship of the scriptures, Tao Te Ching, although these were apparently compiled in the 3rd century BC. The ‘tao’ or ‘way’ denotes the hidden principle of the universe, and less stress is laid on good deeds than on harmonious interaction with the environment, which automatically ensures right behaviour. The magical side of Taoism is illustrated by the I Ching or Book of Changes, a book of divination. Beliefs The universe is believed to be kept in balance by the opposing forces of yin and yang that operate in dynamic tension between themselves. Continue Reading RM, 2014. Taoism. (2014). Every effort has been made to have our citations be as accurate as possible, but please check our work!

Hearth and Home Witchery Imbolg Crafts and Activities for Children There are so many activities to do with your young ones at Oimelc, many of which can also be done at the Spring Equinox. Older children can help make candles (there are lots of kits out there to make it easier) and candle holders. Younger children can make "candles" from toilet paper rolls and construction paper. If you choose to start your Spring Cleaning, a small brush broom and dustpan, a clean cloth to help wipe down cabinet doors or dust tables or child size cleaning equipment for those little "can I help?" Make a Priapic Wand ~Reading~ Meagan's Imbolc by Kathryn Dyer The Story of Imbolc by Rachel Walker Making Butter In a clean jar with a screw on top pour in heavy or whipping cream. Paper Brigid's Crown An Imbolc Project By Wendy Sheridan (This is especially appropriate for young girls, since this is the holiday for the return of the maiden). You will need: Cut a strip of paper about 2 inches wide and long enough to wrap around your child's head.

Explanation of the Esoteric Pentagram Explanation of the Esoteric Pentagram Details Written by Gnostic Instructor "The pentagram expresses the dominion of the Spirit over the elements of Nature. We can command the elemental creatures that inhabit the regions of fire, air, water, and earth with this magical sign." Get posters and stickers of the pentagram. The five Impressions of the Great Light are found represented within the esoteric pentagram. The Gnostic pentagram is the human figure with four limbs, and one unique apex which is the head. The sign of the pentagram is also called the sign of the Microcosm. When the superior point of the pentagram is pointing up, it represents the Savior of the world. When the two inferior points of the pentagram are pointing up, it represents the male goat of the Witches’ Sabbath. A human figure with the head pointing down obviously represents a demon, that is to say, an intellectual subversion, disorder, or madness. The comprehension of the magic pentagram is the key of the two Spaces. Conclusion

Outstanding Article on The Healing of Crystals!!! HJ: The minerals that makeup crystals are literally stardust transformed over timescales unimaginable to the human mind. As such, they have some pretty remarkable healing properties. There are literally thousands of different varieties, each with their own effects and unique makeup. Judy Hall is one of the world’s foremost experts on crystals and presents a wonderfully detailed and complete guide below how to use them for healing your mind, body and spirit. - Truth THE FRUITS OF THE EARTH: An introduction to crystal healing Excerpted from Earth Blessings: Using Crystals for Personal Energy Clearing, Earth Healing & Environmental Enhancement by Judy Hall, a past-life therapist and karmic astrologer with more than 40 years of experience. Crystals and the rocks that enfold them are reborn star matter, created and recreated by a variety of processes, each of which affects how energy is able to flow. Igneous rocks Many potent healing crystals are a result of igneous processes. Sedimentary rocks