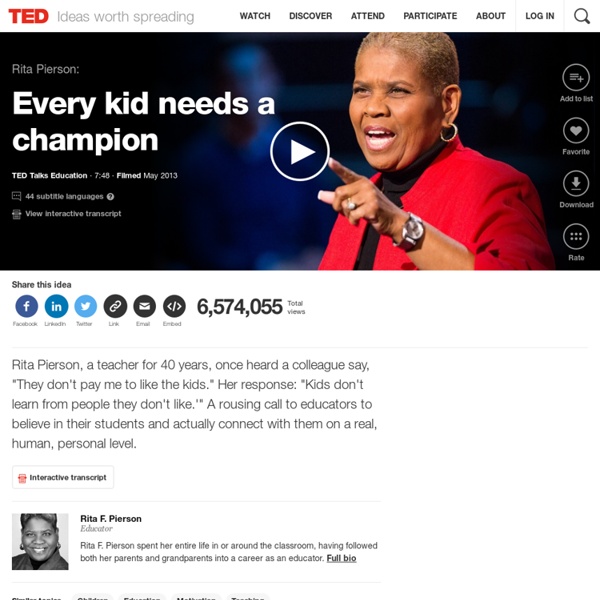 Rita Pierson: Every kid needs a champion Rita Pierson, a teacher for 40 years, once heard a colleague say, "They don't pay me to like the kids." Her response: "Kids don't learn from people they don’t like.’” A rousing call to educators to believe in their students and actually connect with them on a real, human, personal level. This talk was presented at an official TED conference, and was featured by our editors on the home page.

Netflix - Watch TV Shows Online, Watch Movies Online 5 Reasons To Write A Letter To Your Future Self In March, I turned twenty-five years old, and on that most dreaded day I received a letter from my twelve year-old-self. At twelve, I distinctly remember listening to Britney Spears’ “Ooops I did it Again,” consuming Fruit by the Foot, surviving Y2K, and wearing checkered school jumpers that came down to my knees. It was that magical time right before pimples started growing uncontrollably and watching Saturday morning cartoons was still acceptable. Oh how much has changed since those simple times. Reading my letter evoked a lot of emotions in the span of two minutes. It was hilarious that I questioned my own ability to achieve higher education, or better yet, to even have higher education as my main concern at the age of twelve.

Your Words Matter Your Words Matter. I had a teacher who once told me I would most likely be a college dropout. Her words mattered. What it’s like to grow old, in different parts of the world At TED2013, Jared Diamond shares some of his research on how different societies treat the elderly. Photo: James Duncan Davidson The world’s population is getting older. Across the globe, people are living longer thanks to improvements in healthcare, nutrition and technology. This population shift brings with it incredible possibilities, but also a new set of challenges. Make Your Life into a Masterpiece Make Your Life into a Masterpiece The most important masterpiece you’ll ever create is your life. But to create your masterpiece you must first design it. 4 inspiring kids imagine the future of learning After more than 13 years of research convinced him that children have the ability to learn almost anything on their own, 2013 TED Prize winner Sugata Mitra aspires to shape the future of learning by building a School in the Cloud, helping kids “tap into their innate sense of wonder.” In the spirit of Mitra’s invitation to the world to “ask kids big questions, and find big answers,” we asked four brilliant young people to tell us: What do you think is the future of learning? Here, their answers. Adora Svitak, 15-year-old writer, teacher and activist “One of the most powerful shifts in the future of education will come from not only the tools at our disposal, but from an underutilized resource: the students whose voices have for too long been silent.

E + R = O and possibly 14-0 The biggest development during Ohio State’s first game week has nothing to do with the opponent or even national championship hopes. It’s actually something that doesn’t relate to on-field play at all. Leadership. Luke Fickell called it a buzzword. But it’s a real life truth. LIAM 108 - Self-Talk Determines Success! Your self-talk is the largest determining factor for your success in any area of life! How you talk to yourself is a reflection of your beliefs about yourself and influences your behaviors. Are you judgmental, harsh, critical, self-deprecating? or are you accepting, loving, kind, supportive, encouraging? Most of us would not have any friends if we talked to them the way we talk to ourselves! Listen as I explain more: