Asciinema - Record and share your terminal sessions, the right way 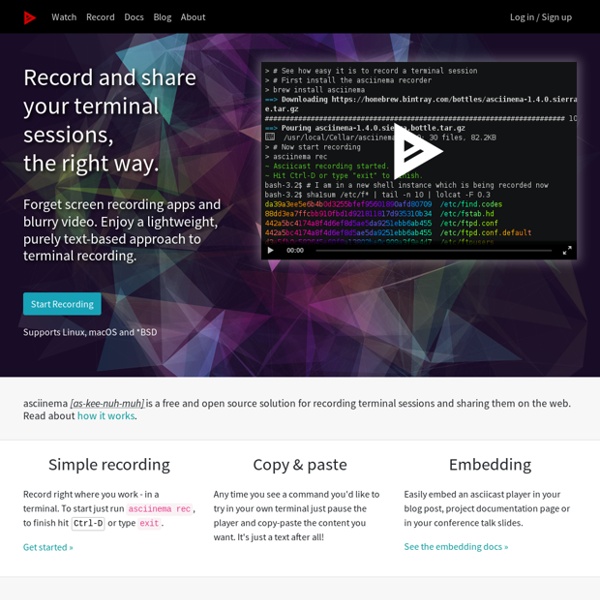 Alfred 4 Is Here! It's here! It's really here! After months of intense development and testing, we're delighted to say that Alfred 4 is here. Our wonderful beta testers have put Alfred 4 through its paces over the past few months, and we have a solid release available for you even before our original target of June! Quick Start (Windows) Go to the React Native Getting Started guide, switch to the Building Projects with Native Code tab and follow the steps in the first two sections under Installing Dependencies (Node, Python2, JDK and The React Native CLI). Note: you do not need Android Studio/Xcode to use the testbed application. Open Powershell and navigate to where you want to create the ViroReact project and run the command This will create a React Native project in the ViroSample directory. Run the following commands in Powershell

Guide to Windows 10 Task Manager – Part II In Part I of this series, we talked about how to open the task manager and went over the Processes, Details and Services tab. In this second part, we’re going to go over the Performance and App History tabs. In Part III, we’ll talk about the Startup and Users tabs. The Performance tab is probably my favorite in the task manager. It lets you see in real-time how taxed your various components are. At the top is the CPU, which will be the default selection when you click on the tab. psioniq File Header :: Table of Contents :: The psioniq File Header VSCode Extension will insert a header into the current document - either at the start of the document or at the current cursor position. The header can be configured globally and/or per language.

Download Shell Enhancements Tools for Windows - MajorGeeks Customize the appearance of the 7-Zip file archiver with multiple toolbar and filetype themes. 8GadgetPack 30.0 [ 2019-10-10 | 25.5 MB | Freeware | Win 10 / 8 / 7 | 11367 | 5 ] 8GadgetPack brings gadgets back to your Windows 10, 8.1 and 7. Accent Color Synchronizer is a portable tool that gives you the option to harmonize accent colors with their traditional desktop programs in Windows 10.

How To Run Windows Software on Ubuntu with Wine Linux is a great operating system, but its software catalog can be lacking. If there’s a Windows game or other app you just can’t do without, you can use Wine to run it right on your Ubuntu desktop. Wine is a work in progress, so it won’t run every application perfectly — in fact, some applications may not run at all — but it’s improving all the time. This beginner’s guide will get you up and running with Wine.

Cross-cutting concern For instance, if writing an application for handling medical records, the indexing of such records is a core concern, while logging a history of changes to the record database or user database, or an authentication system, would be cross-cutting concerns since they interact with more parts of the program. Background[edit] Examples[edit] Examples of concerns that tend to be cross-cutting include: See also[edit] References[edit]

GSL - GNU Scientific Library Introduction The GNU Scientific Library (GSL) is a numerical library for C and C++ programmers. It is free software under the GNU General Public License. State Diagram syntax and features State diagrams are used to give an abstract description of the behavior of a system. This behavior is represented as a series of events that can occur in one or more possible states. Simple State You can use [*] for the starting point and ending point of the state diagram. Use --> for arrows. Modific Modific is a ST2(3) plugin for highlighting lines changed since the last commit (you know what I mean if you used Netbeans). For now it supports Git, SVN, Bazaar, Mercurial and TFS. Install The easiest way to install is through Package Control.