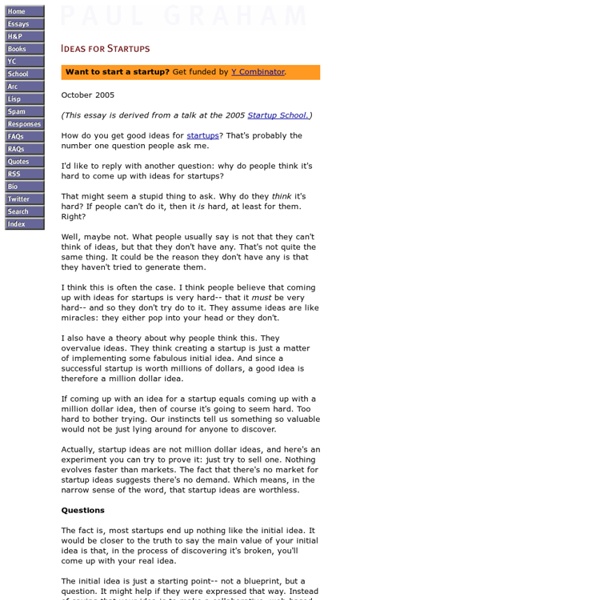 October 2005 (This essay is derived from a talk at the 2005 Startup School.) How do you get good ideas for startups? That's probably the number one question people ask me. I'd like to reply with another question: why do people think it's hard to come up with ideas for startups? That might seem a stupid thing to ask. Well, maybe not. I think this is often the case. I also have a theory about why people think this. If coming up with an idea for a startup equals coming up with a million dollar idea, then of course it's going to seem hard. Actually, startup ideas are not million dollar ideas, and here's an experiment you can try to prove it: just try to sell one. Questions The fact is, most startups end up nothing like the initial idea. The initial idea is just a starting point-- not a blueprint, but a question. There's a real difference, because an assertion provokes objections in a way a question doesn't. A question doesn't seem so challenging. Upwind Doodling What happens in that shower? Notes Related:  Ideas & Negocios

how I saved $100 million on the web Young Entrepreneur - Small Business & Entrepreneur Community Skip Advertisement This ad will close in 15 seconds... Young Entrepreneurs Today's Most Read 9 Proven Ways to Get People to Take You Seriously 4 Intangibles That Drive CEOs What It Takes to Go From Dead Broke to 6 Figures in 6 Months The Mentality of a Successful Career 4 Big Challenges That Startups Face These Siblings Are Cooking Up America's First Meatless Butcher Shop Kim Lachance Shandrow 3 min read News and Articles About Young Entrepreneurs Failure 6 Stories of Super Successes Who Overcame Failure They're perfect examples of why failure should never stop you from following your vision. Jayson DeMers Podcasts Top 25 Business Podcasts for Entrepreneurs Podcasts are as easy to use as old-school radio but as specialized as blogs. Murray Newlands Entrepreneurship Programs Saxbys and Drexel Team Up to Promote Entrepreneurship Saxby's founder Nick Bayer talks about the one-of-a-kind program and why he wishes there was one for himself years ago. Carly Okyle Presented by Young Entrepreneurs Laura Entis Fear

Global Guerrillas: RC JOURNAL: Entrepreneurship as Resilience One of the best ways you can prepare for the future is to train yourself to become an entrepreneur -- essentially a person that makes their own economic opportunities. It's going to become a major differentiator between those that succeed and those that fail in a harsh global system (this expertise has been deprecated by a system that prides itself on manufacturing salaried consumption bots). So, as your salary melts away, your pension evaporates, or your job gets outsourced -- here's a quick guide on how to bootstrap the process: Learn how to sell. * It's my belief that that the potential for the success of a resilient community will be a function of the quality and number of its entrepreneurs.

How to Start a Business without Money Several decades ago, before I got interested in starting businesses, I met a friend who went from being penniless to becoming quite wealthy in a breathtakingly short amount of time. I asked him what the secret of getting rich was. He said that you should find something that interests you and become an expert. For some reason, he became interested in turquoise and went from knowing nothing to becoming quite knowledgeable about the gem, the various sources, the market, and the players. When I started my first business, which was an ice cream company, I had no money, I had no business experience, and I had absolutely no idea how to make ice cream. What drove the growth of my business was the growth of my knowledge of ice cream. When you start a business, what must lead the way should be your own interest in or love for whatever it is you want to do. Besides, money is overrated. But I am also a practical man who like fast-growing businesses. www.lazyway.net

5 Clever Ways To Keep Your Muse On Speed Dial Chief Editor’s Note: This is a guest post from Dave Navarro known for his blog that rocks: Rock Your Day Feeling stuck? There’s nothing more intimidating than staring at a blank page (or screen) and realizing that you’re up against a solid case of writer’s block. Tip #1 – Keep A Tangent Journal As You Write Just as conversations often branch off into unrelated tangents, whatever you’re writing about now can be the catalyst for many other things you may write about later. Tip #2 – Write, Then Brainstorm After you’ve successfully hammered out your quota of words for the day, don’t let all that mental momentum go to waste. Tip #3 – Find Someone To Give You A Jump-Start Sometimes you’ll find yourself absolutely brain-locked, unable to even begin thinking about what to write. Tip #4 – Condition Yourself For Creativity Tip #5 – Show Up On Time, Every Time Your Turn: Tell Us Your Top Writing Productivity Tip Looking for more tips to make your life easier?

5 ways to start a company (without quitting your day job) - May Almost everyone stuck in a cubicle dreams of starting his own business. Here are 5 ways to use your current gig to launch a new venture. (Business 2.0 Magazine) - If you're reading this, there's a good chance that you've always wanted to launch your own startup. According to our research, roughly half of all Business 2.0 readers dream of founding their own companies. Odds are, however, that you're still working for someone else. Maybe it's because you're afraid to give up that steady paycheck. So we set out to see if we could help. Still, working for a corporation affords access to several things that are vital to a fledgling company: money, customers, market research, personnel. All of them, however, learned to look at salaried life as a springboard rather than a prison. Here are five ways to get started. 1. Gregory Moore financed his big idea one paycheck at a time. The Monday after he left TeraHealth in March 2001, his new company, Harbor Healthcare, was open for business. 2. 3. 4. 5.

Why Local Sucks. Or Maybe Not. - kazabyte Chris Devore, a long-time friend, writes an interesting blog post on why you shouldn't do a startup in the local space. Or why it was a bad idea a few years back. I've exchanged a few comments on facebook with him and Andy in a friendly spar. Ben Smith weighs in and so does Jason Culverhouse with a comment on Chris' blog. In short, local sucks if you are an Internet entrepreneur. And yet, there have been a few big successes (OpenTable and Groupon), a few moderate ones (Topix, urbanspoon, and MerchantCircle -- a company I co-founded), and a few that I'm pretty sure are (going to be) hits. My conclusion: There was and still is money at the end of the local road. Merchants First. Scale Free Customer Acquisition. Hit the Hinterlands. Go Lean. Conclusion Many of our assumptions were the same as Judy's Book. And what about MerchantCircle in the end?

This I Believe! - Tom Peter&#039;s 60 TIBs <A HREF=" Widgets</A> Issue 2 | This I Believe! - Tom's 60 TIBs By Tom PetersPublished Aug. 25, 2004 1:22 a.m. Tom Peters is back with more Big Ideas for your job, your company, and your life. The marketing and strategy guru holds forth on why audacity matters, why women are the future of leadership, and why diversity is crucial to business success. Download About Tom Peters | Fortune calls Tom Peters the Ur-guru of management and compares him to Ralph Waldo Emerson, Henry David Thoreau, Walt Whitman and H.L. www.tompeters.com View 7 other manifestos by this author Request Processed 97 Failures Is the Key to Success. - kazabyte As noted in a few blog posts, when Ben and I co-founded MerchantCircle, we were met head on with skepticism...."You know nothing about media and local...or the Internet."... "Look at all the dead bodies pursuing the holy grail of getting to small businesses. How could you possibly succeed?"..." All of this was true. We knew we could build a machine to figure it out. Hopes and Dreams Failure. Figuring out how to acquire merchants as customer at low cost and scale was a key concern. And, it didn't. New Big Idea. So we brainstormed over other ways to get customers. Fortunately, this worked out in the long run. Crazy Ideas. Because SEO is a long game with risk, we started to think about other ideas. We probably cycled through 500 ideas. 100 Experiments. 97 Failures. 3 Successes. We then formulated some hypotheses. Our goal was to find 3 approaches that worked. Regardless, when we saw a glimmer of hope of an experiment with a good result, we ran with it. 3 Successes? Retrospective

Web Work 101: 10 Apps You Can’t Do Without – WebWorkerDaily So you’ve been downsized. Or you’ve bailed before being booted because you saw the writing on the wall. Or maybe you skipped the steady paycheck for a go at being a freelancer. Whatever the reason you’re out there on your own now, we’ve compiled a list of apps you’ll need to run your web-working business. This is by no means a comprehensive list, just a sampling of the apps and solutions that we’ve blogged about in the past. Here’s what the new web worker needs to get the job done well: Backoffice 1. I can’t run my business without my Freshbooks, but there are many options out there for freelancers to manage invoices and track income and expenses. You can also track expenses with these apps: 2. While Freshbooks does have time tracking, I must confess I’m remiss with tracking my time with a tracker (and yes, even with my cute Freshbooks time tracking widget for Mac OSX). I have to admit I’m the first to ignore anything that has an acronym. 4. ReadItLater, Instapaper, LaterLoop Communications

How to Win With Google AdWords Most businesses want a cost-effective way to bring in more customers. The challenge is to find prospects who are thinking about your products at the exact time that you reach them. With the advent of Google AdWords, it’s possible to target prospects at the very moment they’re thinking about buying your products or services. If someone runs a Google search on digital cameras, they only see ads for digital cameras. Read on to learn how to maximize your success with Google AdWords. What is Google AdWords? Open up a Web browser and go to the Google website. As participants in what is actually automated auction, each of these advertisers (or Sponsors) is bidding for the keyword "coffee". Find your Niche Often, many companies compete for popular keywords (e.g., coffee). Our coffee roaster would probably want to try the keyword coffee, and watch it like a hawk as it could result in many low quality clicks (not many conversions to leads or sales). Getting Started Sign Up for Google AdWords Your Bid

How to Start a Startup March 2005 (This essay is derived from a talk at the Harvard Computer Society.) You need three things to create a successful startup: to start with good people, to make something customers actually want, and to spend as little money as possible. Most startups that fail do it because they fail at one of these. A startup that does all three will probably succeed. And that's kind of exciting, when you think about it, because all three are doable. If there is one message I'd like to get across about startups, that's it. The Idea In particular, you don't need a brilliant idea to start a startup around. Google's plan, for example, was simply to create a search site that didn't suck. There are plenty of other areas that are just as backward as search was before Google. For example, dating sites currently suck far worse than search did before Google. An idea for a startup, however, is only a beginning. What matters is not ideas, but the people who have them. People What do I mean by good people?