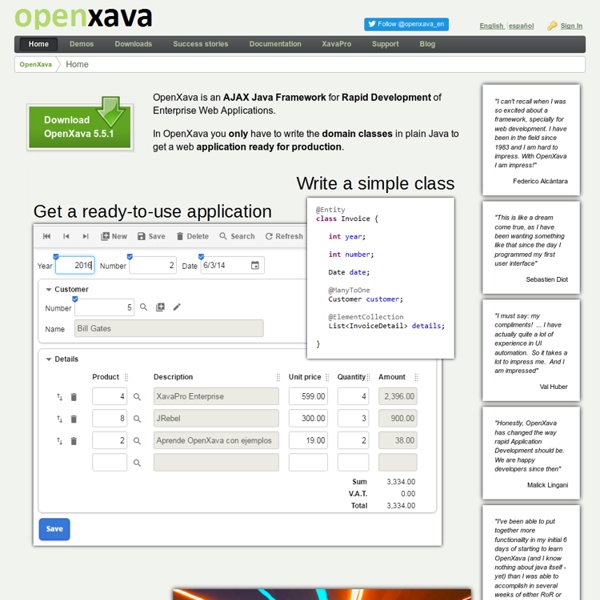 OpenXava 4.0: Rapid Java Web Development OpenXava is a framework for rapid development of business applications using Java. It is easy to learn and one can have an application up in no time. At the same time, OpenXava is extensible, customizable and the application code is structured in a very pure object oriented way, allowing you to develop arbitrarily complex applications. The OpenXava approach for rapid development differs from those that use visual environments (like Visual Basic or Delphi) or scripting (like PHP). The all-new version of OpenXava, OpenXava 4.0, improves significantly the user experience, producing a Rich Internet Application user interface. The best way to taste the new features of OpenXava 4.0 is downloading it and following the Quick Start guide. Better User Experience The next screenshot of a simple OpenXava 4.0 module shows some of the new features: Another new useful feature of OpenXava is the use of dialogs. These are only some of the user interface new features. More Options for Developers 01. 02. 03.

Documentation - OpenXava Database reverse engineering with Minute project and OpenXava The goal of this article is to have a working Openxava on top of a data model by writting 0 (yes ZERO) lines of code. This application has to run as a standalone webapp or as portlets in a portal. The model used is... Be Standard, be Free: Use JSR-303 for Validation No matter what type of application we develop, coding validations is our everyday task. JavaHispano Podcast - 101 - OpenXava 4.0 (Entrevista a Javier Paniza) Publicado un nuevo número del podcast de javaHispano. How to simplify MDD for speeding Java Enterprise Development? A notable problem of Java Enterprise Development is its inherent complexity. Interview: Javier Paniza on OpenXava and Open Source Are you familiar with OpenXava? Automatic User Interface with OpenXava: An Evolutionary Option for GUIs A Productivity Race: Ruby on Rails vs JPA on OX3 This article tries to demonstrate that Java can be more productive than Ruby. Interview with Javier Paniza on OpenXava 2.1

Free Java Web App Framework OpenXava Updated -- ADTmag News Free Java Web App Framework OpenXava Updated The open source OpenXava project, which recently announced its 4.8 release, is filling a niche among enterprise developers charged with building Web apps fast. Built in Java, the OpenXava framework is a cross-platform enterprise Web application framework available at no cost under a GNU Lesser General Public License. It's essentially a business component framework designed to allow developers to define all information about a business concept in a single place. Business components comprise all software artifacts necessary to define a business concept. Javier Paniza, the project lead for the OpenXava project, works as software developer at Gestión 400, a software company for public administration in Spain. The 4.8 release adds a number of new features and enhancements, including the ability to group several actions (nested actions) and show them in a drop-down menu activated in the button bar.