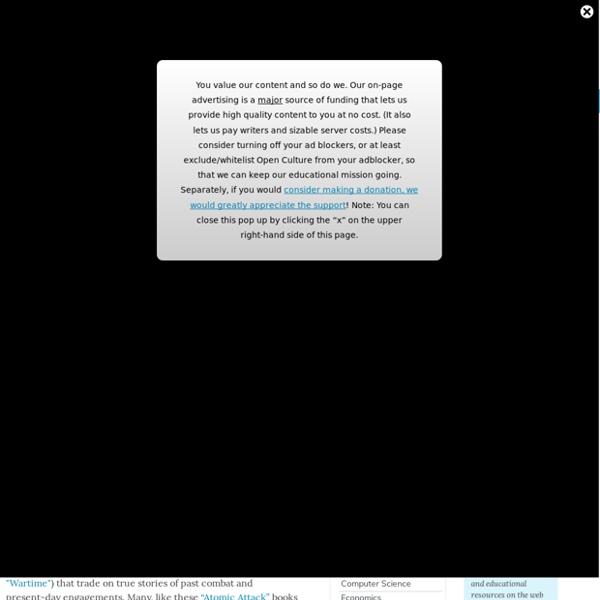 The Digital Comic Museum offers free access to hundreds of pre-1959 comic books, uploaded by users who often offer historical research and commentary alongside high-quality scans. The site’s moderators and administrators are particularly careful to avoid posting non-public-domain comics (a complicated designation, as described in this forum thread). The resulting archive is devoid of many familiar comic-book characters, like those from Marvel, D.C., or Disney. On the other hand, because of this restriction, the archive offers an interesting window into the themes of lesser-known comics in the Golden Age—romance, Westerns, combat, crime, supernatural and horror. The covers of the romance comics are great examples of popular art. Interested in understanding how homefront American culture reflected fighting in World War II and Korea, and the anxieties of the Cold War? The museum holds some unexpected and forgotten titles, like the Mad Magazine knock-off “Eh.” Related Content:

The Journal of the Jack Kirby Museum & Research Center For the 2013 Best Picture Oscar-winner Argo, Jack Kirby’s Lord of Light artwork was omitted and his crucial role in the CIA’s rescue plot was downplayed and distorted, but that is only a part of the problem with the film. …History cannot be swept clean like a blackboard, clean so that “we” might inscribe our own future there and impose our own form of life for these lesser people to follow. —Edward Said “ARGO – The Rescue of the Canadian Six” (artist unattributed)—CIA’s Intelligence Art Gallery Ben Affleck’s film Argo embodies the racism that Western governments display towards the peoples and governments of the East that Edward Said described in his groundbreaking study, Orientalism.

Free to Use and Reuse – and Animate! A Parade of Posters A French poster from the early 1900s advertises noodles and pasta using images of celebrities, some holding packages of the product. This month, we’re highlighting selections from the Library’s vast international poster collection on our Free to Use and Reuse page – and an animation contest. The posters we’re showcasing – on themes from travel, sports and entertainment to consumer goods and more – reflect a special collaboration between the Library and Poster House, a new museum that will open in New York City next year. The museum’s staff worked closely with specialists from the Library’s Prints and Photographs Division to select the 31 posters featured.

Superheroes a 'cultural catastrophe', says comics guru Alan Moore Comics god Alan Moore has issued a comprehensive sign-off from public life after shooting down accusations that his stories feature racist characters and an excessive amount of sexual violence towards women. The Watchmen author also used a lengthy recent interview with Pádraig Ó Méalóid at Slovobooks entitled "Last Alan Moore interview?" – to expand upon his belief that today's adults' interest in superheroes is potentially "culturally catastrophic", a view originally aired in the Guardian last year. "To my mind, this embracing of what were unambiguously children's characters at their mid-20th century inception seems to indicate a retreat from the admittedly overwhelming complexities of modern existence," he wrote to Ó Méalóid.

1.8 Million Free Works of Art from World-Class Museums: A Meta List of Great Art Available Online Since the first stirrings of the internet, artists and curators have puzzled over what the fluidity of online space would do to the experience of viewing works of art. At a conference on the subject in 2001, Susan Hazan of the Israel Museum wondered whether there is “space for enchantment in a technological world?” She referred to Walter Benjamin’s ruminations on the “potentially liberating phenomenon” of technologically reproduced art, yet also noted that “what was forfeited in this process were the ‘aura’ and the authority of the object containing within it the values of cultural heritage and tradition.” Evaluating a number of online galleries of the time, Hazan found that “the speed with which we are able to access remote museums and pull them up side by side on the screen is alarmingly immediate.” Perhaps the “accelerated mobility” of the internet, she worried, “causes objects to become disposable and to decline in significance.” Art Images from Museums & Libraries

THE LEGION OF SUPER-HEROES (II) The profusion of Super-Heroes The decline of The Legion of Super-Heroes, editorially speaking, happened when Mort Weisinger decided to displace the series from ADVENTURE COMICS to ACTION COMICS. Nevertheless, there were prooves of the decline before that and you will be able to see them in the number of magazines in wich The Legion appeared. If the Legion was published in its begining in almost every Superman family magazine, as we have seen in the page before, the contrary happens now. There is no collection with the Legion except ADVENTURE COMICS. 25 Million Images From 14 Art Institutions to Be Digitized & Put Online In One Huge Scholarly Archive Digital art archives, says Thomas Gaehtgens, director of the Getty Research Institute, are “Sleeping Beauties, and they are waiting to be discovered and kissed.” It’s an odd metaphor, especially since the archive to which Gaehtgens refers currently contains photographic treasures like that of Medieval Christian art from the Netherlands Institute for Art History. But soon, Pharos, the “International Consortium of Photo Archives,” will host 25 million images, Ted Loos reports at The New York Times, “17 million of them artworks and the rest supplemental material."

Legion of Super-Heroes: An Introduction The Legion of Super-Heroes is a large group of teen heroes whose adventures take place one thousand years in the future! The Legion's first appearance was like any other Silver Age Superboy (or Superman) story: freewheeling. In Adventure Comics #247 (April 1958), three super-teens invited the teenage Superboy to join their "club." Something about these heroes resonated strongly with fans and the characters sparked continued interest. In Adventure Comics #364 (Jan. 1968) DC editors even encouraged fans to vote for the next Legion leader (the results appeared in Adventure #368). The team's popularity eventually led to their independence from the Boy of Steel.

The Art Institute of Chicago Puts 44,000+ Works of Art Online: View Them in High Resolution After the fire that totally destroyed Brazil’s Museu Nacional in Rio, many people lamented that the museum had not digitally backed up its collection and pointed to the event as a tragic example of why such digitization is so necessary. Just a couple decades ago, storing and displaying this much information was impossible, so it may seem like a strange demand to make. And in any case, two-dimensional images stored on servers—or even 3D printed copies—cannot replace or substitute for original, priceless artifacts or works of art. But museums around the world that have digitized most--or all--of their collections don’t claim to have replicated or replaced the experience of an in-person visit, or to have rendered physical media obsolete. Digital collections provide access to millions of people who cannot, or will not, ever travel to the major cities in which fine art resides, and they give millions of scholars, teachers, and students resources once available only to a select few.

Free to Use and Reuse Page from “Red Riding Hood,” Lydia L.A. Very, 1863. Cover, right. The National Archives Catalog Search the National Archives Catalog and other National Archives resources at once for information about our records. We’re excited to announce that in the National Archives Catalog you can now: Enjoy the updated homepage featuring background images from Catalog records Add your comments on digitized records, descriptions, and authority records Find what you need with a more intuitive advanced search Efficiently browse search results with better “Next Page” link placement Track your citizen archivist contributions with updated user account pages Add data from scanned records to your developer toolbox with increased API functionality We Want to Hear from You!

Public Domain Collections: Free to Share & Reuse That means everyone has the freedom to enjoy and reuse these materials in almost limitless ways. The Library now makes it possible to download such items in the highest resolution available directly from the Digital Collections website. Search Digital Collections Image Archive Images of Afghanistan 1987-1994 Journalists and others risk their lives to keep the public informed in times of conflict. War imagery provides us with important information in the moment, and creates a trove of invaluable archival content for the future. Please be aware that … Continue reading 30 Days of Stuff CC Search is out of beta with 300M images and easier attribution Today CC Search comes out of beta, with over 300 million images indexed from multiple collections, a major redesign, and faster, more relevant search. It’s the result of a huge amount of work from the engineering team at Creative Commons and our community of volunteer developers. CC Search searches images across 19 collections pulled from open APIs and the Common Crawl dataset, including cultural works from museums (the Metropolitan Museum of Art, Cleveland Museum of Art), graphic designs and art works (Behance, DeviantArt), photos from Flickr, and an initial set of CC0 3D designs from Thingiverse. Aesthetically, you’ll see some key changes — a cleaner home page, better navigation and filters, design alignment with creativecommons.org, streamlined attribution options, and clear channels for providing feedback on both the overall function of the site and on specific image reuses. What’s next

The Cleveland Museum of Art Digitized 30,000 Artworks in the Public Domain Brace yourself for some meme-worthy Egyptian cats and gif-able Renaissance babies, the Cleveland Museum of Art (CMA) recently announced unrestricted digital access for nearly half its collection of artworks. Making good on its mission to “create transformative experiences through art, for the benefit of all the people forever,” CMA has opened its digital archives to the public through a partnership with Creative Commons Zero (CC0), a global nonprofit dedicated to the free distribution of otherwise copyrighted images. 30,000 artwork images — nearly half of the museum’s entire collection — are now available for digital users to remix, research, merchandise, print, and explore. Better yet, released metadata for more than 61,000 works will allow scholars to more easily investigate conduct research into provenance and object histories.