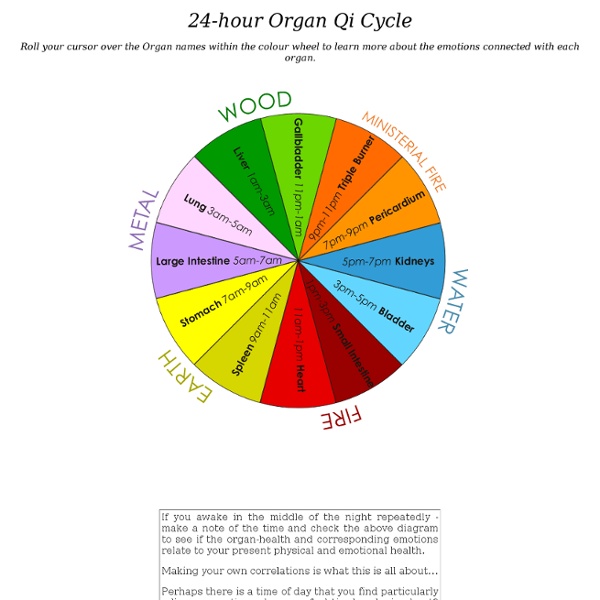 The Ying Qi Cycle By William Morris, DAOM, PhD, LAc Editor's note: This article is from an upcoming book, Neoclassical Pulse Diagnosis. It is the result of clinical application of classical passages. "When one is joyous, then the qi is in harmony and the mind is unimpeded. The nutritive qi and the protective qi pass freely," states Qi Bo in The Yellow Emperor's Classic. This article examines a method of diagnosing and treating the flow of the nutritive qi that is commonly used in Europe and America. Ying Qi Ying qi is translated as "construction qi" by Wiseman2 and "camp qi" by Unschuld.1 The definitions of nutrient qi and protective qi find root in military metaphors and could be likened to the U.S. The circulation of ying qi takes place throughout the day, remaining approximately two hours in each vessel. The two fire radicals in the upper portion of the character ying suggest not only a campfire, but also the fire of the sun, with the line below suggesting a rooftop. Figure 1: The Nan Jing pulse system.

Twelve Primary Channels The Twelve Meridians Scan through this whole page first. Click an organ to read everything about that organ. An ancient Chinese adage says: 'A tree grows from the roots.' The Five Elemental Energies and their cycles provide a practical working model through which the interrelationships between the human body and the natural environment may be understood and controlled. The traditional Chinese view of human physiology differs significantly from the Western view in that the Chinese have always focused attention on the function rather than the form of the vital organs. Over the ages, Chinese physicians discovered two fundamental principles which govern the vital organs and regulate their functional relationships. In the Chinese system, everything ultimately boils down to energy, a view which modern Western physics is beginning to verify. The below chart illustrates where the meridians begin and end on the surface of the body, not showing the exact paths they take.

What Is Qi (Chi)? What Is Qi (Chi)? Central to Taoist world-view and practice is qi (chi). Qi is life-force -- that which animates the forms of the world. In China, the understanding of qi is inherent in the very language. Many Different Kinds of Qi Practitioners of Chinese Medicine and qigong have identified many different kinds of qi. Balanced & Free-Flowing Qi = Health The fundamental insight of qigong and Chinese Medicine (acupuncture and herbal medicine) is that balanced and free-flowing qi results in health; while stagnant or imbalanced qi leads to disease. Feeling the Qi The capacity to perceive the flow of qi directly -- to actually see or feel it -- is something that can be cultivated through training in qigong or acupuncture. We might be in the habit of perceiving our world in terms of solid shapes and forms. Recommended reading: Orr, Katherine. Of Related Interest:

Online Journal ::: Chinese Medicine Times Qi Etymology[edit] The etymological explanation for the form of the qi logogram (or chi) in the traditional form 氣 is "steam (气) rising from rice (米) as it cooks". The earliest way of writing qi consisted of three wavy lines, used to represent one's breath seen on a cold day. A later version, 气, identical to the present-day simplified character, is a stylized version of those same three lines. For some reason, early writers of Chinese found it desirable to substitute for 气 a cognate character that originally meant to feed other people in a social context such as providing food for guests.[citation needed] Appropriately, that character combined the three-line qi character with the character for rice. Definition[edit] References to concepts analogous to the qi taken to be the life-process or flow of energy that sustains living beings are found in many belief systems, especially in Asia. The ancient Chinese described it as "life force". Pronunciation[edit] Philosophical roots[edit]

Acupuncture & Traditional Chinese Medicine Directory, Find An Acupuncture Practitioner ~ TCM Directory Chi and the Martial Arts by Rich Robson Almost everybody has heard that martial arts practice is good for improving one's health. Indeed, in most ads promoting a martial arts studio, health is given as the reason right after self-defense for studying the martial arts. While all of that is true, there is an area of health benefits, more powerful than those mentioned above, that is virtually unknown by the non-martial artist and, unfortunately, too often little understood by martial art instructors themselves! While the study of chi has been part of Oriental culture for thousands of years, it was unknown in the West until only a few years ago when Nixon opened the doors to China in the 1970s. It is axiomatic that the human body requires energy, or chi, to run efficiently. When it comes to human chi, there are two basic types of chi: pre-birth chi and post-birth chi. However, the chi produced by the metabolic process is not that which actually makes a person "alive."

Simple Productivity | Zen Habits Manual Therapy Mentor » Resources for Manual Therapy Techniques I have used these manuals extensively in both my practice as a therapist and an educator. The authors are experts in the field of Manual Therapy and I know them well. If you have any interest in incorporating Manual Therapy Techniques into your clinical practice, I highly recommend you consider purchasing these manuals. They are highly worth the small investment. THE UPPER QUADRANT (2nd edition) This book illustrates manual therapy assessment and treatment techniques for the cervical spine, thoracic spine, TMJ and the upper extremity. THE LOWER QUADRANT This book illustrates manual therapy assessment and treatment techniques for the lumbar spine, pelvis, and the lower extremity. Simply click on the titles above or visit whitmorephysiotherapy.com for access. The manuals feature easy to read descriptions and full colour, professional photographs of length tension testing techniques for the muscles of the upper and lower quadrants.