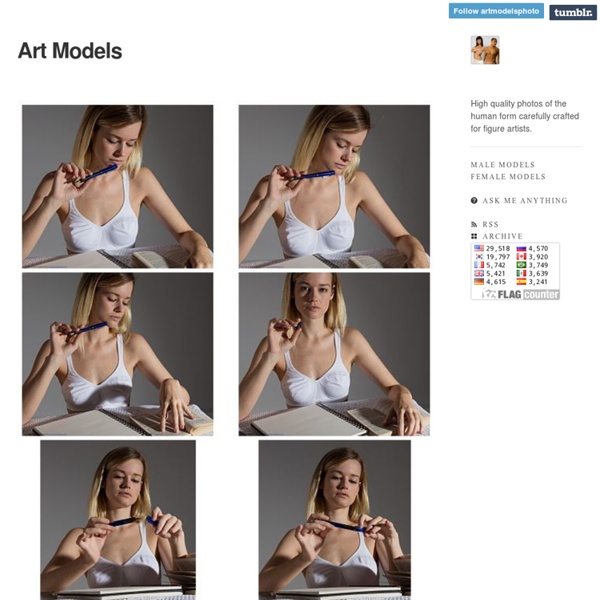 anatoref: Dynamic Poses by Modelfactory Took a while, but I tracked down the source at . Looks like an interesting resource for pose ideas. If only I spoke Korean and could figure out how to use the site, might buy some of their stuff. (via art-tutorial-reblog)

Character Lighting Tutorial By Joe “EarthQuake” Wilson First and foremost, I want to thank the massively talented Tim “spacemonkey” Appleby for giving us permission to use his awesome Sagat model for this tutorial. It’s easy to make cool tutorials when someone drops such great art content in your lap. Top 10 Apps for Architects Following our readers poll last year, here’s an updated list of what we think are the best ten apps for architects. From condensed versions of large scale programmes architects and designers use every day, to blank canvases to scratch ideas down onto, you might just find an app that could improve the way you work. #10 Photosynth (iOS/Windows)

Inside the original pitch for Uncharted "The thing that we wanted to focus on from the get-go were characters and story," he explains. "That was something we felt that — particularly back in 2005, 2006 when this first started getting developed — was something that was sort of an afterthought in the majority of video games out there. So we really wanted not only to tell this pulpy, action adventure-style thing, but also really try to develop some relatable, entertaining characters and have the story be what pulled you through the game."

70 Excellent Photoshop Resources By Kawsar Ali Adobe Photoshop is the tool of choice for many designers and artists. Photoshop can be used for almost every little task that involves graphic design. It is one of the finest pieces of software available on the market when it comes to digital image editing. A great attribute of Photoshop is that you can extend it with additional brushes, patterns, shapes, and more. In this massive collection of resources, you’ll find all sorts of resources including: tutorial sites, Photoshop Brushes, patterns, Photoshop Actions, showcases/collections, and much more. // 2DArtist Magazine / Latest Issue 094 October 2013 / How to create striking female What in this month… Breaking into the industry Jan Urschel chats about his journey into the industry and his experiences when he got there Explore fantasy narratives Wylie Beckert shares her whimsical sketches of enchanting characters, amongst fairytale-like settings The gallery Bastien Grivet and Gediminas Pranckevičius feature in this issue’s gallery selection of our top 10 images Learn to balance compositions Richard Tilbury finishes off his scene by adding characters to balance the composition

Perfectly Twisted Handmade Wire Wrapped Beaded and Gemstone Jewelry: Free Picture Tutorial - Part 1 - How to Wire Wrap a Designer Cabochon, Creating a One of a Kind Wire Pendant I've been emailed several times, being asked if I could create a tutorial on how to wire wrap an un-drilled cabochon. It's a difficult request in that most designer cabochon are not of a uniform shape or size... making the giving of exact measurements a hard thing to do. Then I realized... more important than giving exact measurements, is to perhaps, give the 'idea' and thought process behind wrapping an un-drilled stone.

Material Editor - How To set up Human Skin. Not using SubsurfaceProfile Using SubsurfaceProfile Getting Human skin to look correct when rendered is a very complex topic with no single perfect solution for getting correct results. Thirty Second Drawing What’s this training for? The idea of thirty seconds drawing app is tool for support gesture drawing.b You will improve in recognizing aspects of figures in a short amount of time, and be able to draw accruately with minimum lines.aking a large of number of sketches in a small amount of time may be good experience especially for begginners. This training will easily become your daily routine. Procedure

How to Produce (and Sell) Prints of your Artwork Last year, a request was made by fellow WC members asking me to share my knowledge of producing prints. Well, just as plants tend to grow towards the sun, articles seem to instinctively navigate towards the back burner. I've been working on this for about a year, and despite the natural phenomenon of procrastination, I've finally finished. So, in the realm of "better late than never", I give you my article: "Be fruitful and multiply"! No stronger words can be spoken of a lonely work of original art hanging isolated on the wall of a single residence, hidden from society, being enjoyed only by the limited few that happen to wander past it.

Marmoset Toolbag 2 Shader Setup for Characters [ #Shader ] Joe Wilson and Lee Devonald demoed various tools and features related to character setup in Toolbag 2, such as the skin shader, hair, lighting, etc. The video is a copy of a live stream hosted on June 23rd, 2014 .