What is the universe made of? - Dennis Wildfogel 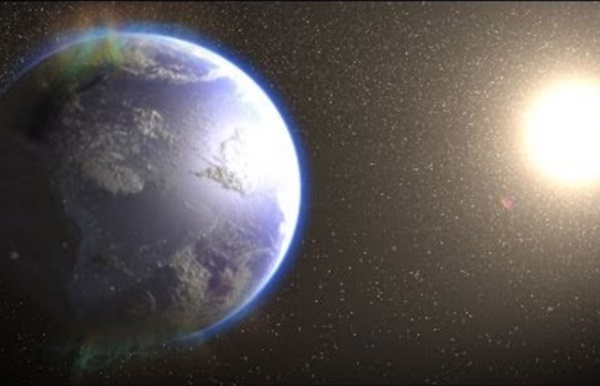 Sun Orbit Everything’s orbiting something it seems. The Moon goes around the Earth, and the Earth orbits the Sun. But did you know that the Sun orbits the Milky Way galaxy? Astronomers have calculated that it takes the Sun 226 million years to completely orbit around the center of the Milky Way. Since the Sun is 26,000 light-years from the center of the Milky Way, it has to travel at an astonishing speed of 782,000 km/hour in a circular orbit around the Milky Way center. It’s estimated that the Sun will continue fusing hydrogen for another 7 billon years or so. Are you interested in more articles about the Sun? Here’s an article that describes the process astronomers used to determine the orbit around the Milky Way. We have recorded an episode of Astronomy Cast just about the Sun called The Sun, Spots and All. References:NASA Imagine the Universe! Related Earth's Orbit Around The Sun November 21, 2014 In "Astronomy" Galaxy Rotation May 11, 2009 Galactic Alignment

Science by Doing - Home Speed of the Milky Way in Space As we all know, a galaxy is a massive ensemble of hundreds of millions of stars. The galaxy where we live in today is called the Milky Way. The name itself came from the ancient Greek galaxies kyklos, or ring of milk, due to its faint milky appearance. Our Milky Way is a large spiral galaxy. Ever since four hundred years ago the settlement that the Earth is moving about the sun, and one hundred and fifty years ago that the sun is moving about the center of the Galaxy, it shouldn't be surprising if we learned that the Galaxy is also moving. In 1928, an American astronomer Milton La Salle Humason found a galaxy that was receding at a speed of 3,800 km/s, and by 1936, when he observed the same galaxy again, he found it receding at a speed of 40,000 km/s. If our galaxy exerted a repulsive force, that force should be felt with the local groups, however it wasn't. In conclusion, galaxies experience neutral attractions on one other. Patricia Kong -- 1999 Burstein, David.

MACS J0717- New Image Exposes Violent Collision of Galaxies - Physics-Astronomy Astrophysicists at the National Radio Astronomy Observatory (NRAO) have collected data from a variety of devices to generate a stunning compound image of crashing galaxy clusters mutually identified as MACS J0717. MACS J0717 is about 5.4 billion light years away from Earth in the Auriga constellation. The composite makes this the record well-studied galaxy cluster, and the photo was issued at the 224th Meeting of the American Astronomical Society. Image Credit: Van Weeren, et al.; Bill Saxton, NRAO/AUI/NSF; NASA. The blue and red areas symbolize several of the most sensitive images ever collected by these instruments, and the radio waves exposed outcomes that were pretty amazing. The distorted red area is the most thrilling, as it is assumed to specify particles that interrelate with magnetic fields throughout the collisions, with radio waves being released as a consequence. MACS J0717’s lensing power will also be used by the Frontier Fields task for the Hubble Space Telescope.