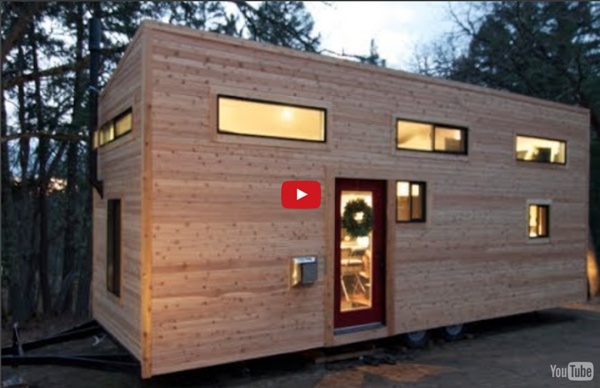 Brilliantly Designed Small Apartment in NYC Has Everything You Need to Live and Work Now here’s a brilliantly designed small apartment in East Village area of Manhattan in New York City. Michael, the apartment owner, uses the space as both home and office which makes the 500-square-feet all that much tighter. I also work and live out of my apartment which is about 450-square-feet while sharing it with my girlfriend as well. The amazing part about Michael’s space is the enormous amount of storage that he has created which is illustrated at the bottom of this post. All of this storage space allows the apartment to be a home instead of a workplace quite easily when friends or family visit. There’s even an upstairs sleeping loft but thanks to the tall ceilings inside it doesn’t look like it feels cramped at all. What I thought might be one of your favorite parts of the design is the staircase that leads up to the loft because it has built-in drawers underneath each step. Photos by Frank Ouderman and Sean Karns I encourage you to see the rest of it below:

Amazing, Off-Grid, Modern Tiny House Tour - Living Big In A Tiny House | Living Big In A Tiny House At 15 Square meters and completely off-grid, Brett Sutherland has constructed a true, tiny house treasure. Packed with unique, space saving design elements, Brett has created a fantastic space to both live and work. Perhaps best of all, this was all achieved on a budget of NZ$21,000. The Tiny House was constructed on his parents property, and will soon be moved to a friends property in Bethells Beach in Auckland. This modern tiny house is filled with treasures obtained over a lifetime of adventure, and may just be the ultimate bachelor pad. Make sure you are following us on YouTube and Facebook to keep up-to-date with our Tiny House Adventures. To find out more about this Tiny House, click here.

Small NYC Apartment Transforms 420 SF to 1100 This small NYC apartment magically transforms 420 square feet into 1100 square feet of usable space with the use of multifunctional furniture. It’s known as the LifeEdited apartment in the Soho/Manhatten area of New York City. What you’re about to see here is the apartment of Graham Hill, founder of treehugger.com. He bought the apartment back in 2010, as you’ll see in the video below, and has since renovated it. The small NYC apartment can become a huge master bedroom or a giant open office with windows thanks to the built in furniture that transforms the space and hides all of your stuff. Photo Credit Faircompanies/YouTube Below is a photo of the apartment before the renovations. The photo below is the apartment in office mode with the bed tucked away into one of the walls. If you’re having people over there’s an entire wall that you pull out to reveal a second bedroom with even more storage including a spot to store a bicycle and pull out bunk beds for guests.

Could You Live and Work in this Tiny 78 Square Foot Apartment? Do you think you could live in this 78 square foot apartment? Meet Luke Clark Tyler. He’s an architect who’s been living in extremely small spaces for a few years. Two years ago he was in a 96 square foot apartment. In his last move, he chose to downsize even more. The place is so small that you can barely fit a regular bed in it. He made it so that it has plenty of extra storage underneath to store winter clothes and tools. His bed looks a lot more comfortable than your ordinary pull out couch or futon. Notice on the screen shot below how the mattress is tucked away against the wall on the right. Here is the bed all set up… What else could you cram into a 78 square foot space? clothesplatesmicrowavebooksspicescleaning productsand personal hygiene products …inside of a built in storage unit. He also has a mini refrigerator underneath his desk. The most surprising part is that he works from home as an architect. His home is similar to what an extremely small hotel room would be like.

Tiny House From Reclaimed Wood | Reclaimed Wood Blog by Greg Cater September 27, 2013 Recently I went on a field trip with my friend Kent Griswold from Tiny House blog. We headed west to a little town on the California coast called Point Reyes Station, which is located about an hour north of San Francisco and is situated on the northeast side of Point Reyes National Seashore. We were invited by a homeowner named Colin to pay a visit to his tiny house, which measures 8 feet wide and 18 feet long or 144 sq ft. Colin’s home scores big for his use of reclaimed wood and other salvaged materials including windows and doors. The only wood product that was purchased new for the home was the sheeting plywood, as it can be a challenge to find structurally sound reclaimed plywood. Moving from build sit to current location I asked Colin about where he found reclaimed wood for the project. T & G fir flooring The vertical is on top and horizontal on the bottom, which adds interest and gives the house a great look. Kent & Colin talking about the Tiny house

Own Less, Live More: 700 Sq. Ft. Small House of Freedom When it comes to small houses planning and design really counts. This couple began creating ideas for their future “perfect” home early in their marriage. They wanted a home that was big enough for just the two of them (and their dogs). This way they’d have more time and money for their personal interests. See more of Lily Copenagle and Jamie Kennel’s small house below. And the home is environmentally friendly, too. Cleaning is a breeze since you can plug the vacuum in at one spot and reach the entire house from there. It’s a one room design with a curtain for privacy to enclose the bedroom when desired. A Rais wood stove that swivels is what keeps the place warm. They were also able to include an office area for the both of them. Along with book shelves throughout to store their collection of literature. Another one of their smart design moves was putting the washer and dryer in their clothes closet so that doing laundry is quick, easy and painless. Genius, I say.

Cai (tm) House Nick Hurt of Cambridge, VT has created a cabin he calls the Cai ™ House. This is a portable cabin. Nick is in the process of getting his business off the ground and wanted to share his design here on the Tiny House Blog. The cabin pictured here is a prototype cabin and is not for sale. Nick describes his prototype cabin below: Definition- a two story 420 square foot portable, energy efficient, low impact, self sufficient structure that can be set up by one person in 6-8 hours. Where transformer toy meets housing- Everything stores neatly inside during transport and unfolds into a cute little house that can be folded up to be transported again. The prototype shown in the photos is not insulated and was constructed for personal use. I would like to custom build you a custom cai ™ house utilizing highest quality sustainable materials assembled by Vermont’s finest Master Carpenters. Intended uses- 1. General Information- 1. Cai (tm) House Folded Living Area Loft Floor Plan Loft Floor Plan

Living Cube Furniture Spacious Cabin on Wheels with Large Windows Side View I love how it has so many windows and the large sliding glass doors. Side View with Plenty of Covered Porch Space If it were up to me I would have put the sliding glass doors to give you direct access to the covered porch. Kitchen with Lots of Cabinets Bathroom with Full Shower Floor Plan This model is called the Puget Sound. There are a bunch of optional features, too, which I’ll list for you in bullet format below: 6′ or 10′ covered front porchDouble doors accessing front porchAdditional length up to 33′32″ showerPine tongue & groove interiorDrywall interior For even more info, specs and pics on this Park Model style tiny house on wheels go here to Rich’s Portable Cabins.

Create 25sqft Of Extra Storage By Building These Box Stairs I know that many tiny houses today don’t have staircases in them because people opt for ladders instead; however, I don’t think ladders are a great option for several reasons. First and foremost, there’s nothing quite like having to climb down a ladder in the middle of the night to use the bathroom. Further, as the home’s inhabitants get older, the use of a ladder will likely become more and more difficult. The good news is that a staircase can work in the right size tiny home and the space underneath it can provide for a lot of storage. Below I show you a step-by-step approach to creating just such a space. In the example shown, the treads (what you step on) are 10″ deep and the risers (the height of each step) are 8 7/8″ tall and the entire unit is built from 3/4″ cabinet grade plywood. Learning how to calculate stairs is a lesson in and of itself, but I’ll give you a quick primer here to get you started. Measure the height of the space requiring stairs. Now, let’s build some boxes…