Database of the Power Elite 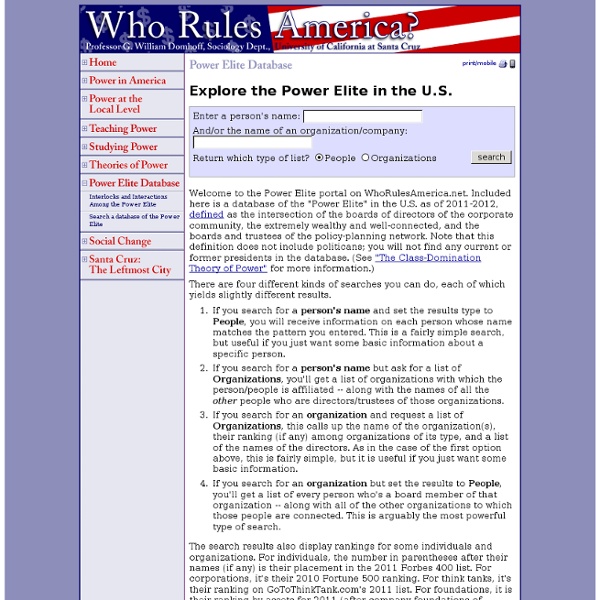 Welcome to the Power Elite portal on WhoRulesAmerica.net. Included here is a database of the "Power Elite" in the U.S. as of 2011-2012, defined as the intersection of the boards of directors of the corporate community, the extremely wealthy and well-connected, and the boards and trustees of the policy-planning network. Note that this definition does not include politicans; you will not find any current or former presidents in the database. (See "The Class-Domination Theory of Power" for more information.) There are four different kinds of searches you can do, each of which yields slightly different results. If you search for a person's name and set the results type to People, you will receive information on each person whose name matches the pattern you entered. The search results also display rankings for some individuals and organizations. Click here for more information about the sources of the data in this portal.

Executive Intelligence Review The Return of the Polar Vortex Is Actually a Good Thing - Wired Science NASA image showing the polar vortex in January reaching down over the middle-U.S. Image: NASA Just when you thought it was safe to go outside again, the polar vortex is back, blasting the Midwest and eastern half of the U.S with very cold weather. While this will undoubtedly be unpleasant, there is an upside. You might remember the polar vortex from January and later in January, when it brought extremely low temperatures to a good deal of North America. Models are “very confident that it’ll be significantly colder than average” in much of the eastern two-thirds of the nation, said Mike Halpert, acting director at NOAA’s Climate Prediction Center. Those states are currently feeling a little relief as the weather has momentarily cleared up in the Midwest, leading to warmer temperatures in the 50s and 60s and heavy rain instead of snow. The polar vortex originates in the far north, where sunlight has disappeared during the winter season, creating the Northern Hemisphere’s coldest air.

Secret government documents reveal vaccines to be a total hoax (NaturalNews) If you have children, you are more than likely already aware of the official U.S. Centers for Disease Control and Prevention (CDC) "Immunization Schedules," which today recommend an astounding 29 vaccines be given between birth and six years of age, including yearly flu shots, as well as another five to 16 vaccines between ages seven and 18 ( But a recent investigative report compiled by Dr. Though her paper focuses primarily on the British health system's elaborate cover-up of the dirty truth about its own national vaccination program, the tenets of the study's findings still apply to vaccination schedules in general, which are typically designed for the purpose of serving corporate interests rather than public health. You can access Dr. Through several Freedom of Information Act (FOIA) requests, Dr. "Official documents obtained from the U.K. These are some strong accusations, but the information Dr. If this is not bad enough, Dr.

New World Order, Conspiracy, UFOs photographs NWO photoalbum Click on a picture to enlarge it. Some picts can't be enlarged. Masonic and Illuminati symbols Handsignals The Bushmen 911 The hoax of the new millenium. Some recommended links for more info on 911: Video: "Loose Change", 2nd edition Free Google version Video: "Loose Change", 2nd edition Get the DVD Video: "Loose Change", 1st edition Also has various other 911 videos Video: "Martial Law 9/11" By Alex Jones - Now FREE online! Video: "SEPTEMBER 11: Evidence to the Contrary" A compilation of some material of the previous videos, and a few others. Scholars for 9/11 Truthwhatreallyhappened.com 9-11 pagesletsroll911.org Video: "7/7 London Bombings - A Summary Of The Evidence" This stuff doesn't only happen in the USA... General Logos Subliminal images ChemtrailsNot a hoax and possibly very devastating. Please note however that not ALL the trails you see in the sky are chemtrails. So how to tell the difference between a contrail and a chemtrail? Go back to photoalbum index.

NSA Releases UFO Files, Following The FBI's Lead - UFO Blogger : Exclusive 2013 UFO News Stories, Flying Saucers and UFOs Sightings Videos An exciting time is occurring currently, a disclosure movement of sorts has been happening right under neath the virtual radar. The FBI recently revamped their UFO files in a section now known as the Vault. In this are documents that have been available to the public for some time now, what else was in there was a new sense of hope and optimism for UFO believers in general. Lets continue a second entity has also entered the playing field in opening the door for full disclosure of all UFO files, documents, shared technologies, crashes, abductions cases, and so on. The documents listed on this page were located in response to the numerous requests received by NSA on the subject of Unidentified Flying Objects (UFO). To select a document click on the document title, and wait for the PDF version to be downloaded to your local viewer.

Medieval History Lectures: Dr. Lynn H. Nelson Please take into consideration the purpose and audience for which the lecture notes listed above were written. For a good many years, I taught a three-credit-hour freshman survey entitled Introduction to Medieval History to enrollments of room-size - generally three hundred students. During those years, the University of Kansas maintained an open enrollment policy in which all graduates from accredited Kansas high schools were admitted to the University. Consequently, my lectures were both basic and episodic, concentrating on major events and topics that would prepare the students for further enrollments in Humanities courses and attempting to demonstrate that the study of History could be both useful and enjoyable. Those lectures entitled Thoughts on Reading . . . are an exception to this characterization. I might add that I assert no proprietary interest in these materials but offer them freely for public use.

Founding Fathers of the United States Terminology[edit] Within the large group known as the "Founding Fathers", there are two key subsets, those who signed the Declaration of Independence in 1776 and those who framed the Constitution in 1787. A further subset includes those who signed the Articles of Confederation.[1] Some historians define the "Founding Fathers" to mean a larger group, including not only the Signers and the Framers but also all those who, whether as politicians, jurists, statesmen, soldiers, diplomats, or ordinary citizens, took part in winning American independence and creating the United States of America.[2] Historian Richard B. Morris in 1973 identified the following seven figures as the key Founding Fathers: John Adams, Benjamin Franklin, Alexander Hamilton, John Jay, Thomas Jefferson, James Madison, and George Washington.[3] Three of these (Hamilton, Madison and Jay) were authors of the The Federalist Papers, advocating ratification of the Constitution. Background[edit] Political experience[edit]

United States Constitution The Constitution was adopted on September 17, 1787, by the Constitutional Convention in Philadelphia, Pennsylvania, and ratified by conventions in eleven States. It went into effect on March 4, 1789.[2] Since the Constitution was adopted, it has been amended twenty-seven times. The first ten amendments (along with two others that were not ratified at the time) were proposed by Congress on September 25, 1789, and were ratified by the necessary three-fourths of the States on December 15, 1791.[3] These first ten amendments are known as the Bill of Rights. The Constitution is interpreted, supplemented, and implemented by a large body of constitutional law. History First government The Articles of Confederation and Perpetual Union was the first constitution of the United States of America.[6] It was drafted by the Continental Congress in mid-1776 to late 1777, and formal ratification by all 13 states was completed in early 1781. Congress was paralyzed. Constitutional Convention Ratification

The People's History: The War on Terror is a Fraud: How the West has Fostered Radical Islam and Actively Keeps it Alive. "In the mid-'80s, if you remember... Saudi Arabia and the United States were supporting the Mujahideen to liberate Afghanistan from the Soviets. He [Osama bin Laden] came to thank me for my efforts to bring the Americans, our friends, to help us against the atheists, he said the communists. Isn't it ironic?" - Prince Bandar bin Sultan of Saudi Arabia, on Larry King Live1 In 2009, a series of events occurred that ought to have raised questions in the press. The press did cover these stories, but independent of one another. Just days after the July 7, 2005 London terror attack, and less than a month before his untimely death, the Right Honorable Robin Cook, former UK Foreign Secretary, wrote a scathing and emotional review of the War on Terror in The Guardian. “Bin Laden was, though, a product of a monumental miscalculation by western security agencies. Operation Cyclone All of this began before the Soviets invaded Afghanistan. Early Years of Osama Bin Laden The Taliban Osama Runs Wild