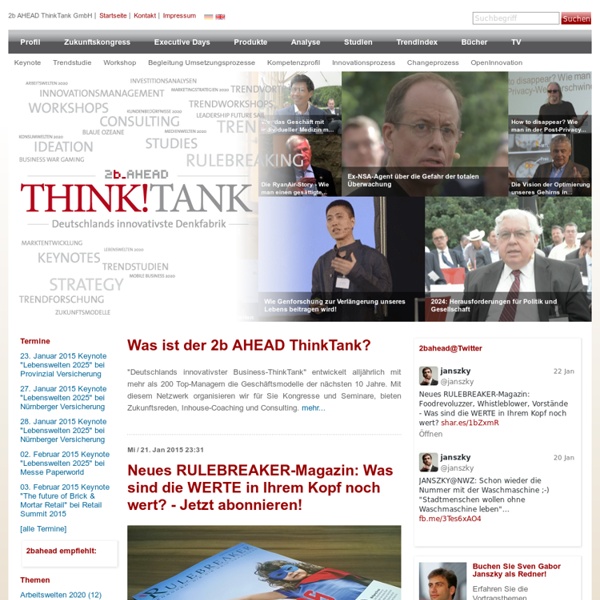 zurich.minds Gary Hamel’s Management 2.0 In my previous post, I introduced you to Drew Williams. For seven years Drew served as assistant vicar at St. Andrews, an Anglican parish in Chorleywood, England. When he arrived in 2003, Drew found a church that was big but not growing, and a congregation that was loyal but not energized. Mark Stibbe, head vicar at St. On a blustery November night, just a few short months after taking up his post, Drew stood in front of a nearly-full church and presented his strategy. Drew admitted he didn’t have a precise plan for how to put his idea into practice, but he asked everyone present to think about the kind of difference they thought they could make if they were part of a more intimate community. At the end of his talk, Drew announced that he’d hold a follow-up session a month hence, on December 6.

nextpractice -A Matter of Fact in a World of Values Neurowissenschaften Zen Leadership School : home Matthias Horx - Trend- und Zukunftsforscher    Denkfabrik für Wirtschaftsethik - Das MeM - MeM Denkfabrik Stephen R. Covey Choosing Not to be Angry May 4th, 2010 I was teaching the 7 Habits at a professional gathering last week when I experienced something remarkable. While I spoke about Habit 1, Be Proactive, and some of the principles for being responsible for your own life or carrying your own weather and choosing your own response, a gentleman from the audience stood up. Right […] Launched My Blog on Huffington Post—“Our Children and the Crisis in Education” April 22nd, 2010 I am pleased to announce that I am now a contributor to the Huffington Post. A New Tool to Help You Create a Great Career April 9th, 2010 When you are looking for work or trying to advance your career, you need all the help you can get. 25 Years of Dot-Com. March 18th, 2010 March 15, 2010 marked the 25th anniversary of the first “dot-com” registration on the Internet. Start Small with Your Resolutions for 2010 December 29th, 2009 The start of a New Year is always special. Success on the Far Side of Failure—Learning from Failures