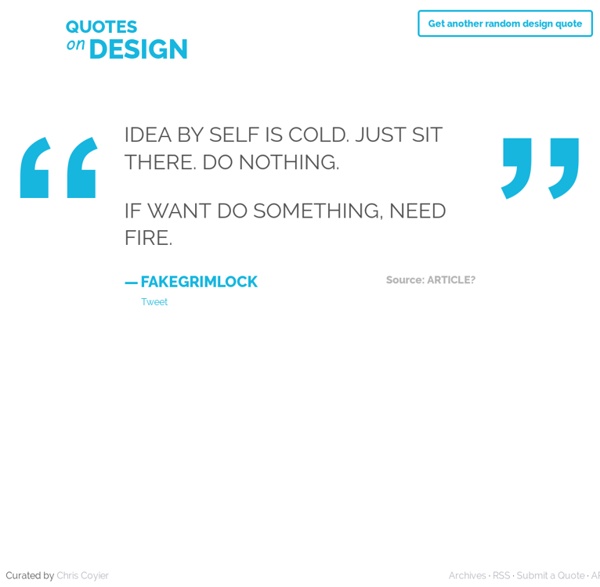 Wrap magazine For the latest issue of Wrap we were lucky enough to be able to work with the super talented illustrator Alex Walker who created this image, ‘Cosmic Sorbet’, in response to the issues theme of balance. Alex said he made this image with quite a free-form approach to try and capture a sense of visual balance and to make something ‘process-led and fun’. Alex’s artwork is available as a pull-out print/wrapping paper in Wrap issue 11- ‘Balance’, alongside a in-depth interview with him. Freelance Graphic Design Inspiration and Design Gallery | DesignersCouch.org Mike Kruzeniski – How Print Design is the Future of Interaction This post describes “How Print Design is the Future of Interaction,” a talk I gave at SXSW Interactive on March 12, 2011. The slides from the talk are available to view on Slideshare, and you can see some of the discussion that followed on Twitter here. Introduction There are three areas that I covered in the talk. First, how the visual language of UI has evolved and been shaped in to what we find in the interfaces we are familiar with today. Second, I’ll discuss why I think a new approach to the visual design of interfaces, influenced by Print Design, is emerging and necessary. When I talk about “Print” here, I’m not interested in the literal transfer of printed media on to screen, like we see in some applications which try to recreate the exact textures and layouts of newspapers, for example. A Brief History of Interaction Design If we trace the history of modern User Interface, it all begins with Vannevar Bush’s Memex machine. Artifacts and Information Learning from Print 1. 2. 3. 4. 5.

What To Tell the Kids About Guns When I was about eight or nine, I found Clyde M. Narramore’s book How to Tell Your Children About Sex hidden in my dad’s closet. Presumably he had been preparing himself to “have the talk,” but I got to his crib sheet first. I poured over the chapters on “Family Dressing and Undressing,” “Learning from Nature,” and “Experimentation.” Curiously, in light of all the gun control protest today (and I’m a firm supporter) this booklet from 1957 was more egalitarian than most — ”when a boy or GIRL wants a gun.” “Come the day when the settlers on your block have routed the last redskin,” reads the first sentence of the booklet, “when your Backyard Cowboy and his trusty cap pistol have freed the neighborhood of the last rustler [or intruder], your boy — or girl — will want a gun, a real gun, one that shoots. Guns are part of American life and narrative. There are many choice tidbits of wisdom and lore (click on image to make larger).

Dream Big by Peter Fecteau | koikoikoi - StumbleUpon “Dream Big” was a year-long project in which Pete created a mosaic of Dr. Martin Luther King Jr. using 4,242 Rubik’s Cubes. > petefecteau.com The Shape of Design by Frank Chimero EDIT: Updated details on shipping, especially for our international friends. Hi. My name's Frank Chimero. I've been teaching for the past 5 years, and I've always been a bit frustrated that there isn't a nice, concise book that overviews the mental state of a successful designer while they go through their creative process. There are new challenges in the world that need to be discussed, and I think design is a prime lens to consider these topics. The Shape of Design isn't going to be a text book. But really, this book aims to look at the mindset and worldview that designing develops in order to answer one big, important question: How can we make things that help all of us live better? As I said, these aren't new topics for me. See right for the specifics on how to get each, but here's a bit of a preview: The Book! Donor Special Edition Book (with the "Shape Jacket") Midnight Oil Poster (18x24") Paper Cuts Original Art Pieces by Frank Chimero (previous works, you'd be getting new work)

Plantillas para blogger Win the Business with this Elevator Pitch - Steve W. Martin by Steve W. Martin | 7:00 AM August 22, 2012 Pretend that you are in an elevator at one of your industry’s trade shows. You’re heading down to the lobby when the doors open on the thirtieth floor. You instantly recognize the executive who walks in and quickly glance at his name badge to confirm he is the CEO of the most important account you would like to start working with. So, how did you do? They use truisms: They believe their company’s own marketing pitch, which makes claims that are not considered entirely true by the listener. They describe themselves using buzzwords: They repeat industry buzzwords or, worse yet, use technical buzzwords that are known only within their company. They use fillers: They make too much small talk or ask frivolous questions that reduce their stature to the customer. They demean themselves or the listener: Their statements turn them into mere salespeople, not business problem solvers. Here’s an example of a poor elevator pitch. Hello, Norman.

Opinions on Corporate and Brand Identity Work UnderConsideration is a graphic design firm generating its own projects, initiatives, and content while taking on limited client work. Run by Bryony Gomez-Palacio and Armin Vit in Austin, TX. More… products we sell Flaunt: Designing effective, compelling and memorable portfolios of creative work. Brand New Conference videos / Individual, downloadable videos of every presentation since 2010. Prints / A variety of posters, the majority from our AIforGA series. Other: Various one-off products. writing Graphic Design, Referenced: A Visual Guide to the Language, Applications, and History of Graphic DesignRockport: 2009 Women of Design: Influence and Inspiration from the Original Trailblazers to the New Groundbreakers HOW Books: 2008 The Word It Book: Speak Up Presents a Gallery of Interpreted WordsHOW Books: 2007

Steve Jobs, a designer at heart We at WDD are deeply saddened by Steve Jobs’ passing… And while the Internet is buzzing with people’s heartfelt emotions about his life’s impact and legacy, we’d also like to pay tribute with this modest homage. A designer at heart, design was at the core of Steve’s life and that translated to revolutionary and yes we can also say ‘magical’ products. But he says it better: “Design is not just what it looks like and feels like. Design is how it works.” And we can only imagine how many lives have been influenced by his vision and how deep he reached into all the corners of the world… In this post, we’ve collected some rare photos of Steve as well as some famous quotes that depict his visions and personality. Comments are open for you to share how he impacted your career as a designer and as a person, we sure know that he has deeply influenced us! “Your work is going to fill a large part of your life, and the only way to be truly satisfied is to do what you believe is great work.