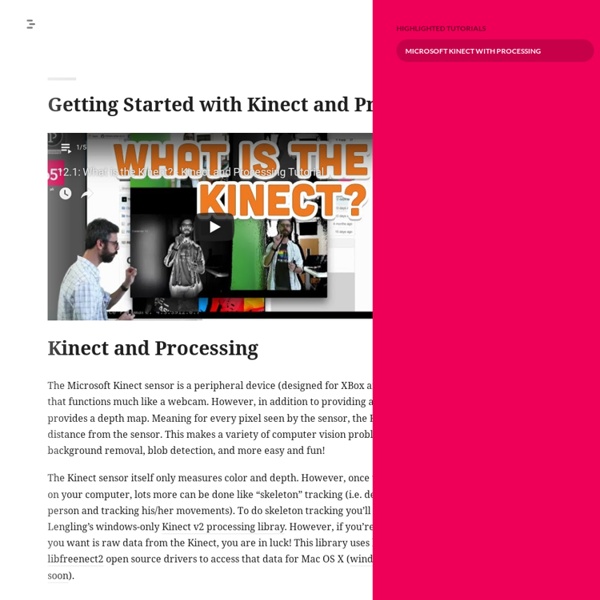 The Microsoft Kinect sensor is a peripheral device (designed for XBox and windows PCs) that functions much like a webcam. However, in addition to providing an RGB image, it also provides a depth map. Meaning for every pixel seen by the sensor, the Kinect measures distance from the sensor. This makes a variety of computer vision problems like background removal, blob detection, and more easy and fun! The Kinect sensor itself only measures color and depth. However, once that information is on your computer, lots more can be done like “skeleton” tracking (i.e. detecting a model of a person and tracking his/her movements). What hardware do I need? First you need a “stand-alone” kinect. Standalone Kinect Sensor v1. Some additional notes about different models: Kinect 1414: This is the original kinect and works with the library documented on this page in the Processing 3.0 beta series. SimpleOpenNI I’m ready to get started right now What is Processing? What if I don’t want to use Processing?

Kinect Graffiti Tool by Jean-Christophe Naour (@njc002) #processing Kinect Graffiti Tool is work in progress by Jean-Christophe Naour, Seoul (Korea) based designer. Idea behind the project is to use Kinect to track the motion of graffiti, not too dissimilar from Graffiti Analysis project by Evan Roth. Instead of visualising only hand gestures, Jean-Christophe’s Processing application visualizes body and drawing trough different angles in realtime, attempting to understand surrounding space, etc…using light painting as a reference. This clip and images below show the latest test, focused on the generation of 3d strokes + openGL mapping. Earlier version also included at the bottom of the post.

KinectSEN - Processing Kinect Resources For a little effort you can expand the opportunities for using the Kinect three fold by downloading Processing. Like the Kinect Processing is world wide, like the programs on the main page it is also free, and all these wonderful interactive programs will cost your special needs school setting nothing. Processing is a coding platform designed for artists and graphic designers. It is open source and free and can be downloaded onto PC's or Macs. You then run the Processing program and you can either write your own program or 'sketch' or, and this is where the ease comes in, you can download and open someone else's sketch from the Internet.

Kinect Hacking using Processing About Processing from Processing.org: Processing is an open source programming language and environment for people who want to create images, animations, and interactions. Initially developed to serve as a software sketchbook and to teach fundamentals of computer programming within a visual context, Processing also has evolved into a tool for generating finished professional work. Today, there are tens of thousands of students, artists, designers, researchers, and hobbyists who use Processing for learning, prototyping, and production. About Kinect The Kinect is a stereo camera (actually triple camera including the IR sensor) that has some pretty sophisticated firmware algorithms that can spit out a wide variety of depth and motion tracking data. About this tutorial "Kinect for Processing" involves configuring a set of libraries that can be compiled with the Processing programming environment to parse and manipulate Kinect data.

Kinect - Medien Wiki The Microsoft® XBOX 360 Kinect is a motion controller developped by PrimeSense. It projects a pattern with infrared light and calculates a depth image using a camera. It also has a color camera and four microphones. jpbellona simpleKinect Application simpleKinect is an interface application for sending data from the Microsoft Kinect to any OSC-enabled application. The application attempts to improve upon similar software by offering more openni features and more user control. The interface was built with Processing, utilizing the libraries: controlP5, oscP5, and simple-openni. Because I used open-source tools, and because the nature of the project is to stimulate creativity, simpleKinect is free to use. simpleKinect Features

Identifying People in a Scene with the Kinect We'll start with the sketch we wrote to draw the depth image from the Kinect in Drawing Depth with the Kinect: import SimpleOpenNI.*; SimpleOpenNI context; void setup(){ // instantiate a new context context = new SimpleOpenNI(this); // enable depth image generation context.enableDepth(); // create a window the size of the scene size(context.depthWidth(), context.depthHeight()); } void draw(){ // update the camera context.update(); // draw depth image image(context.depthImage(),0,0); } The OpenNI library does all the work for us to identify people or other moving objects in a scene. It does this with the scene analyser which is turned on by adding context.enableScene() to the setup().

Setting up Kinect on Mac Update 27/04/2013: Latest test of the OpenNI 2.1.0 beta and NITE2 was good but it’s not working with the SimpleOpenNI library yet. I’ll keep watching for updates and let you know when it’s all running. Thanks to open source projects like OpenNI and OpenKinect, you can now use Microsoft’s Kinect on more than just Windows. This guide is for those running OSX 10.6.8 or newer but might also be applicable to anyone still running older versions or Linux.

ANDIAMO: real-time video tool I couple of weeks ago I started coding up in Processing a tool for live visual performance using real-time video effects, drawing, animation and computer vision techniques. The name of this tool is ANDIAMO, which is an Spanish acronym for ANimador DIgital Analógico MOdular (Digital-Analog Modular Animator). From a technical point of view, one of the goals of ANDIAMO is to use the Processing libraries that I have developed so far (GLGraphics, GSVideo, GPUKLT, etc) to show the possibility of handling real-time video and GPU effects within Processing. openFrameworks Skeleton Tracking using Kinect : Overview - Voratima I’ve been wanted to experiment with skeleton tracking with Microsoft Kinect in forever. Finally, that time has arrived. And, boy!

Synapse for Kinect SYNAPSE for Kinect Update: There’s some newer Kinect hardware out there, “Kinect for Windows”. This hardware is slightly different, and doesn’t work with Synapse. Be careful when purchasing, Synapse only supports “Kinect for Xbox”. Update to the update: There appears to also be newer “Kinect for Xbox” hardware out there. Model 1414 Kinects work with Synapse, but I’m getting reports that the newer 1473 models do not work. kinect_calibration/technical Technical description of Kinect calibration Description: Technical aspects of the Kinect device and its calibration Tutorial Level: ADVANCED Authors: Kurt Konolige, Patrick Mihelich Imager and projector placement

Overview We're thrilled to announce the launch of Processing 2.0—the latest incarnation of the programming language, development environment, and online community that has grown dramatically since its debut in 2001. This new release builds on the versions of Processing that have been downloaded almost two million times. We invite you to download Processing 2.0 from www.processing.org. The Processing software is free and open source, and runs on the Mac, Windows, and GNU/Linux platforms.