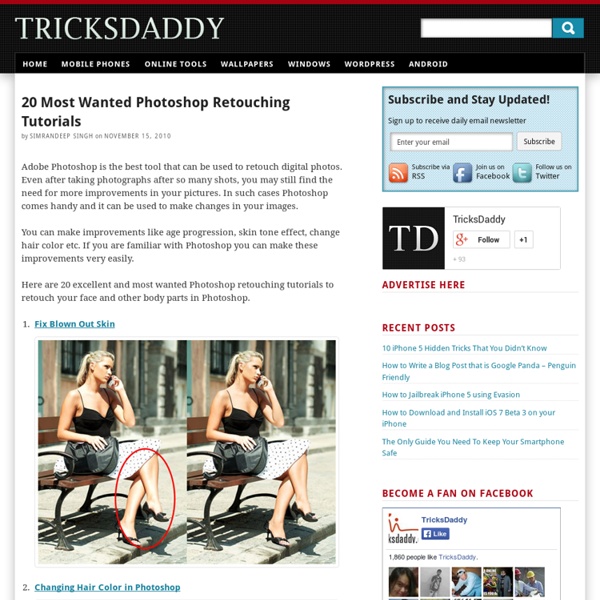 Adobe Photoshop is the best tool that can be used to retouch digital photos. Even after taking photographs after so many shots, you may still find the need for more improvements in your pictures. In such cases Photoshop comes handy and it can be used to make changes in your images. You can make improvements like age progression, skin tone effect, change hair color etc. If you are familiar with Photoshop you can make these improvements very easily. Here are 20 excellent and most wanted Photoshop retouching tutorials to retouch your face and other body parts in Photoshop. I hope you like the Photoshop retouching tutorials, waiting for your comments. Tagged as: Tutorial

How to Design A Magazine Cover in Photoshop In this tutorial we will learn how to design a magazine cover in Photoshop. I usually design covers using Photoshop and InDesign, but for this tutorial we will be using Photoshop for everything. When you set out to design your own magazine cover you’ll need to pay close attention to details and carefully lay out the artistic aspect of it, working towards a well planned and complete artistic concept. Taking the time to formulate a strong concept is extremely important to the success of the magazine. I will take you through the process of creating a cover and reveal techniques that designers use to make their covers stand out. Final Image 30 Photoshop secrets to improve your skills Photoshop is an amazing bit of software that many designers use on a daily basis. It's such a flexible bit of kit that you could spend a week learning new features, and still have only scratched the surface of what's possible. Once you've overcome the beginners' learning curve, however, there are some real gems hidden inside Photoshop that can help you speed up your work and get more out for less effort. Here we've rounded up 30 of the best Photoshop secrets to help sharpen your skills and improve your productivity. See all our Photoshop articles here

How To Create a Realistic Money Effect in Photoshop The classic illustration style used on money is something I’ve always wanted to figure out how to replicate in Photoshop. There’s plenty of Photoshop tutorials that show how to create a basic halftone line effect, but they never quite capture that authentic engraved look with plenty of shading and tone. After lots of trial and error I finally managed to figure it out, so here’s an in depth tutorial on how to create a realistic money illustration effect in Photoshop (with some help from Illustrator!). The effect we’ll be creating in today’s tutorial is this vintage engraved or etched illustration style that builds up the tonal areas of an image with lots of tiny lines. Unlike the basic halftone line effect used in other tutorials, this method actually uses curved and wavy lines that vary in weight to produce an accurate replica of this classic illustration technique.

200++ Photoshop Photo Effects EmailEmail Have you ever wonder where is that photo effect tutorial you saw the other day and start searching all over the internet but couldn’t find what you saw initially? Honestly, i have. That is why i throw them all into this article instead. But i also use these article to gain inspiration on what to do with my photo image. Sometimes we are like a lost bird when it comes to creative design.

Making Complex Selections in Photoshop Making precise selections in Photoshop is an essential skill that every designer needs. As a print designer, you will find yourself using selections to remove objects from their background to place within ads. As a web designer, you might extract an image and place it on a website with no background. If you are a photographer, you might make a selection to remove blemishes or other unwanted features from an image. You can’t get around it; everyone uses selections, and if you make excellent selections, you’ll end up with excellent work.

Skin Retouching in Photoshop This tutorial will help you learn how to speed up skin retouching and polish photos in Photoshop using basic techniques. Original Photo Step 1 Duplicate the background image and rename it to Layer 1. Step 2 Photoshop Effects: recreate the look of a medium format portrait When I first got in to photography, which wasn't quite 100 years ago, there were three reasonably clear groups of camera user. The happy snappers used compacts, the enthusiasts used SLRs and the professionals used medium, or large, format. If you were a really 'serious' amateur, and every club had at least one of these Yodas, you might have got yourself a medium format system, using 6x4.5cm, 6x6cm or even 6x7cm frames of 120 roll film. How to create a simple texture background in 5 seconds inShare7 First fill the background: Add a new layer and make a noise and then duplicate the layer: Do motion blur on the first layer with the angle of 0 degrees, distance 40 pixels: Do the same thing with another layer and set 90 degrees:

15 Best Google Drive Add-Ons for Education Google Drive has enabled Google Add Ons and there are some that you and your students will want to enable right away. Others may appeal more to professional developers or those who work remotely . I have updated this post and also held a free webinar talking about my favorite Google Drive Add Ons. I’ve updated this post originally written in 2014 to reflect current information. 50 Portrait Retouching Tutorials To Take Your Photoshop Skills To A New Level Email Is it something that often happens to you? You just sit and keep on looking through your photos on the computer screen trying to take a closer look at your full-size pictures. And then it occurs to you that they didn’t really suck that much during the actual shoot? Of course, what you see during the shoot with your eyes and what you get after the photo session is not the same thing.

Tutorial: More Texturing- Photoshopcontest.com By: ledirlo This tutorial demonstrates an effect that gets so photorealistic it led to some cheating controversies in the past. Aside from the interest of the created effect it also gives key layer technique information. The only material needed is these two photos, the crumpled paper and what we want printed on it. Top Photoshop Tutorials on YouTube You Need to Watch We know how much are readers love great Photoshop tutorials. In this list we thought we would switch it up a bit and list some awesome Photoshop tutorials on video. While I prefer text and images when doing tutorials I know there are many people out there that would rather watch a video tutorial.