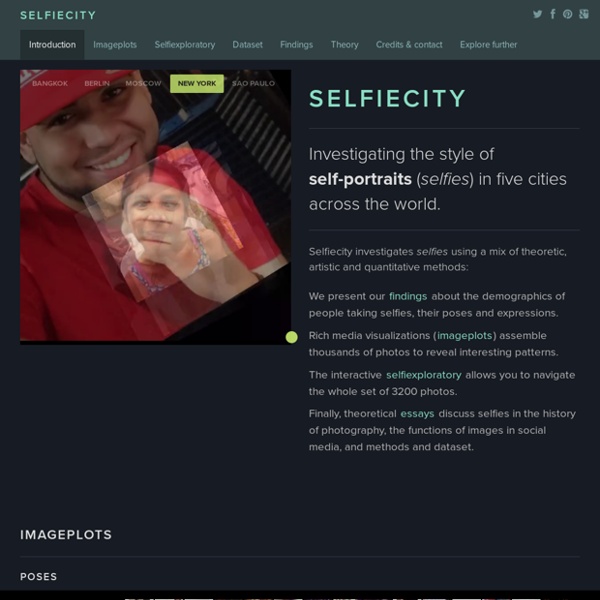 Data Visualization: Photo-Sharing Explosions This is a series of videos that visualizes a single piece of content being shared between hundreds of thousands of individuals on Facebook. We've tried to capture the frenetic energy surrounding three of the most shared images, all of which were photos published on George Takei's Page. Each visualization is made up of a series of branches starting from a single person.

Lesson Plan: How to use social media for social good Social media is an important tool for learning about current events and practicing active and informed citizenship. However, fake Twitter accounts called ‘bots’ have been used to try to influence public opinion—and not always for the better. About 30 percent of social media users have been deceived by a computer-generated bot at one point or another.

The Rational Keyboard The Rational Keyboard is a browser app to play with harmony on the rational number line. Imagine a piano with infinitely many keys, one for each rational number, and the keys move around and resize based on what sounds good, using some really cool math. Audio is synthesized in background Web Workers and played with HTML5 Audio objects, and the interactive visualizations use a 2D HTML5 Canvas. Check out the source at github, or just grab the audio encoder for your own apps. Audio seems to work best in recent Firefox and Chrome releases, but HTML5 audio is still a young technology. Sometimes pausing helps to unglitch audio.

Peter Kubelka's Arnulf Rainer: the film as a visualization Peter Kubelka with a wall Iinstallation of Arnulf Rainer (1960). Arnulf Rainer is a famous 1960 film by Austrian experimental filmmaker Peter Kubelka. The film consists only from black and white frames, organized in a strict system. Kubelka also presented the film as a wall installation, with film frames arranged in a sequential order (see the photo above). Normally when we visualize a film or a video, we have to go through a process of reduction: scaling frames to a small size (for instance, the visualizations by William Huber shows 22,500 frames sampled from a 62.5 hr videoof Kingdom Hearts gameplay) or using geometric forms such as bars to represent some visual properties of the shots (for instance, see my visualization sketches showing patterns in shot length in two films by Dziga Vertov). A visualization of shot lengths in The Eleventh Year (Dziga Vertov, 1928).

"Visualizing Vertov" - new article by Lev Manovich with 33 visualizations available for download All shots with close-ups of faces from The Eleventh Year (Dziga Vertov, 1928). The shots are arranged in the order of their apperance in the film, left to right, top to bottom. The article presents visualization analysis of the films The Eleventh Year (1928) and Man with a Movie Camera (1929) by the famous Russian filmmaker Dziga Vertov. One of the goals of the project is to show how various dimensions of films can be explored using special visualization techniques inspired by media and new media art, as well as the basic principle of cinema itself - editing (i.e., selecting and arranging together media elements). In some cases, we use digital image processing software to measure visual properties of every film frame, and then plot these measurements along with the selected frames. (For example, this approach allows us to visualize the amounts of movement in every shot in a film.)