5 Fundamental Skills Every Artist Should Master 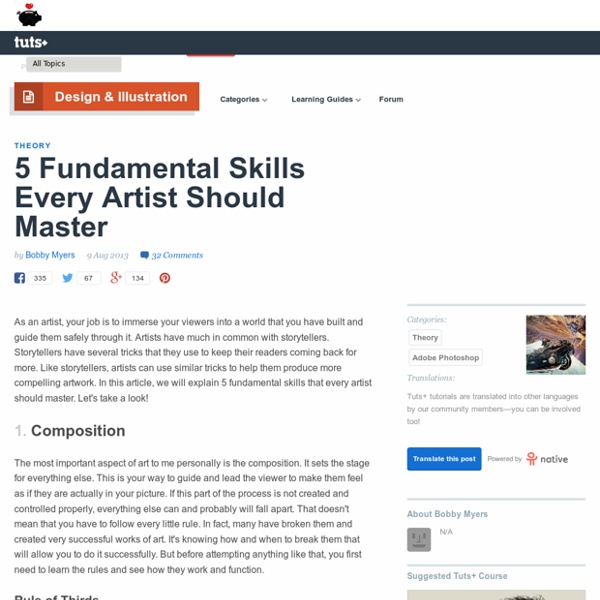 As an artist, your job is to immerse your viewers into a world that you have built and guide them safely through it. Artists have much in common with storytellers. Storytellers have several tricks that they use to keep their readers coming back for more. Like storytellers, artists can use similar tricks to help them produce more compelling artwork. In this article, we will explain 5 fundamental skills that every artist should master. Let's take a look! The most important aspect of art to me personally is the composition. This is the simplest and most used composition technique, one that I use a lot myself. The main idea behind this is to place your most important element/object on one of the intersections where the lines converge (the +'s), as well as along or near the vertical line of wherever your focal may lie. It is believed that when this is used and your subject/focal sits on one of these spots, it creates more interest in your picture rather than having it centered.

Columns / Harsh Mander : Barefoot - The other side of life LIFE-CHANGING EXPERIENCE: Matt (left) and Tushar. Photo courtesy: RS100ADAY.COM Can anyone really live on Rs. 26 a day, the income of the officially poor in rural India? Late last year, two young men decided to live a month of their lives on the income of an average poor Indian. The idea suddenly struck them one day. To begin with, what was the average income of an Indian? The young men moved into the tiny apartment of their domestic help, much to her bemusement. Living on Rs.100 made the circle of their life much smaller. However, the bigger challenge remained. For this, they decided to go to Matt's ancestral village Karucachal in Kerala, and live on Rs. 26. Yet, when their experiment ended with Deepavali, they wrote to their friends: “Wish we could tell you that we are happy to have our ‘normal' lives back. It disturbs us to spend money on most of the things that we now consider excesses. We don't know the answers to these questions.

The Man Who Wanted to Wed 500 Times Holder of world records for the most flags tattooed on his body, most straws stuffed in his mouth and longest non-stop scooter journey ever, Guinness Rishi explains his need to break and set new records In 1980, I was asked by my company to cover the length and breadth of India on a Luna 50 cc moped. I worked for an auto parts company, Novelty Auto Traders, and was asked to promote our products on the journey. I went pretty much everywhere I could, Leh-Ladakh-Kashmir to Kanyakumari. As this was before the age of the internet, I wasn’t sure where the eastern- and western-most tips of the country lay. Some journalists told me that this was the longest journey undertaken on a moped, possibly in the world. By 1983, however, the calls had stopped. My mind was made up by 1986: I would attempt the record for the longest non-stop scooter ride. This required plenty of preparation. By 1990, we were ready. We completed the task in 42 days and 42 nights—30,965 km in 1,001 hours. It hurts me.

List of Old Doordarshan TV shows and Serials - AbhiSays.com The 80s was the era of Doordarshan with soaps like Hum Log, Buniyaad and comedy shows like Yeh Jo Hai Zindagi which made Doordarshan a household name. Circus, Gul Gulshan Gulfam and Nukkad are some of the serials that come instantly to my mind when I think of the good old days of Doordarshan. Those were phenomenal days when people gathered in crowds to watch the telecast of these serials. The characters of Ramayan and Mahabharat were almost worshiped like God and Goddess throughout the country. Other popular programs included Hindi film songs based programs like Chitrahaar and Rangoli and crime thrillers like Karamchand, Byomkesh Bakshi, Tehkikaat and Janki Jasoos. This is the big list of Old Doordarshan TV shows and serials. Vote for best Doordarshan Serial of old times Watch this Doordarshan old clips (duration : 2 hours) Dear friends, You can buy some of these serials from Flipkart.com. To buy Doordarshan serials, visit Thanks, Abhishek Kumar

An Open Letter To Prospective Indian Employer « Random Thoughts of a Demented Mind NYTimes India Ink carries a lot of nice things. Sometimes though, it does not. As an example, this hectoring “An Open Letter to India’s Graduate Classes” delivered from a position of moral, ethical and overall-I-am-awesome-and-you-are-not superiority. Dear Prospective Indian employer, This is your prospective/current employee. Life is good—except that it’s not. Today, we regret to inform you that you are spoiled. So why this letter, and why should you read on, seeing that I am making gross generalizations about “Indian employers”, affixing stereotypical labels on a heterogeneous group. Well, because based on collective experience of working for Indian employers, some truths have become apparent. There are five key attributes Indian employees typically seek and, in fact, will value more and more in the future. 1. A rather basic requirement really. 2. Another rather basic requirement isnt it? 3. If you want to have your employees be original, encourage that activity. 4. Dogs get trained.

War of Currents In the War of Currents era (sometimes, War of the Currents or Battle of Currents) in the late 1880s, George Westinghouse and Thomas Edison became adversaries due to Edison's promotion of direct current (DC) for electric power distribution over alternating current (AC). Thomas Edison, American inventor and businessman, known as "The Wizard of Menlo Park", pushed for the development of a DC power network. George Westinghouse, American entrepreneur and engineer, financially backed the development of a practical AC power network. Edison's direct-current system generated and distributed electric power at the same voltage as used by the customer's lamps and motors. This meant that the current in transmission was relatively large, and so heavy conductors were required and transmission distances were limited, to about a mile (kilometre); otherwise transmission losses would make the system uneconomical. At the time, no method was practical for changing voltages of DC power. DC[edit] AC[edit]

Old Indian Photos Microsoft Pulls Prank / Company takes browser war to Netscape's lawn Microsoft pulled an early- morning prank straight out of the frat comedy "Animal House" on rival Netscape Communications yesterday. But Mountain View-based Netscape quickly exacted its own "Revenge of the Nerds." The high jinks started about 1 a.m., when a team of Microsoft engineers placed a car-size logo for Internet Explorer (a giant "e") on the front lawn of Netscape's headquarters. Hours earlier at Fort Mason, Microsoft had released Explorer 4.0, the next version of its browser. A browser is software that finds and displays Web pages. The Explorer team also left a greeting card with the picture of a grumpy baby with the note: "It's just not fair. About the only thing missing were strips of toilet paper on Netscape's front lawn. "It was all done in the name of fun," a Microsoft spokeswoman said. Some officials at Netscape, which competes against Microsoft with its Navigator browser, weren't laughing. That didn't stop Netscape employees from retaliating.

Ico The protagonist is a young boy named Ico who was born with horns, which his village considers a bad omen. Warriors lock him away in an abandoned fortress. During his explorations of the fortress, Ico encounters Yorda, the daughter of the castle's Queen. Gameplay[edit] Ico (right) calls out to Yorda (left) while she waits on the ruined castle. Escaping the castle is made difficult by shadow creatures sent by the Queen. Plot[edit] Ico (イコ, pronounced "Ee-ko"?) Ico awakens below the castle and makes his way back to the upper levels, finding a magic sword that dispels the shadow creatures. Development[edit] The cover used for the North American release of Ico. The cover used for releases in Japan and PAL regions was drawn by Ueda himself, and was inspired by the surrealist artist Giorgio de Chirico and his work, The Nostalgia of the Infinite. Other media[edit] Novelization[edit] A novelization of the game titled Ico: Kiri no Shiro (ICO-霧の城-, Iko: Kiri no Shiro? Soundtrack[edit] Reception[edit]

Coursera UPDATE: we're doing a live, updated MOOC of this course at stanford-online July-2014 (not this Coursera version). See here: CS101 teaches the essential ideas of Computer Science for a zero-prior-experience audience. Computers can appear very complicated, but in reality, computers work within just a few, simple patterns. CS101 demystifies and brings those patterns to life, which is useful for anyone using computers today. In CS101, students play and experiment with short bits of "computer code" to bring to life to the power and limitations of computers. Here is another video Nick created for this class.

The 100 best games of all time 1. Dark Souls Dark Souls nudging out a Zelda game? Yes. From Software's masterpiece evolves, extrapolates, and elevates Link's loose template into something grander and truly, deeply mature. And ye gods, its narrative. Buy it on Amazon