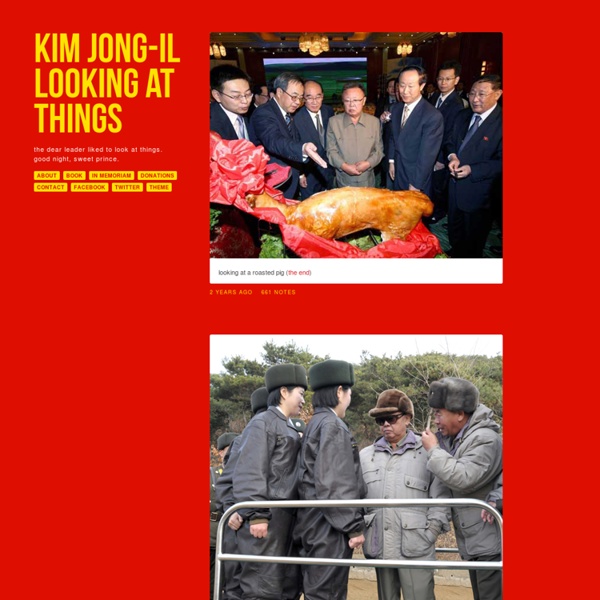 Baguette-me-nots Baguetting photos taken by Tim Bierbaum and John Milhiser from Serious Lunch Baguette-me-nots Paul Feig 3:09 pm • 6 September 2013 • 114 notes Bob Officer silicon ally (Source: pale-est-bitches, via kazukij) (via substvncia) pjmix: Run Run まこと (via TOPIT.ME) | archive the original joe fisher. the original joe fisher. I'm a writer living in Los Angeles. But who isn't? I'm in awe of people who make art and photography. Since I know I'll never excel past stick figures I like to post other people's art and sometimes write about it. as pretty as a picture as pretty as a picture // Ask // (Source: sc0rpio, via nrrrd) My Daguerreotype Boyfriend Horace Hopkins Coolidge, age 22, on his graduation from Harvard College, class of 1852. (Harvard Archives) Among the many gifts his fairy godmother endowed on Horace Coolidge were a genial charm of manner, a rare tenderness and a spirit of living kindness, and a loyalty in friendship which made him dearly loved by all who knew him. After graduating, he did what many young men of his time did, and traveled to Egypt for two years, returning to Boston to marry his sweetheart and become a lawyer.

North Korea Puts Its War Machine on Display - In Focus Despite massive international pressure, North Korea has been moving ahead with its long-range missile and nuclear ambitions, launching a rocket in December and conducting a nuclear test in February. International sanctions tightened in response, and even China, a longtime ally, stepped up inspections of North Korea-bound freight. Responding to the crackdown, North Korea's government has been issuing new threats of war nearly every day over the past month, cutting ties to South Korea and ordering military units to prepare for attack at any moment. Over the past month, the Korean Central News Agency (KCNA), North Korea's official media division, has been issuing a stream of images of military exercises, soldiers in training, and, of course, supreme leader Kim Jong Un inspecting and inspiring the troops. (At least one of these images appears to be digitally manipulated).

CONSTANT SIEGE The lesson we can all learn from pandas: if you’re gonna be dumb, you’d better be cute. April Fools’ Day was made irrelevant when we invented the Internet and switched to 24/7 International Fools’ Time. Each prison built is a temple to the failure of a society. CRAPPY TAXIDERMY Since 2009, Crappy Taxidermy has been the Internet's largest image gallery of crappy and awesome taxidermy.We are pleased to announce that we are working with Octopus Books and Cassell Illustrated to bring the Crappy Taxidermy blog to book format in Autumn 2014. :) Get in touch: crappytaxidermy@gmail.com (no hate mail pls)

The 25 Funniest Autocorrects Of DYAC’s First Year To celebrate Damn You Autocorrect’s 1-year anniversary online, we compiled the Top 50 Fan Favorite DYAC entries (as determined by Facebook shares, tweets, comments, and pageviews). And now… here are the top 25 entries! Enjoy – and keep all the great submissions coming! 25. Special Delivery