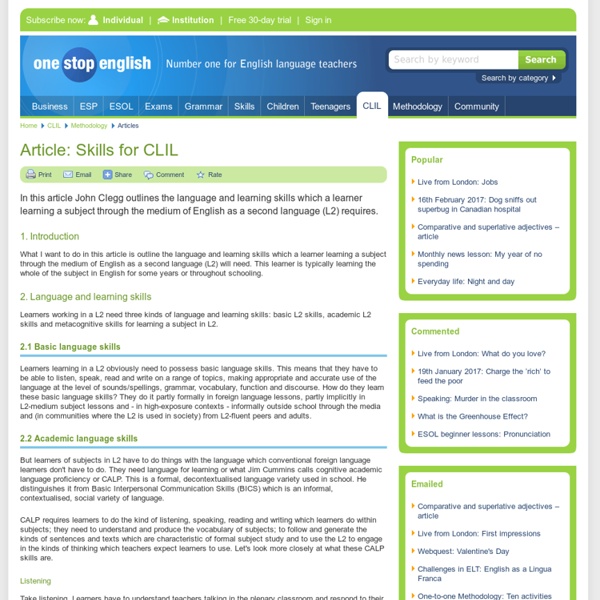 Clilstore - Teaching units for content and language integrated learning Teaching unitsfor Content and Language Integrated Learning HelpAbout Select the language you are learning and your level to see the available units. Level AnyBasicA1A2B1B2C1C2Advanced This project has been funded with support from the European Commission. Disclaimer: This publication reflects the views only of the author, and the Commission cannot be held responsible for any use which may be made of the information contained therein. CLILingmesoftly | The practice and theory of CLIL BICS and CALP explained              J. Cummins  Bilingual Education Web i teach i learn.com Jim Cummins Homeresources contact Jim Cummins University of Toronto The acronyms BICS and CALP refer to a distinction introduced by Cummins (1979) between basic interpersonal communicative skills and cognitive academic language proficiency. Skutnabb-Kangas and Toukomaa (1976) brought attention to the fact that Finnish immigrant children in Sweden often appeared to educators to be fluent in both Finnish and Swedish but still showed levels of verbal academic performance in both languages considerably below grade/age expectations. The distinction was elaborated into two intersecting continua (Cummins, 1981b) which highlighted the range of cognitive demands and contextual support involved in particular language tasks or activities (context-embedded/context-reduced, cognitively undemanding/cognitively demanding). The major criticisms are as follows: References Biber, D. (1986) Spoken and written textual dimensions in English: Resolving the contradictory findings. Collier, V.

CLIL: A lesson framework Underlying principles Classroom principles Lesson framework Conclusion Underlying principles The principles behind Content and Language Integrated Learning include global statements such as 'all teachers are teachers of language' (The Bullock Report - A Language for Life, 1975) to the wide-ranging advantages of cross-curricular bilingual teaching in statements from the Content and Language Integrated Project (CLIP). The benefits of CLIL may be seen in terms of cultural awareness, internationalisation, language competence, preparation for both study and working life, and increased motivation. While CLIL may be the best-fit methodology for language teaching and learning in a multilingual Europe, the literature suggests that there remains a dearth of CLIL-type materials, and a lack of teacher training programmes to prepare both language and subject teachers for CLIL teaching. Classroom principles Some of the basic principles of CLIL are that in the CLIL classroom:

Give CLIL time Rosie Tanner and Liz Dale are Content and Language Integrated Learning (CLIL) consultants and teacher trainers based in the Netherlands. They are the authors of CLIL Activities: A resource book for subject and language teachers. In today’s post, Rosie and Liz look at the value of ‘slowing down’ in the classroom, in the context of CLIL. A personal resolution of ours recently is (yet again) to slow down. This video, “Creativity requires time” caught our attention, because it shows that slowing down actually can help creativity. But what does this mean for Content and Language Integrated Learning (CLIL)? Instead of requiring students to write short paragraphs or answers to questions, work on one, longer piece of writing over a number of lessons (plus homework), in order to develop their writing skills. Alternatively, you can use the well-worn idea of Think > Pair > Share (TPS). Use HOTS (higher order thinking skills) more than LOTS (lower order thinking skills).

Article: Planning CLIL lessons By John Clegg To overcome the language barrier, CLIL teachers need to plan their lessons to include language support as well as content teaching. John Clegg explores the strategies that can be applied. Teaching in L1 If you teach a subject in the first language (L1) of your learners – or in a language in which they are fluent – there are some things which you normally feel you can count on. I’ll mention two: basic language ability and academic language proficiency. a) Basic language ability Most teachers feel they can count on their learners being able to use the language of learning; in other words that they can talk without struggling with vocabulary and syntax; that they can listen with reasonable understanding to people talking at some length about a topic; and that can read and write at least at a minimally skilled level. If you teach your subject in a second language (L2), you know that you normally can’t count on these things. b) Academic language proficiency Teaching in L2

What is CLIL? Defining CLIL Content and Language Integrated Learning is an umbrella term which encompasses any activity in which a foreign language is used as a tool in the learning of a nonlanguage subject, where both language and subject have a joint role (Marsh 2002:58).The adoption of a specific term was a move towards defining more clearly the nature of CLIL midst a plethora of related approaches such as content-based instruction, immersion, bilingual education and so on. Whilst CLIL shares certain aspects of learning and teaching with these, in essence it operates along a continuum of the foreign language and the non-language content without specifying the importance of one over another. In the CLIL Compendium there are 5 dimensions based on issues relating to culture, environment, language content and learning. Each of these includes a number of focus points realized differently according to 3 major factors: age-range of learners, socio-linguistic environment, and degree of exposure to CLIL. 1.

CLIL – a difficult challenge? | CLILingmesoftly CLIL – a difficult challenge? David Graddol, the author of English Next, has said of CLIL: ‘there is a potentially large downside to it. In many countries they just don’t seem to be equipped to implement CLIL. When it works, it works extraordinarily well, but it is actually quite difficult to do well. Graddol, D IATEFL CLIL debate, Cardiff, Other researchers, though, have expressed concern about CLIL, suggesting, for example, that learning subjects in L1 rather than L2 produces better exam results, greater progress in subject learning, better learner self-perception and self-esteem and greater classroom participation. Spratt, Mary, The Nature of the beast, Issue 72 January 2011 • ENGLISH TEACHING professional, 6 Are these concerns justified and what exactly are the quality features of CLIL that may take countries 30 to 40 years to satisfyingly implement them? Like this: Like Loading... About erwingierlinger I am a teacher trainer at the University of Education of Upper-Austria in Austria

Met - Content-based Instruction Content-based Instruction: Defining Terms, Making Decisions Myriam Met Montgomery County Public Schools he integration of language and content instruction has been a growing phenomenon in the language field since the early 1980s. The term content-based instruction is commonly used to describe approaches to integrating language and content instruction, but it is not always used in the same way. There is also a variety of definitions of “content.” Despite differences in how terms are defined, the diverse characteristics of programs that integrate content and language can be used to determine their position on a continuum that illustrates the relative role of content and language. All of the programs, models, and approaches that integrate language and content share a common phenomenon: students engage in some way with content using a non-native language. Figure 1 The continuum provides for a range of programs and approaches that may be primarily content-driven or language driven. Figure 2