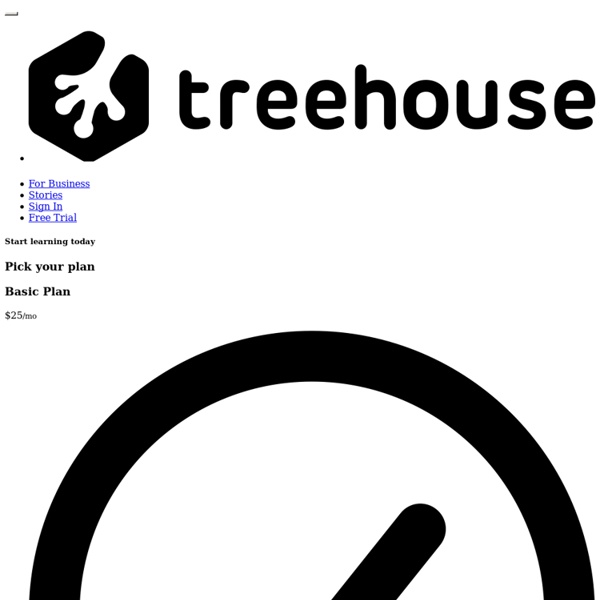 Success is in the air […] I am so thankful that Treehouse has allowed me to get started and follow something that I'm truly passionate about. Jon Farrell Sydney Australia Watching the Treehouse videos, I was having little “Ahaaa, that makes sense!” moments, the videos are broken down into just the right amount to be able to absorb, without getting too frustrated. Toby Powell Bangkok, Thailand I'm starting a business based on the web, and that's huge to me. I am attributing this to Treehouse because it gave me the skills under my belt, and the confidence to start my own business. Treehouse not only provided a great learning foundation for what I do on a daily basis… I now have friends across the globe, who I would never have met had it not been for Treehouse.

Anonymous P2P Interest in anonymous P2P systems has increased in recent years for many reasons, ranging from the desire to share files without revealing one's network identity and risking litigation[1] to distrust in governments, concerns over mass surveillance and data retention, and lawsuits against bloggers.[2] Motivation for anonymity[edit] There are many reasons to use anonymous P2P technology; most of them are generic to all forms of online anonymity. P2P users who desire anonymity usually do so as they do not wish to be identified as a publisher (sender), or reader (receiver), of information.

A Comprehensive Website Planning Guide As a veteran designer, developer and project manager for more websites than I can count, I’ve identified a common problem with many Web projects: failure to plan. The same issues come up repeatedly in my work, so I’ve written this guide in order to help clients, other designers, businesses and organizations plan and realize successful websites. This guide is written in relatively non-technical language and provides a broad overview of the process of developing a website, from the initial needs assessment through the launch, maintenance and follow-up. It is appropriate for: Small and medium-sized businesses;Organizations;Institutions;Web designers, developers, and design and development firms.

Capturing Audio & Video in HTML5 Introduction Audio/Video capture has been the "Holy Grail" of web development for a long time. For many years we've had to rely on browser plugins (Flash or Silverlight) to get the job done. Come on! HTML5 to the rescue. It might not be apparent, but the rise of HTML5 has brought a surge of access to device hardware. Introduction to ES2015 Have you ever tried reading the source code of a newer JavaScript app or module? For example, try understanding the following code: If you look at it carefully, it's pretty. Music visualization Screenshot of preset included in MilkDrop, a PC based music visualization software (version 1.04d, 2001) Visualization techniques range from simple ones (e.g., a simulation of an oscilloscope display) to elaborate ones, which often include a plurality of composited effects. The changes in the music's loudness and frequency spectrum are among the properties used as input to the visualization. Definition[edit] History[edit]

The Process of Designing and Building a Website in 2014 The Process of Designing and Building a Website For some individuals, working in the web industry is maddening -- for others, wonderful -- because of its ever-changing nature. Even for the most advanced and prolific designers and developers, keeping up with the web's advancements can be daunting. What has stayed true through each trend and movement, despite the many transformations and evolutions it has gone through, is the web's nature of being open and accessible. To this day, creating and sharing information is at the core of what the web is. So in this day and age, what is the process of making a website?

What is Firebug? : Firebug Firebug integrates with Firefox to put a wealth of web development tools at your fingertips while you browse. You can edit, debug, and monitor CSS, HTML, and JavaScript live in any web page Always at your service Firebug is always just a keystroke away, but it never gets in your way. You can open Firebug in a separate window, or as a bar at the bottom of your browser. Diceware Passphrase Home This page offers a better way to create a strong, yet easy to remember passphrase for use with encryption and security programs. Weak passwords and passphrases are one of the most common flaws in computer security. Take a few minutes and learn how to do it right.

Best Blogs on UX Design - Springboard Blog So you want to learn UX design. You’re in luck. The internet is replete with blogs by designers and industry experts that can help you with whatever you need: whether it’s staying up-to-date on trends, developing research methods, or getting inspired. We rounded up nine of the best blogs you should follow if you’re an aspiring UX designer — check them out below. Node.js Node.js is an open source, cross-platform runtime environment for server-side and networking applications. Node.js applications are written in JavaScript, and can be run within the Node.js runtime on OS X, Microsoft Windows, Linux, FreeBSD, NonStop and IBM i. Node.js provides an event-driven architecture and a non-blocking I/O API that optimizes an application's throughput and scalability. These technologies are commonly used for real-time web applications.

Edward Snowden Explains How To Reclaim Your Privacy LAST MONTH, I met Edward Snowden in a hotel in central Moscow, just blocks away from Red Square. It was the first time we’d met in person; he first emailed me nearly two years earlier, and we eventually created an encrypted channel to journalists Laura Poitras and Glenn Greenwald, to whom Snowden would disclose overreaching mass surveillance by the National Security Agency and its British equivalent, GCHQ. This time around, Snowden’s anonymity was gone; the world knew who he was, much of what he’d leaked, and that he’d been living in exile in Moscow, where he’s been stranded ever since the State Department canceled his passport while he was en route to Latin America. His situation was more stable, the threats against him a bit easier to predict. So I approached my 2015 Snowden meeting with less paranoia than was warranted in 2013, and with a little more attention to physical security, since this time our communications would not be confined to the internet. Eventually, Snowden appeared.

Designing User Interfaces for Older Adults: Myth Busters Note—For examples of other guidelines, see Chisnell and Redish’s “AARP Audience-Centered Heuristics: Older Adults,”PDF Kurniawan and Zaphiris’s “Research-Derived Web Design Guidelines for Older People, and NIH’s “Making Your Website Senior Friendly.” It could be, as argued by Richards in “Web Accessibility as a Side Effect,” that Web sites are more accessible in general, as a result of developments in “Web technology and associated shifts in the way Web pages are designed and coded.” But one doesn’t have to evaluate very many Web sites to realize that design that exhibits good general usability is more the exception than the rule. And, all other factors being equal—for example, computer expertise and education—older people suffer the effects of poor usability to a greater degree than younger people do.