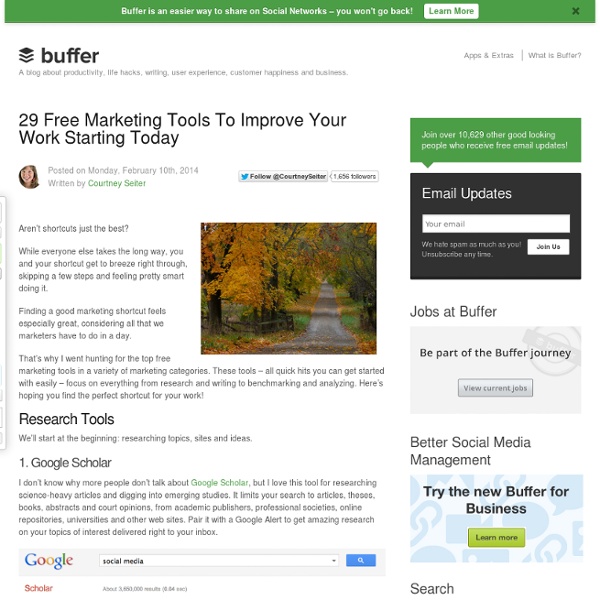 4.7K Flares Filament.io 4.7K Flares × Aren’t shortcuts just the best? While everyone else takes the long way, you and your shortcut get to breeze right through, skipping a few steps and feeling pretty smart doing it. Finding a good marketing shortcut feels especially great, considering all that we marketers have to do in a day. That’s why I went hunting for the top free marketing tools in a variety of marketing categories. Research Tools We’ll start at the beginning: researching topics, sites and ideas. 1. I don’t know why more people don’t talk about Google Scholar, but I love this tool for researching science-heavy articles and digging into emerging studies. 2. Described as a search engine for links, Open Site Explorer allows you to see a list of the sites that are linking to you – or another site. 3. See what the world is searching for and how interest in concepts has changed over time with Google Trends. Ideation Tools 4. Stumped for ideas? Not bad, huh? 5. Reading and Writing Tools 6.

Author Rank | A central place to learn everything about Virante's Author Rank OpenX launches the first global exchange for real-time bidding on native mobile advertising 26 February '14, 06:00am Follow Ad tech leader OpenX today announced Native O|X, a new ad exchange with an unprecedented combination of several of the most popular trends in the industry: mobile-first, real-time bidding and native advertising. While the new offering might sound like a pile of buzzwords to those outside the advertising space, Native O|X represents a natural next step for OpenX and the industry. The firm helped pioneer the rise of real-time bidding and programmatic advertising, which relies on software algorithms to automate the buying and selling of ad inventory. With its rich media and video content, Native O|X should result in a better overall ad experience on mobile for us consumers. “The 320×50 banners that are cemented in mobile sites and apps are not that effective…What publishers are telling us is that those units just don’t perform well,” Rob Kramer, OpenX’s general manager for mobile, said in an interview.

SoulPancake 10 Important Google URLs That Every Google User Should Know Which websites and apps have background access to my Google account? What does Google know about me? Where can I see all the ads that I’ve clicked on Google search? What does Google know about the places I’ve visited recently? Here are some of the most important links that every Google user should know about. 1. 2. 3. 4. 5. 6. 7. 8. 9. 10. Bonus: For Google Apps Administrators This is important but undocumented URL for Google Apps users. When You Fly, Beck's New Album Is Free How's this for in-flight entertainment? Singer-songwriter Beck, who gained worldwide fame in 1994 with his mellow hit single "Loser," will stream his new album at no cost to airplane passengers using Gogo Inflight Internet starting Monday. Capitol Records and Gogo told Mashable that Beck's album Morning Phase, which goes on sale Tuesday and marks his first in six years, will be free to stream for 30 days. The album's early availability on Monday as a stream on Gogo's homepage means people in the skies will get to hear Morning Phase before it's even offered on the ground. The unconventional release follows a string of elaborate album unveilings. The unconventional release follows a string of elaborate album unveilings. Earlier this year, for example, CBS.com debuted Bruce Springsteen's High Hopes album more than a week before its wide release, as part of a promotion for CBS show The Good Wife. Have something to add to this story? BONUS: 20 Songs Turning 20 in 2014

Never Run Out of Content Creation Ideas with These 8 Research Tools by Vertical Measures You have the best intentions when it comes to your content marketing strategy, yet you find it tough to produce enough content to fulfill your goals. Does this problem sound familiar? Maybe because it is…content creation is one the biggest challenges that companies face, whether they’re big or small. According to a joint Content Marketing Institute and MarketingProfs study, over half of enterprise businesses and a whopping 64% of small businesses say that creating enough content is the main challenge they face. We all know that the more content we produce, the more opportunity we have to be found in search engines. Though it seems daunting, I promise it’s not. Let’s use the example that I’m a hotel in Napa Valley looking to target brides-to-be’s planning their weddings through my content marketing. When in Doubt, Google It You’re aiming to have your content found on Google, so why not use the tools inherent to the platform? Don’t Forget About YouTube Delve into Yahoo Answers Quora

How to use the New Flickr for Search Within hours of the announcement of Yahoo!'s blockbuster purchase of Tumblr for $1.1 billion, they made another bold announcement that probably made a lot more users happy. Flickr, one of the most popular web services for sharing, storing and organizing photos, just got bigger and better. What's New First, the entire site has received a beautiful overhaul. The new interface puts even more emphasis on great images and keeps the site controls and information in the trending flat colors and graphics. Second, every user has received an upgraded account to a full terabyte of storage space, and images are stored in full resolution. There are also some changes to paid accounts, namely, a new structure and pricing for Pro accounts. Using Flickr The new Flickr Home features the most recent images from your contacts in a large left column. Click on You in the top menu, and you'll see your new profile page and photostream. Photo Search Make sure that you always give credit to the image owner.

A guide to getting everlasting traffic with keyword research Denis Duvauchelle is CEO and co-founder of Twoodo, helping your team organize itself using simple #hashtags. When you look at any of the thought leaders in marketing and copywriting, read any top keyword research guide (from Hubspot, Copyblogger, Moz) they will all tell you the same thing: You gotta get your keyword research right. What will keyword research impact on? SEOSEMsocial media activitycustomer discoverygetting the right people into the funnelbranding Why? Language links to identity. We are a team collaboration tool. Language is a tool you can use to build data about your ideal users, where they are, how to find them and how to attract them. People identify with the things they use – here are some amazing survey results about iPhones, Androids and Blackberry users: iPhone users are quite vain and travel moreAndroid users are good cooks, work longer hours and drink moreBlackberry users are richer and eat out the most These companies got their language right. Next: Step-by-step guide

Social SEO: The importance of social signals for your SEO – Part 1 There are more than 200 ranking factors that affect –directly or indirectly- your rankings on search engines. Epigrammatically, some of these factors are the keywords in URLs, the title tags, the heading tags (the keywords that are included within the <h1><h2>etc.), the quality of the content (in other words, the fresh quality content within a website), the anchor text, the keyword density, the overoptimization, the level of keyword stuffing, (if you have) duplicate content, the quality of backlinks, the time spent on a website, the website architecture, are just some the 200 factors, or more that have an effect on your site’s rankings. All these factors ideally combined together can bring you optimal results. How do social signals work? In a very simplified way, this is how they work: Within the above factors it is important to highlight the fact that all the above social networks are interlinked… In simple words this is how it works: Onsite Optimization