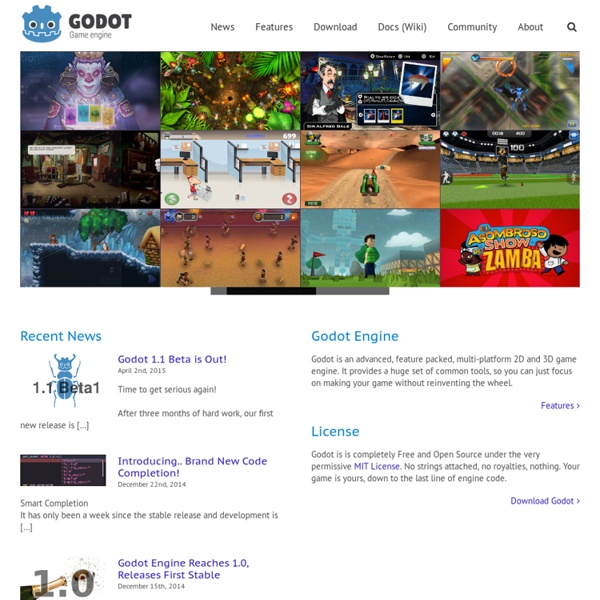 ShiVa 1.9.2 - Cross Platform Game Development How to Create Your Own Git Server Although I'm a happy (also paying) user of GitHub's offerings, there are times when I prefer to host a private repository on a server I control. Setting up your own Git server can be useful if you're isolated from the public internet, if you're subject to inflexible regulations, or if you simply want features different from those offered by GitHub (and other similar providers). Setting up a Git server on a Unix (Linux, Mac OS X, *BSD, Solaris, AIX) machine isn't difficult, but there are many details to observe. Here is a complete guide. Through the following steps you can setup and use your own Git server at a server, say myhost.example.com. Create a group for those who will have read/write access to the repository. Read and post comments

famo.us GitStats - git history statistics generator Nurgak/Cube-engine SweetFX Shader Suite release and discussion thread This is the official release thread for SweetFX. Current version is 1.3 You can download it here on Guru3D's mirrors, or on dropcanvas. It's also on Skyrim nexus (where you can also find older versions). On Dropcanvas you can also find versions of my shaders that will work with Media Player Classic so you can use them to improve movie watching as well. I'll be posting new releases here and you can discuss SweetFX and share settings here too (use the code tag and optionally the spoiler tag when posting settings). News and links There is a great SweetFX Borderlands 2 specific guide on youtube by TheAdipose. Part One - what is sweetfx? And over in the overclock.net forums, the moderator TFL_Replica have also posted tons of screenshots and it's also a good place for support if no one here was able to help you. Also youtuber Quicksh0tHD did a interview with me. Terrasque have made a GUI tool that makes it easier to install and configure SweetFX. What is it? Effects included:

gladiusjs/gladius Polygonal Map Generation for Games I wanted to generate interesting game maps that weren’t constrained to be realistic, and I wanted to try some techniques I hadn’t tried before. I usually make tile maps but instead used a different structure. What could I do with 1,000 polygons instead of 1,000,000 tiles? The distinct player-recognizable areas might be useful for gameplay: locations of towns, places to quest, territory to conquer or settle, landmarks, pathfinding waypoints, difficulty zones, etc. I generated maps with polygons, then rasterized them into tile maps that looked like this: Most procedural map generators, including some of my own previous projects, use noise functions (midpoint displacement, fractal, diamond-square, perlin noise, etc.) to generate a height map. There were three main things I wanted for this project: good coastlines, mountains, and rivers. First, try the demo! Every project will have its own gameplay constraints. Polygons The first step is to generate some polygons. Map Representation Islands