XML Introduction - What is XML? 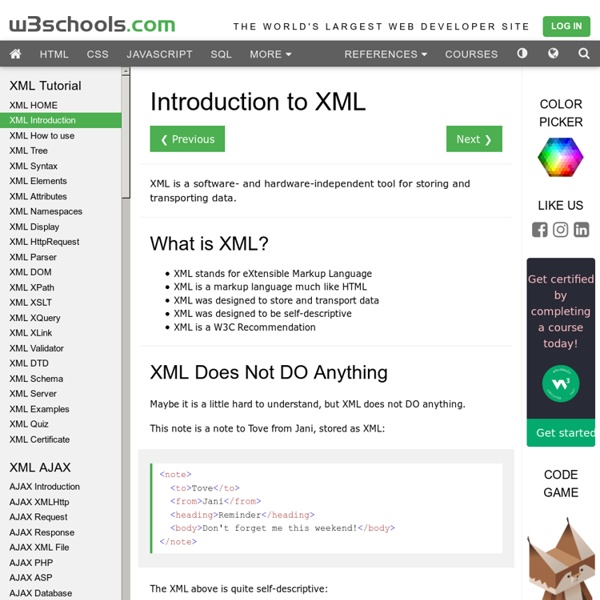 ConceptNet | Common Sense Computing Initiative ConceptNet aims to give computers access to common-sense knowledge , the kind of information that ordinary people know but usually leave unstated. The data in ConceptNet is being collected from ordinary people who contributed it on sites like Open Mind Common Sense . ConceptNet represents this data in the form of a semantic network, and makes it available to be used in natural language processing and intelligent user interfaces. ConceptNet is an open source project, with a Python implementation and a REST API that anyone can use to add computational common sense to their own project. Some of the nodes and links in ConceptNet. Places to go next ConceptNet Development Team Current developers Project alumni Papers Papers about ConceptNet itself Havasi, C., Speer, R. & Alonso, J. (2007) ConceptNet 3: a Flexible, Multilingual Semantic Network for Common Sense Knowledge. Liu, H. & Singh, P. (2004) ConceptNet: A Practical Commonsense Reasoning Toolkit. Liu, H. & Singh, P. (2004).

Understanding Web Technologies 07 June 2010 Posted in Project Planning & Management The following is an excerpt from our Web Designer Certification Program. If you want to become a Dev Department Certified Web Designer, you can register for free here. There is a vast range of technologies available to today's web developer, and it is very easy to become bogged down in trying to understand and accommodate sales and markets for each. Web Technologies: HTML/XHTML and CSS As previously mentioned, HTML and CSS are the technologies used to assemble a design into a functional web page. CSS allows for the very specific positioning and formatting of web page content and also allows the programmer to quickly change styles for an entire site within a single file. A style-sheet is referenced in the HEAD section of every HTML page to which it applies and several style-sheets can be referenced for each page of a site. Style-sheets use a process known as inheritance to override previously defined styles.

Text Encoding Initiative Official logo The Text Encoding Initiative (TEI) is a text-centric community of practice in the academic field of digital humanities, operating continuously since the 1980s. The community currently runs a mailing list, meetings and conference series, and maintains an eponymous technical standard, a wiki, a SourceForge repository and a toolchain. The TEI Guidelines[edit] The TEI Guidelines, which collectively define an XML format, are the defining output of the community of practice. Technical Details[edit] The standard is split into two parts, a discursive textual description with extended examples and discussion and set of tag-by-tag definitions. A number of special tags are used to circumvent restrictions imposed by the underlying Unicode; glyph to allow representation of characters that don't qualify for Unicode inclusion[6] and choice to allow overcome the required strict linearity.[7] TEI Lite is an XML-based file format for exchanging texts. Examples[edit] Prose tags[edit] Verse[edit]

HTML Responsive Web Common Sense Computing Initiative | at the MIT Media Lab Years ago, we made a decision to put all our Python packages in a common namespace called csc . To put it simply, this did not work well. Today, we have finally undone this decision by deprecating the csc namespace and renaming every single one of our modules. Python programmers, please learn from our mistake and never make a namespace package. If you upgrade our software, you'll get more straightforward names for our modules. The new names to import are: csc.conceptnet → conceptnet csc.divisi2 → divisi2 csc.nl → simplenlp csc.util → csc_utils csc.corpus → conceptnet.corpus csc.lib → conceptnet.lib csc.django_settings → conceptnet.django_settings csc.pseudo_auth → conceptnet.pseudo_auth csc.webapi → conceptnet.webapi There's still a package called csc , and basically what it's there for is to make your old code keep working. Read on for more details, including how to update your installation.

How can I learn the basics of web development and server management Digital Initiatives How does the Internet work? - HowStuffWorks Even though the Internet is still a young technology, it's hard to imagine life without it now. Every year, engineers create more devices to integrate with the Internet. This network of networks crisscrosses the globe and even extends into space. To understand the Internet, it helps to look at it as a system with two main components. Other types of hardware that support the Internet include routers, servers, cell phone towers, satellites, radios, smartphones and other devices. These elements are connections. All of this hardware wouldn't create a network without the second component of the Internet: the protocols. We'll take a closer look at protocols and how information travels across the Internet on the next page.

Folksonomies - Cooperative Classification and Communication Through Shared Metadata The Creation of Metadata: Professionals, Content Creators, Users Metadata is often characterized as “data about data.” Metadata is information, often highly structured, about documents, books, articles, photographs, or other items that is designed to support specific functions. These functions are usually to facilitate some organization and access of information. Administrative, structural, and descriptive metadata are three broad categories of metadata (Taylor, 2004). This paper focus primarily on descriptive metadata which identifies and functions to organize information based on its intellectual content. Traditionally metadata is created by dedicated professionals. While professionally created metadata are often considered of high quality, it is costly in terms of time and effort to produce. User created metadata is a third approach, and this paper focuses on grassroots community classification of digital assets. Tagging Content in Del.icio.us and Flickr “a social bookmarks manager.