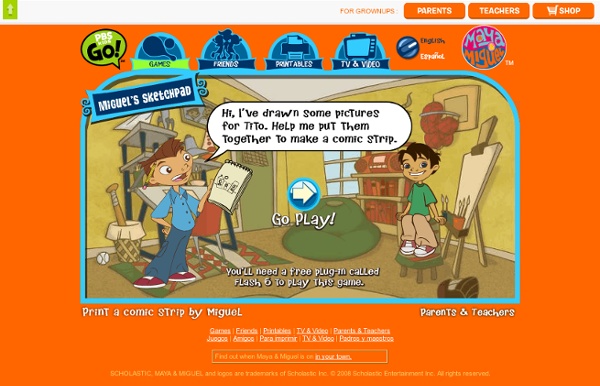 Games . Comic Creator Funded by: Come play again later! Come play again tomorrow! Create a new strip You are using an ancient web browser, Stripgenerator does not work properly in it.Get rid of Internet Explorer 6! Upgrade to a new version or use another browser like Chrome, Opera, Safari or Firefox. StripGenerator Say hello to manoli_martin 384,903 Members 1,063,946 Strips Creating ToonDoo Cartoons Creating Your First ToonDoo Here is a simple ToonDoo. With the information on this page, you will be able to create this cartoon, or a similar cartoon of your own.

BAM, Your Life, Kabam! Comics Help the Bam! Bunch through the day... Give the best advice to the characters for each scene. Click on the character you want to help first, check out the situation, and give your wisest advice. 21 Best Comic Book Artists from Comic-Con: A Designer Guide The world’s largest comic book convention has some secrets that are practically unknown to lovers of graphic design and illustration. San Diego Comic-Con International is famous, as well as feared and loathed, for its lengthy lines of lemmings endlessly waiting to get into mammoth show biz hype-fests that are usually available to the whole world on YouTube within hours. But what gets all the press is just a piddling part of the Con experience, quality-wise. Topic worksheets Join us on Facebook! Repairs around the home Picture sequence story and activities about turning off the water and calling a plumber to repair a leak.

So That Happened Tonight at the supermarket I found myself behind a pretty girl in the checkout line. The universe hates me. Like this story? Did you know I have a book coming out? Free tools to create comic strips Creating cartoons and comic strips for educational uses can be quite interesting task. It obviously pushes the reluctant students to participate more and rub the dust off their brains. Students love to work in groups and compete with each other especially when there are motivating incentives for them. One of these incentives is the integration of comic strips into parts of your lesson. Thanks to web 2.0 technologies , educators and teachers will never run short of new innovative ideas.

Comic Books for Grown-Ups: 10 Masterpieces of Graphic Nonfiction by Kirstin Butler Seeing the world in six-panel strips, or what Allen Ginsberg has to do with the wonders of zygotes. Who doesn’t love comic books? While infographics may be trendy today (and photography perennially sexy), there’s just something special about the work of the human hand. Good old-fashioned manual labor, literally, brings a unique richness to storytelling where words alone sometimes fall flat. Comic Creator The Comic Creator invites students to compose their own comic strips for a variety of contexts (prewriting, pre- and postreading activities, response to literature, and so on). The organizers focus on the key elements of comic strips by allowing students to choose backgrounds, characters, and props, as well as to compose related dialogue (shown at left). This versatile tool can be used by students from kindergarten through high school, for purposes ranging from learning to write dialogue to an in-depth study of a formerly neglected genre. The tool is easy to use, made even easier with the Comic Strip Planning Sheet, a printable PDF that comic creators can use to draft and revise their work before creating and printing their final comics. After completing their comic, students have the ability to print out and illustrate their final versions for feedback and assessment.

Look at this Frakking Geekster evandorkin: Found an unfinished Batman Drawing, so I finished it. fetts: #HuyFong #sriracha (at Huy Fong Foods Inc.) I did it. ewewsashaew: Comics Once considered only child's fare, comics have emerged as a genre worthy of serious study and application. Comic books not only engage, they help develop analytical and critical-thinking skills. They prompt students to decipher meaning, purpose, and tone.

Cartoonist Creaza Cartoonist Do you have a good idea or a good story you want to get out? Do you have an assignment to create a story based on something you learned at school? Or do you just feel like goofing around and making a comic strip? Is your story about Roman gods, Little Red Riding Hood, friendship, or the future?