Addressing Our Needs: Maslow Comes to Life for Educators and Students 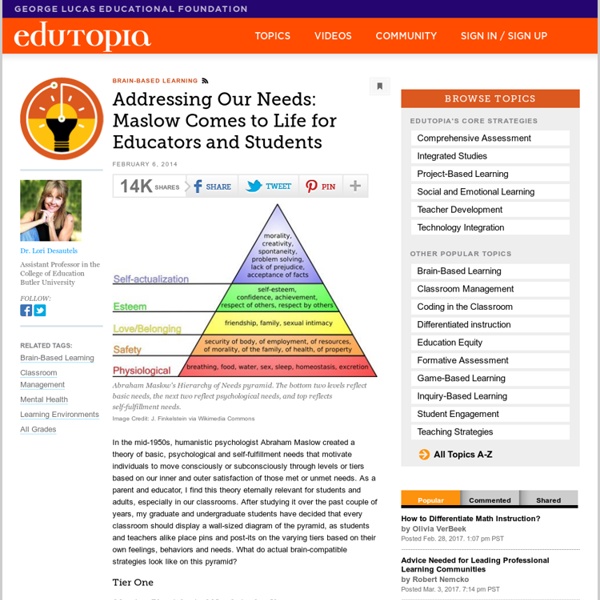 In the mid-1950s, humanistic psychologist Abraham Maslow created a theory of basic, psychological and self-fulfillment needs that motivate individuals to move consciously or subconsciously through levels or tiers based on our inner and outer satisfaction of those met or unmet needs. As a parent and educator, I find this theory eternally relevant for students and adults, especially in our classrooms. After studying it over the past couple of years, my graduate and undergraduate students have decided that every classroom should display a wall-sized diagram of the pyramid, as students and teachers alike place pins and post-its on the varying tiers based on their own feelings, behaviors and needs. What do actual brain-compatible strategies look like on this pyramid? Tier One Meeting Physiological Needs in the Classroom These elements contribute to brain-compatible learning by creating a physical environment that is inviting, warm and friendly! Questions to Ask Myself What do I need? Tier Two Related:  highered

» The End of Higher Education’s Golden Age Clay Shirky Interest in using the internet to slash the price of higher education is being driven in part by hope for new methods of teaching, but also by frustration with the existing system. The biggest threat those of us working in colleges and universities face isn’t video lectures or online tests. It’s the fact that we live in institutions perfectly adapted to an environment that no longer exists. In the first half of the 20th century, higher education was a luxury and a rarity in the U.S. Only 5% or so of adults, overwhelmingly drawn from well-off families, had attended college. This growth was enthusiastically subsidized. This expansion created tensions among the goals of open-ended exploration, training for the workplace, and research, but these tensions were masked by new income. As long as the income was incoming, we were happy to trade funding our institutions with our money (tuition and endowment) for funding it with other people’s money (loans and grants.) Then the 1970s happened.

The Ivory Tower Isn't Tweeting Social Networking | News The Ivory Tower Isn't Tweeting By Dian Schaffhauser04/09/14 If social media is the means by which organizations open dialogs and make themselves more accessible, transparent and accountable, higher education is being left behind, say two researchers from Michigan State University. Greenhow finds that "troubling," she said in a statement, since universities are trying to increase access to publicly funded research. While some faculty members are sharing their work in social media, the researchers promote the idea of universities adopting policies that reward such behaviors as it considers tenure and promotion practices. About the Author Dian Schaffhauser is a writer who covers technology and business for a number of publications.

Open Education The aim of this scoreboard is to highlight the huge potential that European institutions have in the world of OER and to help visualize this potential by compiling the existing European-provided MOOCs available on different open websites. European MOOCs are those provided by European institutions, regardless of the platform that hosts them. All of the MOOCs accounted for in the scoreboard are also listed in the MOOC aggregator on this website. Please refer to our FAQ for more information about how this scoreboard is built, what are the sources of information and how the visualization works. Downloads Infographics To download a graphical version of the scoreboard in JPG Format click here. Institutions To download European Open Education Institutions click here Upcoming EU MOOCs To download Upcoming European MOOCs in our database per country and subject click here All EU MOOCs To download ALL European MOOCs in our database per country and subject click here Contact

What students really think about technology in the classroom By Sarah Garland The grownups who make and debate education policy disagree about a lot of things, but they often take it as a given that kids love technology. And tapping into that love of gadgetry and games is a way to make students “more engaged” in learning, or so many believe. Interviews with students in the middle-income, rural district of Quakertown, on the outskirts of Philadelphia’s suburbs, suggest that kids’ relationship with technology in school is more complicated than the adults may have imagined. Yes, most kids jump at any chance to play educational games, search the Internet to research a project, connect with classmates and others online, and even do their homework digitally. Zach Werner, 14, loves the freedom he has in his cyber courses at Strayer Middle School in Quakertown. But many students also saw drawbacks to the increased use of technology in schools. Still, he said, “I slipped for a little while and was really upset, because last year I did really well.”

Yes, the Humanities Are Struggling, but They Will Endure – The Conversation Listen to the dire talk around colleges and universities, read op-eds and magazines, and you might think the humanities were in greater danger than the earth’s climate. In fact, despite the overheated rhetoric, the humanities are not at death’s door. Contemporary pressures will more likely push them into a new shape, even ultimately a healthier one. That claim might seem bizarre. The proportion of college students majoring in the humanities has sunk to an all-time low. Students have turned their backs on art history and literature in favor of studies, like accounting and nursing, that lead directly to jobs. Analysts of higher education paint a more ambiguous picture. To see how, paradoxically, a starvation diet may rejuvenate the humanities, it helps to take a long view. From those relatively recent beginnings, the modern humanities disciplines evolved slowly. But philologists and antiquarians remained in close touch; indeed they were often one and the same individual. Return to Top

July - OLT grant allows Swinburne to improve online education practices for all universities Australian universities will soon be equipped to deal with one of the major challenges of providing open online education, after Swinburne University of Technology received a $222,000 grant from the Federal Government’s Office for Learning and Teaching to research copyright, licensing and open education practices (OEP) in Australia. Working with the University of Tasmania, Swinburne will lead a research project that will collect and analyse information on the current status of OEP in Australian universities. The findings will then be used to develop an open education licensing toolkit, as a resource for learning and teaching, as well as business planning professionals in the sector. “Our idea for the project began in 2012, when Australian universities first started offering MOOCs (Massive Open Online Courses),” Swinburne’s project leader Robin Wright said. “Around the same time, the Australian Law Reform Commission (ALRC) was starting its review into Copyright and the Digital Economy.

Prototype Series Overview | Michael G. Dolence and Associates Series Overview This post begins a series that focuses upon the design and development of a Prototype Strategic Plan for an Institution of Higher Education. We recommend developing a forward-looking prototype strategic plan in order to introduce constituents to the profound changes occurring as a result of a paradigm shift currently underway. Current estimates are that there are roughly 20,000 colleges and universities worldwide. The investment in the planning process is very significant, it is in most instances disruptive. Prototype A prototype approach relieves the pressure of getting it right the first time. The rapid prototype process frames the future around these four foundation strategies Change the Paradigm, Focus on Value, Develop Capacity, and Make Everything Count. Series Over the next few weeks of this Series, we will post more detail on each of the twelve basic elements of a Prototype Strategic Plan. Change the Paradigm Like this: Like Loading... Related In "News & Information"

Students' Mobile Learning Practices in Higher Education: A Multi-Year Study | EDUCAUSE Key Takeaways Two university-wide surveys about students' mobile technology ownership and learning practices show that mobile device ownership is high and continues to increase among students. Students and instructors need technical, logistical, and pedagogical support for integrating mobile devices and apps in formal and informal learning environments. Continuous support and targeted training resources at the University of Central Florida have produced positive changes in students' mobile learning practices. Baiyun Chen, Ryan Seilhamer, Luke Bennett, and Sue Bauer, Instructional Designers, University of Central Florida Mobile technology is ubiquitous in the lives of today's college students. As an integral part of students' daily lives, mobile technology has changed how they communicate, gather information, allocate time and attention, and potentially how they learn. We conducted two surveys — one in 2012 and one in 2014 — to investigate student use of mobile technology. Key Issues Notes