How to Build a GeoDome Greenhouse - Northern Homestead 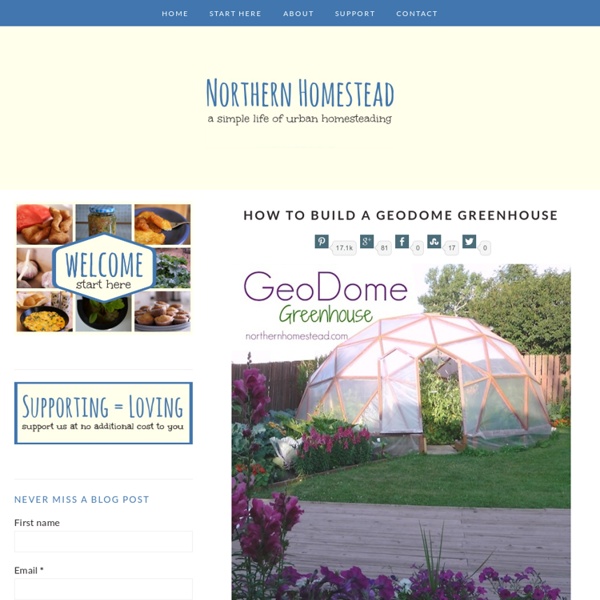 When it comes to gardening in colder climates, a greenhouse is almost a must have. It extends the growing season and gives the plants a lot more heat. With a greenhouse, we can actually pick ripe tomatoes here and grow some plants that we would not be able to without one. A greenhouse can also be a great place to hang out on those cool spring days and summer nights. When we started to look out for one to build, our expectations were very high. In a northern garden we have to deal with frost, nasty winds and hail, and also loads of snow in the winter. Very unique, lightweight structure Stable in wind and under snow Optimal light absorption Has the most growing ground space A unique hang-out place An eye catcher The GeoDome greenhouse seemed to be just what we were looking for. What materials to use? We looked at dozens of how-to instructions and even bought a pricy e-Book (with very little value). Here we share our GeoDome building experience for anyone who wants to build a GeoDome .

How to Build a Greenhouse Cody (a.k.a Wranglerstar) is one of the folks I follow on YouTube and Facebook. He regularly posts great how-to videos he films on his homestead near White Salmon, Washington. While this short video series focuses on building a greenhouse, it demonstrates how quickly the shell of a small building can be framed. He found the plans for this greenhouse at Ana White’s website. While a small building like this is not unlike a tiny house there are some significant differences which will add to the time and cost to a tiny house project. As you can see here the shell of stick framed building goes up quickly.

Three-Cornered Things Buckyballs are remarkable structures, and not just to mathematicians. In chemistry, a buckyball—more correctly, a spherical fullerene—is a molecule of carbon atoms forming a hollow spherical “shell.” Many sizes and configurations are possible (and stable!), but due to Carbon’s chemical properties they always have a few common characteristics: the faces are rings of 5 or 6 carbon atoms, and each carbon atom bonds to 3 others. The most commonly occurring one, buckminsterfullerene, is made with 60 carbon atoms in the shape of a soccer ball: These molecules were named after architect Richard Buckminster Fuller due to their resemblance to his famous geodesic domes. Off Grid World – Get Free Home Heating With an Attached Greenhouse Greenhouses are amazing for their traditional purpose – growing plants and extending the growing season in cold climates, but did you know a greenhouse can also be used to heat your home? A greenhouse attached to a home works as a passive solar heater by collecting solar energy during the day and transmitting heat into the home. Some homes are built with attached sunspaces, conservatories, or solariums, which are a similar idea, but are primarily intended as extra living space, whereas a greenhouse is intended for plant growing.

Three-Cornered Things Buckyballs are remarkable structures, and not just to mathematicians. In chemistry, a buckyball—more correctly, a spherical fullerene—is a molecule of carbon atoms forming a hollow spherical “shell.” Many sizes and configurations are possible (and stable!), but due to Carbon’s chemical properties they always have a few common characteristics: the faces are rings of 5 or 6 carbon atoms, and each carbon atom bonds to 3 others. The most commonly occurring one, buckminsterfullerene, is made with 60 carbon atoms in the shape of a soccer ball: These molecules were named after architect Richard Buckminster Fuller due to their resemblance to his famous geodesic domes. Northlands Winter Greenhouse Manual by Carol Ford A Must-Have Manual! I've wanted to build a greenhouse for years. This manual is exactly what I've needed.

warpplayer: QuickTime movie player with realtime warping and navigation Intended primarily for fulldome projection using a spherical mirror Also used as a navigable movie player Written by Paul Bourke, Ian Hooper, Evan Hallein Documentation by Paul Bourke Greenhouses from Old Windows and Doors Greenhouses made from Old Windows and Doors Calling all used awning windows, bay windows, storm doors and clerestories... back to service. Greenhouse made from recycled windows by Jan and Ed Vitse of New Look Floral (a garden and floral business) in Rochester, Mn.. This little gem, made from recycled windows was built in 2003. The structure is 12 feet long by 6 1/2 wide, and 10 1/2 feet tall. newlookfloralrochester.com Constructed from reclaimed doors, windows and millwork from a home renovation. Doors are old pocketdoors on slides, currently slid open.

How I built my Geodesic Domes How to Build A Geodesic Dome Support this site Strength of a dome This picture is of a 3 frequency dome, roughly 16 feet in diameter, with four adults sitting on top of it. It is made of 3/4 inch awning tubing (which is stronger than 3/4 inch conduit). The Garden Igloo is a Pop-Up Geodesic Dome Perfect for Any Backyard Garden Igloo offers the perfect solution for people who love the outdoors but sometimes need a little respite from the elements! This 2.2 meter high geodesic dome is made from rust and rot-free recyclable materials and can be used in a myriad of ways-as a greenhouse, playground or even a Jacuzzi cover. Hit the jump to learn more about this adorable shelter and find out how to buy your own!

Cardboard Domes - Homepage: Constructing Cardboard Geodesic Domes That Will Survive Burning Man and the Black Rock Desert This site was designed in response to people asking us how we made our domes and who were interested in making their own. The design was borrowed from a 1973 edition of Popular Science and was improved upon to meet the rigors of the Black Rock Desert. These domes have served as an effective shelter against wind, extreme heat and, once painted, rainfall. The largest of the three domes in the picture opposite measures approximately 12' 7" in diameter and is about 6' 3" high at its center. We recommend building the largest one.

Grow Food Year Round With Radically Sustainable Passive Solar Greenhouse Interested in building your own greenhouse, but don’t know where to begin? Now, there’s theGreenhouse of the Future. Filmmaker Curt Close teamed up with Anaconda Productions and the non-profit SolutionEra to release a DVD, eBook and step-by-step guide on how to build a passive solar greenhouse that utilizes renewable energy and is built from natural and recycled materials. This is a great way to practice radical self-reliance and save money by growing your own foodyear-round without relying on unsustainable energy sources. It is also a great way to reconnect with nature and bask in the warm rays of the sun in your cozy greenhouse in the dead of winter.

Studio Sprout’s backyard greenhouse combines stylish form with fabulous function Backyard greenhouses tend to toe the line when it comes to form following function, meaning they end up being an eyesore in an otherwise immaculate yard. The Studio Sprout greenhouse is of a different ilk, adding style and beauty without sacrificing any functionality. According to Studio Shed, the makers of the Sprout, the "Studio Sprout is technically optimized for the most discerning gardener and sets a new bar of quality for a consumer greenhouse." The prefabricated greenhouse is made from sustainable materials, including FSC certified lumber and mixed-source recycled metal and materials throughout. The upper windows open for ventilation while auto-opening vents and an optional solar-powered fan help keep plants the perfect temperature. With a tapered roof, brushed aluminum trim and a choice of paint colors, the Sprout makes a beautiful backdrop for avid gardeners’ prized plants.

'The Pearl' dome house - passive solar design with a touch of high-tech Like its stablemate the Domespace house, David Fanchon's eco-friendly design is aimed at maximizing passive solar energy – though unlike the Domespace there's no rotating option. Dubbed "The Pearl," the standout features of the elegant domed structure are its integrated solar panels which can be adjusted to different angles to provide additional shade and optimize energy collection through the changing seasons. The pictures tell the story of the way in which The Pearl takes advantage of passive solar principles. Large south-facing (or north-facing if you reside below the equator) bay windows fitted with an automated venting system soak up the winter sun and allow light to enter every room, while the white steel roof reflects the sun in summer. The aerodynamic dome shape delivers protection from high winds and wild weather and the arch shape also provides resistance to earthquakes. More info at the Solaleya site.