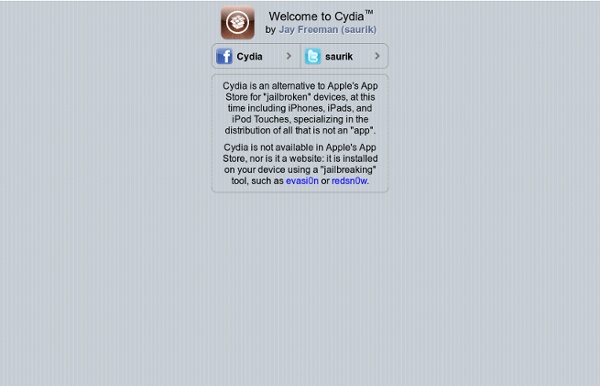 AppSync for iPhone 3.1.2 Jailbreak Firmware Advertisements AppSync patches MobileInstallation file on iPhone OS 3.x which is needed in order to install .ipa files manually without using iTunes. A new version of AppSync has now been released which is compatible with the latest iPhone 3.1.2 firmware. Make sure you have jailbroken your iPhone with firmware 3.1.2 before following the steps below. Complete step-by-step guide on how to jailbreak your iPhone with firmware 3.1.2 can be found here. Here’s what you have to do to patch the mobileinstallation file on your iPhone: Step 1: Start “Cydia” on your iPhone. Step 2: Touch on “Manage” tab on the bottom. Step 3: Now touch on “Sources” as seen in the screenshot below: Step 4: Touch on “Edit”, and then on “Add”. Cydia will now automatically update your sources by following a series of automated steps as shown in the screenshots below: Step 5: After installation is completed. You should now be able to install .ipa files manually on your iPhone running firmware 3.1.2.

How to use Banshee to manage your iPod in Ubuntu This tutorial will guide you in installing, setting up and using Banshee to manage your iPod in Ubuntu. Though the steps to install Banshee are specific to Ubuntu (or any Linux distribution that uses the Synaptic Package Manager), the steps to actually use Banshee can be applied to any Linux distribution. Note: if you aren’t using Ubuntu, visit the Banshee downloads page to obtain Banshee for your version of Linux. Open the Synaptic Package Manager by selecting System -> Administration -> Synaptic Package Manager. click to enlarge Click the Search button from the top of Synaptic, enter banshee and click Search. Click the box next to the banshee entry and select Mark for installation. A window will appear asking you to confirm that you wish to install Banshee and the required packages associated with it. Click the Apply button. A Summary window will appear asking you to confirm yet again that you wish to download and install Banshee. The download and installation will being.

Transferring your iTunes Library For most users, iTunes does a great job of handling all of the details of managing your media library for you, allowing you to manage your content through iTunes itself and not having to worry too much about the underlying files and folders that make up your iTunes library. Unfortunately, this user-friendly approach has one serious limitation: When it comes time to move your iTunes library, it can often be a bit of a challenge to figure out exactly what pieces you need to move and how to go about doing this. Many iTunes users start out with a basic iTunes library and use the default settings to store all of their media content on their primary internal hard drive. However, as you add new content over time, particularly with the additional video content now supported by iTunes, you may soon find that your library threatens to take over your computer. Another common scenario many users find themselves in is what to do when they upgrade to a new computer. How iTunes Manages Media Content

Jailbreak iPhone 3.1.2 with Sn0wbreeze Advertisements Sn0wbreeze like blackra1n, redsn0w and PwnageTool is yet another jailbreaking tool for iPhone and iPod touch which can be used to create custom .ipsw files. But unlike the PwnageTool, Sn0wbreeze is fully compatible to work with Windows 7/Vista and XP machines. If for some reason the earlier mentioned tools didn’t work for you, you can give Sn0wbreeze a try and see if it helps in jailbreaking your iPhone with a custom .ipsw file. Note: Sn0wbreeze is a beta release and it may have some issues. blackra1n and PwnageTool are still the recommended tools for jailbreaking iPhone and iPod touch. The current version of Sn0wbreeze supports iPhone 2G/3G/3GS(non MC) and iPod touch 1G and 2G (non MC). Step 1: Download and install the latest version of iTunes. Step 2: Now start iTunes and sync your iPhone with your PC so that it backs-up all your important data including settings, apps, music, contacts and photos. Step 4: Start Sn0wbreeze and select “Simple Mode”.

Using an iPhone or iPod Touch with Ubuntu and Kubuntu This page will help you connect your Apple iPod, iPhone or iPad devices to Ubuntu. Ubuntu 14.04 Trusty Tahr The upcoming Ubuntu 14.04 LTS will support devices running iOS7 software version, thanks to newer libimobiledevice. Ubuntu 12.04 Precise Pangolin Ubuntu will automatically detect when you're plugging an iPad to your computer and will identify (via GVfs) two devices: 'My iPad' and 'Documents on My iPad'. Once you've "connected" to the 'Documents on My iPad' device using Gigolo, you can access the device via a file manager such as Thunar (>=1.6.x; see Xfce 4.12 PPA) or Nautilus and access the 'Documents' folder of the apps that support the iTunes Document Sharing feature (also called the "House Arrest" protocol). Following is a non-exhaustive list of free apps that support file transfers as described above: Videos or Audio: 'OPlayerHD Lite', 'HD Player' Photos: 'Another Photo Viewer' PDFs or E-books: 'Documents 2', 'ciando Reader' Ubuntu 10.04 Lucid Lynx Music players Syncing with Amarok

iPHONiX Free Apps IPhone | Free Apps - All The Best Free Apps Free Apps iPhone Tristis App for iPhone is just perfect for those who love logic games, with a little bit of math element thrown in. The game rule is pretty straightforward – complete the magic square that is equal to 65 adding numbers vertically, horizontally and main diagonals by putting purple chips from right field to open spots on left field. The grey chips are static chips that can’t be moved. Tristis iPhone app could be downloaded from iTunes App Store for free. Tristis app for iPhone is a challenging puzzle game of numbers. Typical of all puzzle games, Tristis iPhone app got multiple difficulty levels (beginner, easy, medium and hard) that you can choose depending on how confident you are about your abilities. Finally, if you set a record for a level without using hints and exiting the game, your result will be shown in the Game Center. Tristis app for iPhone is a real challenger to say the least. Pokerabble app for iPhone is a new invention.

Sync your iPhone Music Libary With Rhythmbox in Ubuntu Karmic (No Jailbreaking Required) In Mac and Windows, you can easily sync your iPhone/iPod Touch with iTunes, but in Linux, there is no easy way to sync your iDevice’s music library with any of the media player. Even if you are willing to jailbreak your phone, there are still plenty of complicated steps that you need to do to get the syncing to work. With the release of iFuse (and a bunch of other library), things have changed. Remove all iFuse related files If you have previously installed ifuse in your system, you need to remove it and its related files. You also need to remove the jonabeck repository from your apt list. Delete the jonabeck PPA from the sources.list file. Refresh your system. Installing iFuse (for Ubuntu Karmic only) Add the iFuse PPA to your repository: Update your system If there is a need, restart your computer. Install the relevant packages Update: I have removed libiphone0 libiphone-dev from the above packages since they are not longer needed. Click on the key icon to unlock. That’s it.

iPhoneHeat All Tech Related - Your #1 Source for all the latest news, reviews and guides on the iPhone, iPad, iPod Touch and everything else tech related. Jailbreak iOS 4.0.2 with Redsn0w [How to Guide Advertisements Ok guys I just tested it on an old iPhone 3G lying around and can confirm that this works! Now that Apple has released iOS 4.0.2 to patch the PDF exploit, JailbreakMe which was previously used to jailbreak iOS 4.0.1 on iPhone 4, 3GS, 3G, iPod touch 3G / 2G and iPad is now incompatible with iOS 4.0.2. But if you have iPhone 3G (which doesn’t rely on an unlock) or an iPod touch 2G (non-MC model) lying around, you can jailbreak it using the existing version of Redsn0w. Step 1: Download iOS 4.0.2 for your version of iPhone and iPod touch. Step 2: Update to this latest firmware using the IPSW file you just downloaded via iTunes 9.2.1. Step 3: Start Redsn0w 0.9.5b5-5 (download link given below) and point it to iOS 4 (Final Version), and not iOS 4.0.2 firmware file to proceed with the jailbreak. Step 4: Now select “Install Cydia” and click “Next”. Step 5: Now make sure your device is both OFF and PLUGGED IN to the computer before you click “Next”. You may also like to check out: