Melon: A Headband and Mobile App to Measure Your Focus by Melon 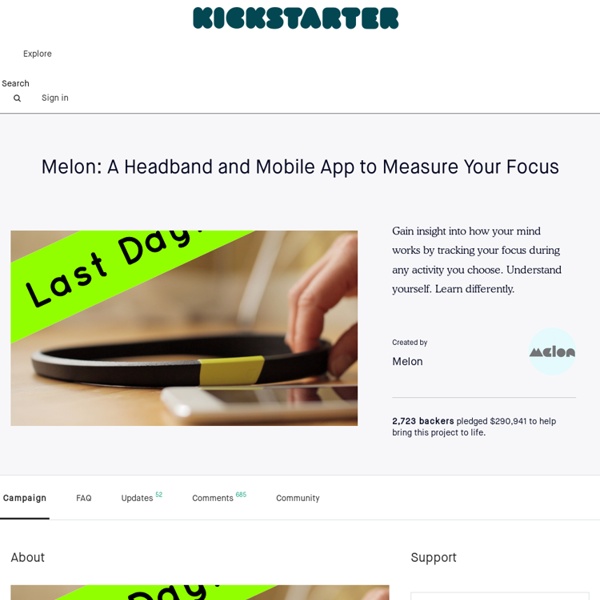 How to Stop Worrying Undoing the Worrying Habit Once acquired, the habit of worrying seems hard to stop. We're raised to worry and aren't considered "grown up" until we perfect the art. Teenagers are told: "you'd better start worrying about your future". If your worries aren't at least as frequent as your bowel movements, you're seen as irresponsible, childish, aimless. To the extent that worrying is learned/conditioned behaviour, it can be undone. Centuries-old cultural conditioning has given us a nasty neurosis: the belief that happiness must be "earned". Laid on top of the first neurosis is the idea that spending money will make you happy. So: we never stop working, we never stop spending money, we're never really happy – ideal conditions, coincidentally, for a certain type of slave economy. You won't stop worrying if you think it serves you. The fight-or-flight response (FOF) is useful on rare occasions of real danger. Worrying is never useful. Rearranging the mental furniture Accelerator-Brake analogy

Limeade Blast 18,000mAh Ultra-High Capacity Battery Pack by Limeade Help us push the boundaries of portable battery technology. Other, lower capacity batteries currently found on the market, are just another thing you have to remember to charge. The Limeade Blast 18000mAh provides enough juice to charge an iPhone 5 twelve times without having to recharge the external battery. Until now, super high capacity battery packs were too bulky and heavy to be of much use. Each battery in the Limeade Blast series packs a ton of power in a sleek and compact form. Current external batteries on the market use standard 1A inputs. Although the L180X (18000mAh) battery is our most innovative product, we also developed two additional sizes- the L130X (13000mAh) and L156X (15600mAh). Because the Limeade Blast charges devices anywhere, anytime and won’t be drained after just a couple uses, it is the perfect portable external battery for a variety of situations. Perfect for: * Input charging time depends on charger output speed. During Kickstarter campaign (May 2013) June 2013

InteraXon The biology of dreaming o one would normally consider David Maurice, Ph.D., professor of ocular physiology in the Department of Ophthalmology at Columbia-Presbyterian Medical Center, a revolutionary. Nevertheless, he has reignited a decades-long controversy that could spark a revolutionary re-evaluation of an entire field of behavioral research. Dr. Maurice has developed a startling new line of scientific inquiry that, when added to other findings, could change our understanding of rapid eye movement (REM) sleep and the nature of dreams. What Maurice has done is to suggest an alternative explanation for the phenomenon known as REM sleep, the stage in which the eyes rapidly move and most dreams occur. Dr. "Without REM," Maurice told 21stC, "our corneas would starve and suffocate while we are asleep with our eyes closed." Maurice's interest in REM began a few years ago. "What is at stake here is a theory of dreams that is scientifically valid," Dr. Interpretation vs. observation Drs. No final answer in sight 1.

The Temperfect Mug: Coffee and Tea at The Perfect Temp by dean verhoeven If you missed our Kickstarter campaign, come on over to our website at to find out what we're up to and to order a mug! You can also keep up with us on our Facebook page, Twitter feed and on Google+. -A project brought to you by hot beverage experts Dean Verhoeven & Logan Maxwell- Is your coffee or tea too hot, and then too cold? This project was born of my frustration with not being able to drink my carefully-brewed, but too hot, coffee right after I made it, and it then getting cold before I had time to enjoy it. I thought about this problem and had an inspiration: why not take the excess heat out of the too-hot coffee, store it in the wall of the mug, and then use it later to keep the coffee at a pleasant drinking temperature? This extra insulation layer absorbs the excess heat from your drink, and brings it quickly to a comfortable temperature. This work was completed several years ago, and I now have mug prototypes that work smashingly. The Javabliss Temperfect mug

EEG-Neurofeedback Training Neuroheadset Mindmachine Brain-Computer-Interface - MeTa-MinD 13 Things to Avoid When Changing Habits | Zen Habits “Habit is habit, and not to be flung out of the window by any man, but coaxed downstairs a step at a time.” - Mark Twain Post written by Leo Babauta. Follow me on Twitter. I’ve learned a lot about changing habits in the last 2 1/2 years, from quitting smoking to taking up running and GTD and vegetarianism and waking early and all that. I could go on, of course, but you get the picture. I’ve not only learned a lot about what you should do when changing habits, but through my failures, I’ve learned about what not to do. And trust me, I’ve had lots of failures. I’ve found failures to be just as important as successes when trying to learn how to improve, especially when it comes to changing habits. I’ve done that, with one failure after another, and would like to share a few things I’ve learned to avoid when trying to change a habit. “Motivation is what gets you started. Taking on two or more habits at once. “We are what we repeatedly do.

Chineasy: The easiest way to learn Chinese by ShaoLan Hsueh Because we make learning Chinese…easy! Sorry for the pun. Seriously though, it works! Our illustrations are fun, quirky and memorable and we have plans, big plans, if you will help us! Chineasy has been on the Internet now for a few months, since my TED talk, and we have already amassed quite a following, if we do say so ourselves. We have turned to Kickstarter because we KNOW that there is a real desire for a book, as well as other Chineasy material. It is evident that people are hungry to learn about China. The real agenda behind this project is to bridge the gap between the East and the West. I want to give the West a real understanding and knowledge of China and Chinese culture through their own eyes rather than through layers of packaging, manipulation or loss in translation. The Chinese language has long been considered the most difficult major language to learn, largely on account of the vast number and complexity of its characters. In Chineasy we started off with 8.

MetaMind Mind-Machine binaural beat Brainwave Lab - MeTa-MinD MetaMindMachine is a Java open-source GPL binaural beat brainwave program, that plays binaural beats and flashes the screen in the same frequency, according to xml-style sequence files in the sequence directory, to stimulate the brain to resonate in specific EEG-brainwave-patterns. After multiple sessions this improves the ability of the brain to go to all possible brainwave frequencies, and to switch between brainwave patterns easily and quickly. In later stages of training the user gets the ability to switch to certain brainwave-frequencies and related mental states consciously without additional technical equipment. Some studies indicate that related effects of certain brainwave frequencies, like increased immune function and release of certain neurotransmitters can result. It is also possible to optionally increase the entrainment-response effect, by using an EEG device for EEG neurofeedback training of brainwaves and transcranial electrostimulation. MetaMind Machine can be used for:

How to increase serotonin in the human brain without drugs Superior Motors: Community Restaurant & Farm Ecosystem by Kevin Sousa "For the first time in my career, I have the opportunity to breathe life into a restaurant that is not chasing trends, but a restaurant that has no choice other than to represent a Place and Time by producing food representative of its past, present, and future." - Kevin Sousa Play Superior Motors will serve fresh, local and thoughtfully crafted food in a true urban food desert. Superior Motors will be accessible and participatory. Superior Motors will truly embrace "farm to table" and "local", with abundant access to fresh, organic produce from a two-acre urban farm one block away, a 1000 sq. ft. rooftop greenhouse as well as 4000 sq. ft. of additional roof space to accommodate a raised bed garden. Superior Motors will provide professional culinary training and opportunities at no cost to local residents. Superior Motors is part of an established, community-based ‘ecosystem’ that combines food, farming, art, history, industry, training and lodging. James Beard Semi-Finalist

Home How the Brain Stops Time One of the strangest side-effects of intense fear is time dilation, the apparent slowing-down of time. It's a common trope in movies and TV shows, like the memorable scene from The Matrix in which time slows down so dramatically that bullets fired at the hero seem to move at a walking pace. In real life, our perceptions aren't keyed up quite that dramatically, but survivors of life-and-death situations often report that things seem to take longer to happen, objects fall more slowly, and they're capable of complex thoughts in what would normally be the blink of an eye. Now a research team from Israel reports that not only does time slow down, but that it slows down more for some than for others. An intriguing result, and one that raises a more fundamental question: how, exactly, does the brain carry out this remarkable feat? Researcher David Eagleman has tackled his very issue in a very clever way . Was it scary enough to generate a sense of time dilation?