Turn an Old PC Into a NAS, VPN, Media Streamer, and More with Amahi 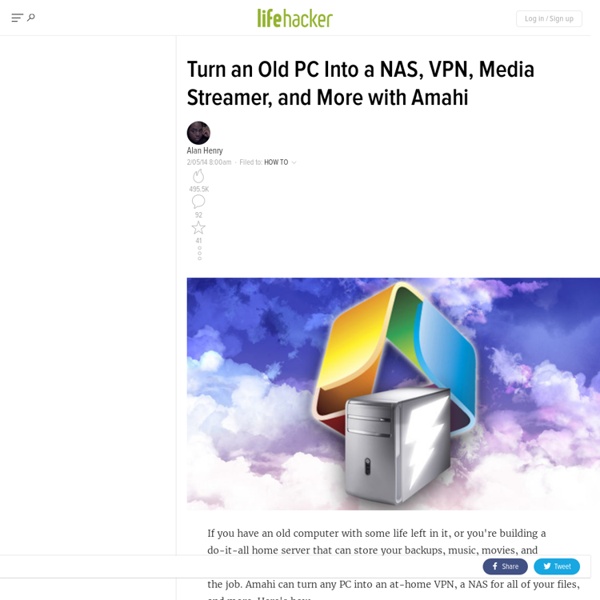 The best free online conference platforms - Freelancers Union Source: Mike Licht Only half of freelancers work in their local cities and communities, so millions of independent workers across the country rely on online virtual meeting platforms to talk to clients and collaborate with other freelancers. Setting up a virtual meeting is the kind of thing that shouldn’t be complicated -- but always seems to be. But most importantly, they all provide free plans (not just free trials) that probably have everything you need! Google Hangouts You can’t beat free. Join.me This is a virtual meeting application that focuses on sharing your screen, not on giving you face-to-face with your client. I used join.me extensively in virtual training at a previous job, and found it to be extremely reliable. GoToMeeting GoToMeeting provides video conference for up to 3 people for free. If you like GoToMeeting, you might also want to consider using GoToWebinar if you ever want to upgrade. MeetingBurner UberConference The most modern-looking service by far. Skype

Why Ultra HD 4K TVs are still stupid The flood of TVs with higher resolution than 1080p is inevitable, but at typical TV sizes, quadruple the pixels makes no difference in picture quality and are not worth the extra price. As we all expected , the big news at CES this year was Ultra HD 4K displays. It seemed that every TV manufacturer had one, ranging from massive LED LCDs to midsize LED LCDs to midsize OLEDs. We've talked about this before , but now with more info, and definitive product announcements, let me explain in exacting, excruciating detail why 4K TVs are still stupid . Allow me to start with the most important point: 1. 2. Try this. Is there some wiggle room thanks to variances in how people see? Let's skip ahead a step. 3. 84-inch TVs are never going to be mainstream Never. I should clarify what I mean by "TV." 4. Could people sit closer? So they can sit closer now, but don't. And speaking of viewing distance, this is precisely why comparisons to the Retina Display iPad are specious . 5. Exactly. Eventually... 8.

s | Password Haystacks: How Well Hidden is Your Needle? ... and how well hidden is YOUR needle? Every password you use can be thought of as a needle hiding in a haystack. After all searches of common passwords and dictionaries have failed, an attacker must resort to a “brute force” search – ultimately trying every possible combination of letters, numbers and then symbols until the combination you chose, is discovered. If every possible password is tried, sooner or later yours will be found. The question is: Will that be too soon . . . or enough later? This interactive brute force search space calculator allows you to experiment with password length and composition to develop an accurate and quantified sense for the safety of using passwords that can only be found through exhaustive search. <! (The Haystack Calculator has been viewed 3,878,046 times since its publication.) IMPORTANT!!! It is NOT a “Password Strength Meter.” Since it could be easily confused for one, it is very important for you to understand what it is, and what it isn't: Okay.

Say goodbye to capitalism as we know it - Keynote Speaker By Jeremy Rifkin Shutterstock.com A new economic system has entered the world stage. The Collaborative Commons is the first new economic paradigm to take root since the advent of capitalism — and its antagonist socialism. The trigger for this great economic transformation is known as Zero Marginal Cost. Tech firms' cash hoard eases meltdown fear The two-month swoon in technology stocks has given investors flashbacks to the dot-com meltdown. Companies never anticipated, however, a technology revolution that might unleash “extreme productivity” bringing marginal costs to near zero, making information, energy, and many physical goods and services nearly free, abundant, and no longer subject to market exchanges. The ‘free’ revolution Economists acknowledge the powerful impact Zero Marginal Cost has had on the information goods industries, but until recently, have argued that it would not cross into the brick-and-mortar economy of energy, and physical goods and services. Jeremy Rifkin

How to Anonymize Everything You Do Online | Threat Level One year after the first revelations of Edward Snowden, cryptography has shifted from an obscure branch of computer science to an almost mainstream notion: It’s possible, user privacy groups and a growing industry of crypto-focused companies tell us, to encrypt everything from emails to IMs to a gif of a motorcycle jumping over a plane. But it’s also possible to go a step closer toward true privacy online. Mere encryption hides the content of messages, but not who’s communicating. Use cryptographic anonymity tools to hide your identity, on the other hand, and network eavesdroppers may not even know where to find your communications, let alone snoop on them. “Hide in the network,” security guru Bruce Schneier made his first tip for evading the NSA. “The less obvious you are, the safer you are.” Though it’s hardly the sole means of achieving online anonymity, the software known as Tor has become the most vouchsafed and developer-friendly method for using the Internet incognito. Email

Apple Pay setup detailed & retailers begin training as service launches at Apple HQ The launch of Apple Pay, Apple’s NFC and Touch ID-based mobile payment solution, is upon us. Apple has begun preparing for the launch by kicking off Apple Pay training programs for its own group of retail store employees and by working with retailers to prepare for the debut later this month. The training materials, shared by a reliable source, for the Apple Pay launch at Apple retail stores have also detailed some new specifics regarding the Apple Pay setup and transaction processes both on customer iPhones and in Apple retail stores… As can be seen in the image above, Apple Pay can be set up via the Passbook application through both the initial iOS 8 setup process or in a new Settings.app tab called Passbook & Apple Pay. Credit cards can be added to Passbook via an iTunes account or by using the iPhone’s camera to scan in details. Interestingly, the Passbook/Apple Pay settings will have deep ties to the credit card companies and banks involved in the service. Like this: Like Loading...