Life is a game. This is your strategy guide 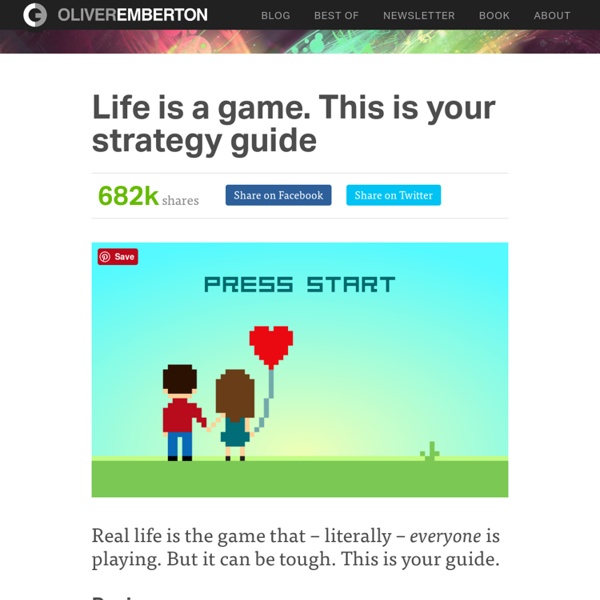 682k shares Share on Facebook Share on Twitter Real life is the game that – literally – everyone is playing. But it can be tough. This is your guide. Basics You might not realise, but real life is a game of strategy. Most importantly, successful players put their time into the right things. Childhood Life begins when you’re assigned a random character and circumstances: The first 15 years or so of life are just tutorial missions, which suck. Young adult stage As a young player, you’ll have lots of time and energy, but almost no experience. This is the time to level up your skills quickly. Now that you’re playing properly, your top priority is to assign your time as well as possible. This may sound simple, but the problem is you won’t always know what tasks to choose, and your body won’t always obey your commands. How to obey your own commands Many players find that when they choose to do something – say “go to the gym” – their body ignores them completely. This is not a bug. Where you live

For Your Next Bike Ride, Bring Along This Friendly Drone Someday in the not-too-distant future, you might take a bike ride with a couple of drones--one flying in front, one in back--to protect you from nearby cars. As you ride around tight corners, the “Cyclodrone” will shine a beacon of light to warn drivers that you’re there, hosting a tiny camera to record any accidents. The design is one of several concepts from a team at frog design that wanted to rework the current evil image of the drone. “Drones are taking a beating in the press, being characterized as spies and assassins,” says Cormac Eubanks, who developed the Cyclodrone. Along with the Cyclodrone, the designers suggested that drones could be used to help firefighters find victims in burning buildings (and even automatically lead those victims to safety). It might take a little while before all of the ideas could actually be produced. The Cyclodrone could be made today, but would be tricky for longer rides, since the battery would need frequent recharging.

A Rebuttal to Upton Sinclair's "The Jungle"