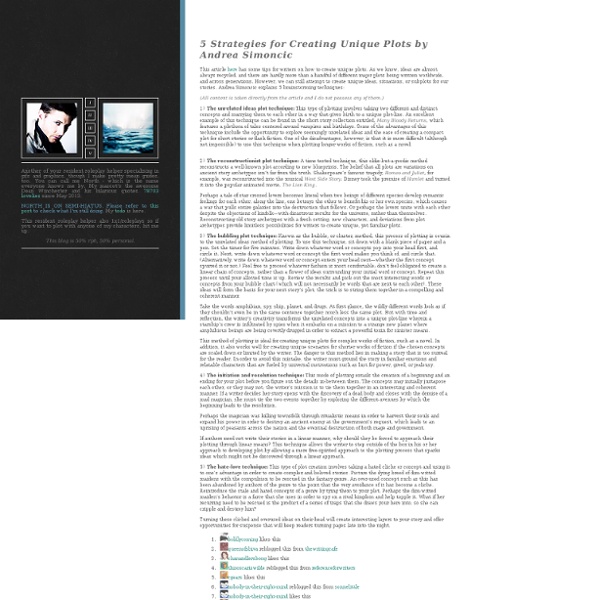 Medieval Names - List of Medieval Names TEN SIMPLE KEYS TO PLOT STRUCTURE Structure is something that every agent and executive in Hollywood talks about, and that all of us teachers/authors/consultants/gurus/whatever go on and on about, to the point that it can seem complicated, intricate, mysterious and hard to master. So I want present plot structure in a way that simplifies it – that will at least give you a starting point for properly structuring your screenplay without overwhelming you with rules and details and jargon. Here are what I consider ten key elements of structure – ten ways of looking at structure that will immediately improve the emotional impact – and commercial potential – of your script. THE SINGLE RULE OF STRUCTURE I once got to work with long time television writer Doug Heyes, who used to say that there is only one rule for achieving proper plot structure: What’s happening now must be inherently more interesting than what just happened.

10 Tips for Writing Loglines Loglines are tricky things – distilling 120 pages of script into one sentence and imbuing it with the power to summarise, titillate and intrigue is a surprisingly difficult task. As a writer it can be hard to develop a good logline because you are invested equally in each part of your work – identifying the crucial story elements and leaving everything else out feels like you aren’t doing your script justice. But remember, a good logline is crucial to selling your script; in a covering letter, in a pitch, in the 30 second window you have with an executive when you accidentally meet on the Great Wall of China. That being the case it is vital that you develop a good logline for your magnum opus, something with sizzle and pop, but also, crucially, something that tells the audience what the script is about. The difference between a logline and a tagline A tagline is a piece of marketing copy designed to go on posters to sell the film - In space no one can hear you scream (Alien) 1. 2. 3. 4.

How to Build Subplots From Multiple Viewpoints Multiple viewpoints provide diversion from, and contrast to, the protagonist’s perspective. They can deepen conflict, enlarge a story’s scope and add to a novel the rich texture of real life. Subplots carry those effects even further. Subplots and multiple points of view are often linked by their very natures. Of course, subplots and multiple points of view make novels longer and more work, but rewards for that effort are there for writer and reader alike—that is, if they are successful. —By Donald Maass, author of The Breakout Novelist Choosing a subplot begins with choosing characters with which to work. If none are to be found, it might be worthwhile to grow some of your secondary characters, depending on the nature of your novel. Subplots will not have the desired magnification effect unless there are connections between them. A second requirement of subplots is that they each affect the outcome of the main plotline. A third quality of successful subplots is that they range.

Plotting Short Fiction Last month at MRA, I listened to Jacqueline Woodson speak about her writing process. It wasn’t the first time I heard her speak and I hope it won’t be my last. She is one of the writers I consider as my personal mentor. Not to be over-dramatic, but listening to her last month changed my writing life. She said, “Plot happens.” One thing I’ve learned about writing fiction is the importance of allowing the characters’ to have free will. Kim Jones invited me into her fourth grade class to lead a fiction unit. Still, as a teacher of young fiction writers, it’s necessary to teach what works for me and what might work for other writers. Yesterday I introduced the story mountain to the fourth grade fiction writers. Then I gave them this planning sheet (click the link for a PDF). About half of the writers in the room used the planning sheet and found it helpful. A few notes: Enemy Pie by D. Like this: Like Loading...

Author Andy Weir Shares Advice on How to Write More You have ideas for stories, but when you launch your word processor, you stare helplessly at a blank page. Every time you try to write, you end up spending the evening watching videos of cats on YouTube instead. Why is this happening? (Do you need different agents if you write multiple genres?) Column by Andy Weir, who was first hired as a programmer for a national lab at age fifteen and has been engineering software ever since. 1: You don’t know which story to pick You don’t just have one idea, you have several. The problem with the above logic is that it leads to a stalemate. Solution: Write the first chapter of each story. 2: Stories are always more awesome in your head than they are on paper Your heroine, Susan, had neglectful and disinterested parents. That’s the idea you had, anyway. “Susan first saw Joe at the diner. After a few incidents like this, you got gun-shy about writing. Solution: Ok, so it won’t be what you imagined. 3: You’ve been telling the story instead of writing it

25 Things You Should Know About Plot Previous iterations of the “25 Things” series: 25 Things Every Writer Should Know 25 Things You Should Know About Storytelling 25 Things You Should Know About Character And now… 1. A plot is the sequence of narrative events as witnessed by the audience. 2. Some folks will ask, incorrectly, “What’s the plot?” 3. A plot functions like a skeleton: it is both structural and supportive. 4. The biggest plot crime of them all is a plot that doesn’t make a lick of goddamn sense. 5. The simplest motherfucker of a plot is this: things get worse until they get better. 6. Fiction is driven by characters in conflict, or, put differently, the flame of fiction grows brighter through friction. 7. Of course, the essence of the essential conflict — the one below all that Wo/Man versus stuff — is a character’s wants versus a character’s fears. 8. A plot grows within the story you’re telling. 9. 10. Plot offers the promise of Chekov and his gun, of Hitchcock and his bomb under the table. 11. 12. 13. 13. 14.

Physical Descriptions - List of Hair Colors Hair Color List (Note: an updated and expanded version of this list appears in my 15K-word book How to Describe Hair and Skin. See below.) [First, my profound apologies to the vast majority of readers who don't steal content, but I have to state the following. This article and all content on this website belongs to Val Kovalin, copyright © Obsidianbookshelf.com, except where noted. Unauthorized use and/or duplication of this material without written permission from Val Kovalin is strictly prohibited. I'll admit it – hair colors are fun, even for someone like me who advocates keeping description to a minimum. Natural human hair color comes in these basic shades: blond(e), red, light brown, dark brown, black, gray, white. Don't forget about highlights! What are the nouns that apply to people with certain hair colors? Also, sometimes words pick up additional shades of meaning over time that are irrational but exist, and you won't find these connotations listed in the dictionary.