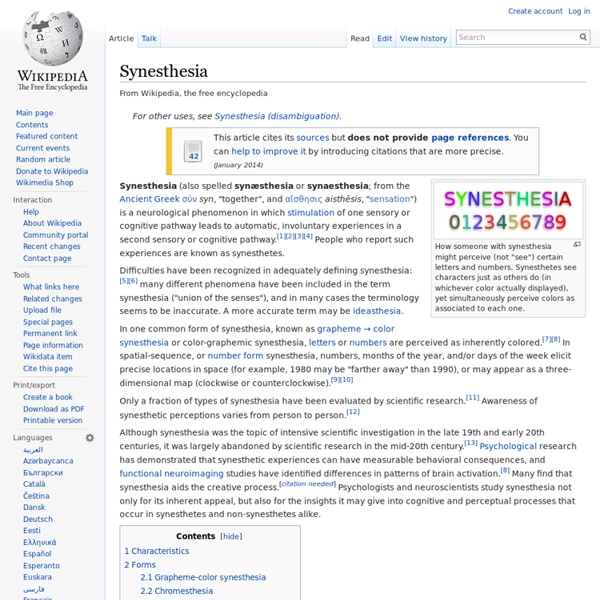 How someone with synesthesia might perceive (not "see") certain letters and numbers. Synesthetes see characters just as others do (in whichever color actually displayed), yet simultaneously perceive colors as associated to each one. Synesthesia (also spelled synæsthesia or synaesthesia; from the Ancient Greek σύν syn, "together", and αἴσθησις aisthēsis, "sensation") is a neurological phenomenon in which stimulation of one sensory or cognitive pathway leads to automatic, involuntary experiences in a second sensory or cognitive pathway.[1][2][3][4] People who report such experiences are known as synesthetes. Difficulties have been recognized in adequately defining synesthesia:[5][6] many different phenomena have been included in the term synesthesia ("union of the senses"), and in many cases the terminology seems to be inaccurate. A more accurate term may be ideasthesia. Characteristics[edit] There are two overall forms of synesthesia: projecting synesthesia and associative synesthesia.

Rare but Real: People Who Feel, Taste and Hear Color When Ingrid Carey says she feels colors, she does not mean she sees red, or feels blue, or is green with envy. She really does feel them. She can also taste them, and hear them, and smell them. The 20-year-old junior at the University of Maine has synesthesia, a rare neurological condition in which two or more of the senses entwine. Numbers and letters, sensations and emotions, days and months are all associated with colors for Carey. The letter "N" is sienna brown; "J" is light green; the number "8" is orange; and July is bluish-green.

Temporal lobe epilepsy Introduction[edit] Over forty types of epilepsy are recognised and they are divided into two main categories: Partial seizures and generalized seizures. Partial seizures account for approximately sixty percent of all adult cases.[1] Temporal lobe epilepsy (TLE) is the single most common form of partial seizure.[2] Chromatic typewriter types works of art A typewriter that paints? Artist Tyree Callahan modified this 1937 Underwood Standard typewriter to do just that, replacing each key with a different hue that can paint on paper. A chromatic typewriter isn't by any means practical (the keys have to be manually reloaded with paint) - but the concept is still pretty interesting. View all

How to Change the Name of a Wireless Network: 9 Steps Edit Article989,635 views 33 Editors Edited 19 days ago The wireless home network has become the primary way we connect to the Internet. When you set up your wireless network however, the default name (SSID) is often hard to remember, not to mention boring. You may also want to change your SSID to make your network harder to hack into. Often, router manufacturers may name the SSID the name of the company that made it, such as "Cisco" or "Belkin". Mind-reading scan identifies simple thoughts - health - 26 May 2011 A new new brain imaging system that can identify a subject's simple thoughts may lead to clearer diagnoses for Alzheimer's disease or schizophrenia – as well as possibly paving the way for reading people's minds. Michael Greicius at Stanford University in California and colleagues used functional magnetic resonance imaging (fMRI) to identify patterns of brain activity associated with different mental states. He asked 14 volunteers to do one of four tasks: sing songs silently to themselves; recall the events of the day; count backwards in threes; or simply relax.

Gerontology Gerontology (from the Greek γέρων, geron, "old man" and -λογία, -logy, "study of"; coined by Ilya Ilyich Mechnikov in 1903) is the study of the social, psychological and biological aspects of aging. It is distinguished from geriatrics, which is the branch of medicine that studies the diseases of older adults. Gerontologists include researchers and practitioners in the fields of biology, medicine, criminology, dentistry, social work, physical and occupational therapy, psychology, psychiatry, sociology, economics, political science, architecture, geography, pharmacy, nursing, public health, housing, and anthropology.[1] Gerontology encompasses the following: The multidisciplinary nature of gerontology means that there are a number of subfields, as well as associated fields such as psychology and sociology that overlap with gerontology.

10 Mind-Blowing Theories That Will Change Your Perception of the World Reality is not as obvious and simple as we like to think. Some of the things that we accept as true at face value are notoriously wrong. Scientists and philosophers have made every effort to change our common perceptions of it. The 10 examples below will show you what I mean. 1. Great glaciation. [ American Nihilist Underground Society (ANUS) What is the American Nihilist Underground Society? We are a loose-knit collaboration of writers, artists, programmers, sculptors, musicians and philosophers. We share a vision: that by removing human perspective (judgment, values, purposes, morals; what Nietzsche called "knowing") we can see the universe as an abstract design and appreciate the beauty of reality. Our goal is the rebirth of civilization through culture instead of commerce or moral dogma.

Downloads Current Stable Version The current stable release of GIMP is 2.8.18 (2016-07-14). We think your OS is Ubuntu. The end is always nigh in the human mind - opinion - 07 June 2011 Why are we so attracted to prophecies of doom, from religious raptures to environmental collapse? It's part of our psychology IN 1919, William Butler Yeats wrote The Second Coming, an allegory of the atmosphere in Europe after the carnage of the first world war. On Being Sane In Insane Places On Being Sane In Insane Places David L. Rosenhan How do we know precisely what constitutes “normality” or mental illness? Conventional wisdom suggests that specially trained professionals have the ability to make reasonably accurate diagnoses.

A Little Weird? Prone to Depression? Blame Your Creative Brain Whenever you want to do something extraordinary, risky, or scary in your life (something that you know in your heart that you need to do, but it would really be more convenient to ignore it and just not do it), it’s essential to surround yourself with inspiring, encouraging, like-minded people. If they’re leaders in their own right who to a certain degree have done what you long to do, even better. I first met Gwyneth Leech last summer at my nephew’s first birthday party in Brooklyn (she’s my sister’s husband’s cousin). We were chatting idly until the moment she mentioned that she, a lifelong artist, had “accidentally” started creating art on used coffee cups, drawing to pass time in PTA meetings. I get as excited about a great story as some women get about shoes, and my story sensors started shrieking immediately.

Friedrich Wilhelm Nietzsche (1844 - 1900) German philosopher and artist who deconstructed morality and celebrated the Romantic myth as an expression of life. "Nihilism stands at the door: whence comes this uncanniest of all guests?" In 1901, this question appeared in the first chapter of a posthumously published philosophical work called The Will To Power. The author of the book was Friedrich Wilhelm Nietzsche, a German philosopher and artist, renowned for his fiery outbursts on Christianity, moral conventions and contemporary modern society.