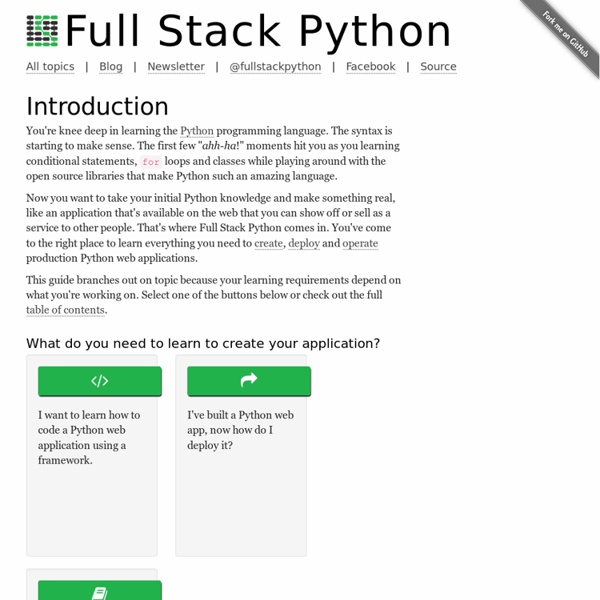 Encrypted SQLite Databases with Python and SQLCipher SQLCipher, created by Zetetic, is an open-source library that provides transparent 256-bit AES encryption for your SQLite databases. SQLCipher is used by a large number of organizations, including Nasa, SalesForce, Xerox and more. The project is open-source and BSD licensed. Python Syntax Rules Details Written by Noman Mubasher Category: Tutorials Hits: 538 Functional Programming HOWTO — Python 2.7.11 documentation In this document, we’ll take a tour of Python’s features suitable for implementing programs in a functional style. After an introduction to the concepts of functional programming, we’ll look at language features such as iterators and generators and relevant library modules such as itertools and functools. Introduction This section explains the basic concept of functional programming; if you’re just interested in learning about Python language features, skip to the next section. Programming languages support decomposing problems in several different ways:

Read Your First Meteor Application 1 Introduction There’s a lot to love about the Meteor JavaScript framework: You can build entire web applications with nothing but JavaScript. Your applications are real-time by default, similar to desktop applications. A thorough guide to SQLite database operations in Python -- written by Sebastian Raschka on March 7, 2014 After I wrote the initial teaser article "SQLite - Working with large data sets in Python effectively" about how awesome SQLite databases are via sqlite3 in Python, I wanted to delve a little bit more into the SQLite syntax and provide you with some more hands-on examples. Sections • Connecting to an SQLite database • Creating a new SQLite database - Overview of SQLite data types - A quick word on PRIMARY KEYS: • Adding new columns • Inserting and updating rows • Creating unique indexes • Querying the database - Selecting rows • Security and injection attacks • Date and time operations • Printing a database summary • Conclusion

Send An Email Using Python - Geeks Squad Gone are those days when we used to write letters carrying information and indeed they carried our emotions in the best way. But with the advent of era full of new technologies when people wanted some thing faster way of communications need of email and text messages came into picture. The science behind networking got so much empowered that very less people use written way of communications. We email our stuffs and we rely on the network technology for the messages to conveyed perfectly. Many a times while being in the IT industry we require an event when a email should be sent to a certain recipient when something has occurred. Automate the Boring Stuff with Python “You’ve just done in two hours what it takes the three of us two days to do.” My college roommate was working at a retail electronics store in the early 2000s. Occasionally, the store would receive a spreadsheet of thousands of product prices from its competitor. A team of three employees would print the spreadsheet onto a thick stack of paper and split it among themselves.

Get Your Development Team Started With Go June 30, 2014 · 5 Comments Here at DigitalOcean, Go is quickly becoming one of our favorite programming languages. After a few internal debates, I’ve distilled a few thoughts that I'd like to share with teams new to Go (or thinking of taking it on in the future). Using External Code How to Think Like a Computer Scientist — How to Think Like a Computer Scientist: Learning with Python 3 Version date: October 2012 by Peter Wentworth, Jeffrey Elkner, Allen B. Downey, and Chris Meyers Django Migrations - A Primer - Real Python What’s new in Django 1.7? Basically migrations. While there are some other nice features, the new migrations system is the big one. In the past you probably used South to handle database changes. untitled Nginx is pretty sweet, that's a rather obvious statement from me. There are already many nginx forks and contributions back to the original. I also happen to have quite a spot in my heart for Bottle. In my eyes, it's a framework that pretty much lets you forget you're working with the web. You get to write your application as if the web didn't exist and then tack on the templating.