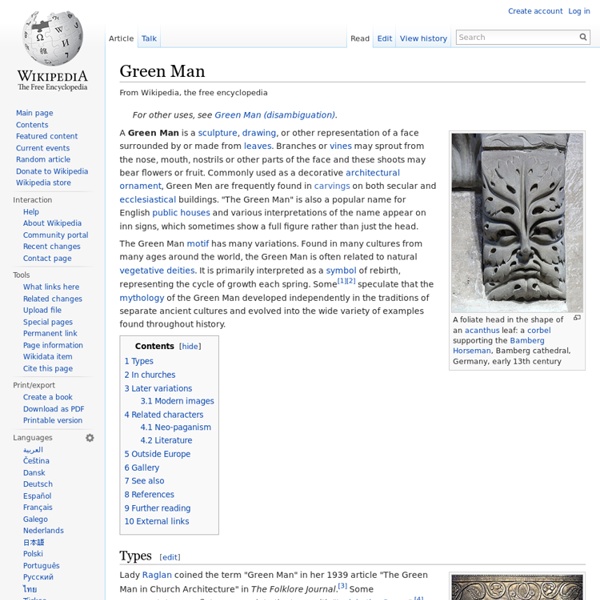 Types[edit] Lady Raglan coined the term "Green Man" in her 1939 article "The Green Man in Church Architecture" in The Folklore Journal.[3] Some commentators conflate or associate the term with "Jack in the Green".[4] Usually referred to in works on architecture as foliate heads or foliate masks, carvings of the Green Man may take many forms, naturalistic or decorative. The simplest depict a man's face peering out of dense foliage. Some may have leaves for hair, perhaps with a leafy beard. The Green Man appears in many forms, with the three most common types categorized as: the Foliate Head: completely covered in green leavesthe Disgorging Head: spews vegetation from its mouththe Bloodsucker Head: sprouts vegetation from all facial orifices (e.g. tear ducts, nostrils and mouth)[5][6] In churches[edit] To the modern observer the earlier (Romanesque and medieval) carvings often have an unnervingly eerie or numinous quality. Later variations[edit] Modern images[edit] Related characters[edit] Related:  Merlin / El hombre salvaje

Wild man - Wikipedia, la enciclopedia libre Wild men support coats of arms in the side panels of a portrait by Albrecht Dürer, 1499 (Alte Pinakothek, Munich) Terminology[edit] The first element of woodwose is usually explained as from wudu "wood", "forest". The second element is less clear. It has been identified as a hypothetical noun *wāsa "being", from the verb wesan, wosan "to be", "to be alive".[1] The Old English form is unattested, but it would have been *wudu-wāsa or *wude-wāsa. Late 15th century tapestry from Basel, showing a woodwose being tamed by a virtuous lady The term was usually replaced in literature of the Early Modern English period by classically-derived equivalents, or "wild man", but it survives in the form of the surname Wodehouse or Woodhouse (see Woodhouse family). Origins[edit] Figures similar to the European wild man occur worldwide from very early times. Pontus and his train disguised as wild men at the wedding of Genelet and Sidonia. Medieval representations[edit] Celtic mythology[edit] Shakespeare[edit]

Rosslyn Chapel - Wikipedia, the free encyclopedia - Nightly Rosslyn Chapel, formally known as the Collegiate Chapel of St Matthew, was founded on a small hill above Roslin Glen as a Catholic collegiate church (with between four and six ordained canons and two boy choristers) in the mid-15th century. Rosslyn Chapel and the nearby Roslin Castle are located at the village of Roslin, Midlothian, Scotland. The chapel was founded by William Sinclair, 1st Earl of Caithness (also spelled "Sainteclaire/Saintclair/Sinclair/St. Clair") of the Sinclair family, a noble family descended in part from Norman knights from the commune of Saint-Clair-sur-Epte in northern France, using the standard designs the medieval architects made available to him. Rosslyn Chapel is the third Sinclair place of worship at Roslin, the first being in Roslin Castle and the second (whose crumbling buttresses can still be seen today) in what is now Roslin Cemetery.[1] In later years the chapel has featured in speculative theories regarding Freemasonry and the Knights Templar.

Caradoc Caradoc Vreichvras (/kəˈrædək/[1] or /ˈkærədɒk/;[2] in modern Welsh spelling, Caradog Freichfras, meaning Caradoc Strong (or Stout) Arm) was a semi-legendary ancestor to the kings of Gwent. He lived during the 5th or 6th century. He is remembered in Arthurian legend as a Knight of the Round Table as Carados Briefbras (French 'Caradog Short Arm'). Identification and historicity[edit] Though the name "Caradoc" and its various forms were by no means uncommon during the Middle Ages, it is probable some of the Caradocs referred to in Welsh genealogies and hagiographies such the Life of St. Some archaeologists interpret Caradog Freichfras as a plausible historical figure, also known as Caradoc ap Ynyr, who was the ruler of Gwent around the 6th century, and was based at Caerwent, the earlier Roman town of Venta Silurum. Welsh Triads[edit] French romance[edit] All goes well until the wizard attempts to escape. References[edit] Bibliography[edit]

Elf In English literature of the Elizabethan era, "elves" became conflated with the "fairies" of Romance culture, so that the two terms began to be used interchangeably. Romanticist writers were influenced by this (particularly Shakespearean) notion of the "elf," and reimported the word Elf in that context into the German language. A number of ballads in the British Isles and Scandinavia, perhaps stemming from the medieval period, describe human encounters with the elf, elven-king, elf-maid, etc. Etymology In sister languages the forms are Old Norse álfr, Old High German alp (plural alpî, elpî) and Middle High German alp (feminine singular elbe, plural elbe, elber).[7] German cognates Onomastics In personal names In German heroic epic material, Alphart and Alphere (father of Walter of Aquitaine)[25][26] have been regarded as bearing the "elf" element in their names. Kennings In Skaldic poetry, the álfr word stem is used nearly always in a kenning for a warrior or a full-fledged man[28][29](e.g.

Giants (Welsh folklore) In the Mabinogi of Branwen ferch Llyr, Britain is ruled by the giant Bran the Blessed, who has never been able to fit inside any dwelling. In Culhwch and Olwen, giants feature as antagonists throughout. Ysbaddaden, chief of giants, is the father of Olwen, a beautiful maiden sought by Culhwch fab Cilydd, a cousin of King Arthur's. He is slain at the tale's close by his nephew Goreu fab Custennin,[2] while Wrnach, another giant, is killed by Cei. A well-known tale concerns Rhitta (or Rhudda) Gawr, a giant who held court in Snowdonia. Maelor Gawr, the giant of Castell Maelor, was captured in Cyfeilog, about twelve miles from his own castle and was sentenced to death. Maelor's son, Cornippin, who was hunting with his horse and his hound, heard the sound of his father's hand and lamented over his suffering. Cribwr the Giant lived in Castell Cefn Cribwr in Morgannwg. Cribwr take thy combs And cease with currish anger If I get a real chance—surely What they have had, thou shalt have too.

Brownie (folklore) Every manor house had its ùruisg, and in the kitchen, close by the fire was a seat, which was left unoccupied for him. One house on the banks of the River Tay was even until the beginning of the twentieth century believed to have been haunted by such a sprite, and one room in the house was for centuries called "Seòmar Bhrùnaidh" (Brownie’s room). In 1703, John Brand wrote in his description of Shetland (which he called "Zetland") that: “Not above forty or fifty years ago, every family had a brownie, or evil spirit, so called, which served them, to which they gave a sacrifice for his service; as when they churned their milk, they took a part thereof, and sprinkled every corner of the house with it, for Brownie’s use; likewise, when they brewed, they had a stone which they called ‘Brownie’s stane’, wherein there was a little hole into which they poured some wort for a sacrifice to Brownie. The Killmoulis was a similar creature which inhabited mills. Cheneque (native Mexican)